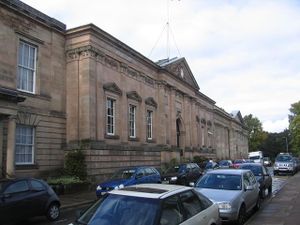 Shire Hall is a building complex located in the centre of Warwick, England. The original sections of the existing building were constructed between 1753 and 1758[1] having been designed by Sanderson Miller and built by local brothers William and David Hiorn.[2] Originally used for local governance and justice, today the building is the headquarters for Warwickshire County Council, the county courts having moved to a purpose built complex in Leamington Spa in 2010.[3]

Although Warwick was founded much, much earlier (see History of Warwick) it was not incorporated as a borough until 1545[5] and it was only in 1576 that justice became a borough matter rather than that of the earls.[6] Little is known about the hall first built on the site following this declaration except that £1,161 was levied for repairs and alterations (and the erection of a gaol next door) in May 1674 to be raised by taxes.[6] Work was undertaken by Mr William Hurlbert who had previously erected the town's Market Hall and refurbished Warwick Castle.[7] Due to the fact that it was a sturdy brick-built structure the hall survived the Great Fire of Warwick on 5 September 1694 which destroyed all the surrounding town centre buildings.[8]

The 1932 extension and beyond

The first major extension of the complex beyond the traditional hall and court rooms took place in 1932. Massively increasing its size they spread eastward towards the local barracks, onto the site where the Militia Hall once stood.[9] The building was brought up to its current size by construction of the council chambers and further offices in 1958 and a final expansion in 1966. The latter two developments are classic examples of Brutalist architecture.[10] Included in these alterations were the relocation of the Warwickshire County Emergency Centre, effectively a bunker allowing emergency council business to continue during wartime or terrorist attacks.[11] There are currently two man-made ponds located in the complex, one in the 1930s courtyard and another outside the 1966 section, with metallic sculptures of a heron and fishes added in 2000.[12]

The television series Father Brown was filmed in and around the Hall in 2013 and 2014.