Shmuel Yosef Agnon (Hebrew: שמואל יוסף עגנון‎) (July 17, 1888 – February 17, 1970) [1] was a Nobel Prize laureate writer and was one of the central figures of modern Hebrew fiction. In Hebrew, he is known by the acronym Shai Agnon (ש"י עגנון). In English, his works are published under the name S. Y. Agnon.

Agnon was born in Galicia, Austro-Hungarian Empire (today Ukraine). He later immigrated to Mandatory Palestine, and died in Jerusalem, Israel.

His works deal with the conflict between the traditional Jewish life and language and the modern world. They also attempt to recapture the fading traditions of the European shtetl (village). In a wider context, he also contributed to broadening the characteristic conception of the narrator's role in literature. Agnon shared the Nobel Prize with the poet Nelly Sachs in 1966.

Agnon was born Shmuel Yosef Halevi Czaczkes in Buczacz (Polish spelling, pronounced Buchach) or Butschatsch (German spelling), Galicia (then within the Austro-Hungarian Empire), now Buchach, Ukraine. Officially, his date of birth on the Hebrew calendar was 18 Av 5648 (July 26), but he always said his birthday was on the Jewish fast day of Tisha B'Av, the Ninth of Av.

His father, Shalom Mordechai Halevy, was ordained as a rabbi, but worked in the fur trade, and had many connections among the Hasidim. His mother's side had ties to the Mitnagdim.

He did not attend school and was schooled by his parents.[2] In addition to studying Jewish texts, Agnon studied writings of the Haskalah, and was also tutored in German. At the age of eight, he began to write in Hebrew and Yiddish. At the age of 15, he published his first poem – a Yiddish poem about the Kabbalist Joseph della Reina. He continued to write poems and stories in Hebrew and Yiddish, which were published in Galicia. 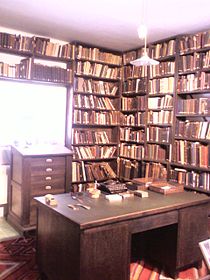 In 1908, he moved to Jaffa in Ottoman Palestine. The first story he published there was "Agunot" ("Forsaken Wives"), which appeared that same year in the journal Ha`omer. He used the pen name "Agnon," derived from the title of the story, which he adopted as his official surname in 1924. In 1910, "Forsaken Wives" was translated into German. In 1912, at the urging of Yosef Haim Brenner, he published a novella, "Vehaya Ha'akov Lemishor" ("The Crooked Shall Be Made Straight").

In 1913, Agnon moved to Germany, where he met Esther Marx (1889-1973). They married in 1920 and had two children. In Germany he lived in Berlin and Bad Homburg vor der Höhe (1921–24). Salman Schocken, a businessman and later also publisher, became his literary patron and freed him from financial worries. From 1931 on, his work was published by Schocken Books, and his short stories appeared regularly in the newspaper Haaretz, also owned by the Schocken family. In Germany, he continued to write short stories and collaborated with Martin Buber on an anthology of Hasidic stories. Many of his early books appeared in Buber's Jüdischer Verlag (Berlin). The mostly assimilated, secular German Jews, Buber and Franz Rosenzweig among them, considered Agnon to be a legitimate relic, being a religious man, familiar with Jewish scripture. Gershom Scholem called him "the Jews' Jew".[3]

In 1924, a fire broke out in his home, destroying his manuscripts and rare book collection. This traumatic event crops up occasionally in his stories. Later that year, Agnon returned to Palestine and settled with his family in the Jerusalem neighborhood of Talpiot. In 1929, his library was destroyed again during anti-Jewish riots.[4]

When his novel Hachnasat Kalla ("The Bridal Canopy") appeared in 1931 to great critical acclaim, Agnon's place in Hebrew literature was assured.[5] In 1935, he published "Sippur Pashut" ("A Simple Story"), a novella set in Buczacz at the end of the 19th century. Another novel, "Tmol Shilshom" ("Only Yesterday"), set in Eretz Yisrael (Israel) of the early 20th century, appeared in 1945.

Agnon's writing has been the subject of extensive academic research. Many leading scholars of Hebrew literature have published books and papers on his work, among them Baruch Kurzweil, Dov Sadan, Nitza Ben-Dov, Dan Miron, and Dan Laor. Agnon writes about Jewish life, but with his own unique perspective and special touch. In his Nobel acceptance speech, Agnon claimed "Some see in my books the influences of authors whose names, in my ignorance, I have not even heard, while others see the influences of poets whose names I have heard but whose writings I have not read." He went on to detail that his primary influences were the stories of the Bible.[6] Agnon acknowledged that he was also influenced by German literature and culture, and European literature in general, which he read in German translation. A collection of essays on this subject, edited in part by Hillel Weiss, with contributions from Israeli and German scholars, was published in 2010: Agnon and Germany: The Presence of the German World in the Writings of S.Y. Agnon. The budding Hebrew literature also influenced his works, notably that of his friend, Yosef Haim Brenner. In Germany, Agnon also spent time with the Hebraists Hayim Nahman Bialik and Ahad Ha'am.

The communities he passed through in his life are reflected in his works:

Nitza Ben-Dov writes about Agnon's use of allusiveness, free-association and imaginative dream-sequences, and discusses how seemingly inconsequential events and thoughts determine the lives of his characters.[7]

Some of Agnon's works, such as The Bridal Canopy, And the Crooked Shall Be Made Straight, and The Doctor's Divorce, have been adapted for theatre. A play based on Agnon's letters to his wife, "Esterlein Yakirati", was performed at the Khan Theater in Jerusalem.

Agnon's writing often used words and phrases that differed from what would become established modern Hebrew. His distinct language is based on traditional Jewish sources, such as the Torah and the Prophets, Midrashic literature, the Mishnah, and other Rabbinic literature. Some examples include:

Bar-Ilan University has made a computerized concordance of his works in order to study his language.

In 1966, he was awarded the Nobel Prize in Literature "for his profoundly characteristic narrative art with motifs from the life of the Jewish people".[12] The prize was shared with German Jewish author Nelly Sachs. In his speech at the award ceremony, Agnon introduced himself in Hebrew: "As a result of the historic catastrophe in which Titus of Rome destroyed Jerusalem and Israel was exiled from its land, I was born in one of the cities of the Exile. But always I regarded myself as one who was born in Jerusalem".[13]

In later years, Agnon's fame was such that when he complained to the municipality that traffic noise near his home was disturbing his work, the city closed the street to cars and posted a sign that read: "No entry to all vehicles, writer at work!"[14] 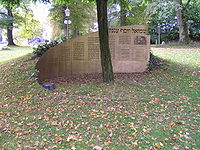 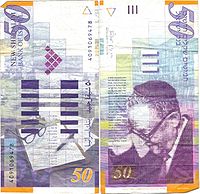 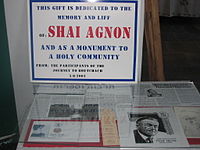 Agnon died in Jerusalem on February 17, 1970. His daughter, Emuna Yaron, has continued to publish his work posthumously. Agnon's archive was transferred by the family to the National Library in Jerusalem. His home in Talpiot, built in 1931 in the Bauhaus style, was turned into a museum, Beit Agnon.[15] The study where he wrote many of his works was preserved intact.[16] Agnon's image, with a list of his works and his Nobel Prize acceptance speech, appeared on the fifty-shekel bill, second series, in circulation from 1985 to 2014. The main street in Jerusalem's Givat Oranim neighborhood is called Sderot Shai Agnon, and a synagogue in Talpiot, a few blocks from his home, is named after him.

A Jewish school in Beachwood, Ohio was called the Agnon School and was named after Agnon. However, on August 25, 2015, they changed the name to the Joseph and Florence Mandel Jewish Day School.

After Agnon's death, the former mayor of Jerusalem Mordechai Ish-Shalom initiated the opening of his home to the public. In the early 1980s, the kitchen and family dining room were turned into a lecture and conference hall, and literary and cultural evenings were held there. In 2005, the Agnon House Association in Jerusalem renovated the building, which reopened in January 2009. The house was designed by the German-Jewish architect Fritz Korenberg, who was also his neighbor.[4]

In 1977 the Hebrew University published Yiddish Works, a collection of stories and poems that Agnon wrote in Yiddish during 1903–1906.