From Infogalactic: the planetary knowledge core
Jump to: navigation, search
For other uses, see Shock and Awe (disambiguation).

Shock and awe (technically known as rapid dominance) is a military doctrine based on the use of overwhelming power and spectacular displays of force to paralyze the enemy's perception of the battlefield and destroy its will to fight.[1][2] The doctrine was written by Harlan K. Ullman and James P. Wade in 1996 and is a product of the National Defense University of the United States.[2][1]

Rapid dominance is defined by its authors, Harlan K. Ullman and James P. Wade, as attempting

"to affect the will, perception, and understanding of the adversary to fight or respond to our strategic policy ends through imposing a regime of Shock and Awe."[3]

"impose this overwhelming level of Shock and Awe against an adversary on an immediate or sufficiently timely basis to paralyze its will to carry on ... [to] seize control of the environment and paralyze or so overload an adversary's perceptions and understanding of events that the enemy would be incapable of resistance at the tactical and strategic levels."[4]

Shock and awe is most consistently used by Ullman and Wade as the effect that rapid dominance seeks to impose upon an adversary. It is the desired state of helplessness and lack of will. It can be induced, they write, by direct force applied to command and control centers, selective denial of information and dissemination of disinformation, overwhelming combat force, and rapidity of action.

The doctrine of rapid dominance has evolved from the concept of "decisive force". Ullman and Wade contrast the two concepts in terms of objective, use of force, force size, scope, speed, casualties, and technique.

Civilian casualties and destruction of infrastructure

Although Ullman and Wade claim that the need to "[m]inimize civilian casualties, loss of life, and collateral damage" is a "political sensitivity [which needs] to be understood up front", their doctrine of rapid dominance requires the capability to disrupt "means of communication, transportation, food production, water supply, and other aspects of infrastructure",[8] and, in practice, "the appropriate balance of Shock and Awe must cause ... the threat and fear of action that may shut down all or part of the adversary's society or render his ability to fight useless short of complete physical destruction."[9]

Using as an example a theoretical invasion of Iraq 20 years after Operation Desert Storm, the authors claimed, "Shutting the country down would entail both the physical destruction of appropriate infrastructure and the shutdown and control of the flow of all vital information and associated commerce so rapidly as to achieve a level of national shock akin to the effect that dropping nuclear weapons on Hiroshima and Nagasaki had on the Japanese."[10]

Reiterating the example in an interview with CBS News several months before Operation Iraqi Freedom, Ullman stated, "You're sitting in Baghdad and all of a sudden you're the general and 30 of your division headquarters have been wiped out. You also take the city down. By that I mean you get rid of their power, water. In 2, 3, 4, 5 days they are physically, emotionally and psychologically exhausted."[11] 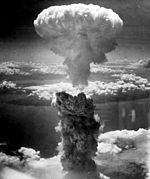 According to its original theorists, shock and awe renders an adversary unwilling to resist through overwhelming displays of power. Ullman cites the atomic bombings of Hiroshima and Nagasaki (Nagasaki is pictured) as an example of shock and awe.

Ullman and Wade argue that there have been military applications that fall within some of the concepts of shock and awe. They enumerate nine examples:

Before the 2003 invasion of Iraq, United States armed forces officials described their plan as employing shock and awe.[12]

Prior to its implementation, there was dissent within the Bush Administration as to whether the shock and awe plan would work. According to a CBS News report, "One senior official called it a bunch of bull, but confirmed it is the concept on which the war plan is based." CBS Correspondent David Martin noted that during Operation Anaconda in Afghanistan in the prior year, the U.S. forces were "badly surprised by the willingness of al Qaeda to fight to the death. If the Iraqis fight, the U.S. would have to throw in reinforcements and win the old fashioned way by crushing the Republican Guards, and that would mean more casualties on both sides."[13]

Continuous bombing began on March 19, 2003 as United States forces unsuccessfully attempted to kill Saddam Hussein. Attacks continued against a small number of targets until March 21, 2003, when, at 1700 UTC, the main bombing campaign of the US and their allies began. Its forces launched approximately 1700 air sorties (504 using cruise missiles).[14] Coalition ground forces had begun a "running start" offensive towards Baghdad on the previous day. Coalition ground forces seized Baghdad on April 5, and the United States declared victory on April 14. The term "shock and awe" is typically used to describe only the very beginning of the invasion of Iraq, not the larger war, nor the ensuing insurgency.

To what extent the United States fought a campaign of shock and awe is unclear as post-war assessments are contradictory. Within two weeks of the United States' victory declaration, on April 27, The Washington Post published an interview with Iraqi military personnel detailing demoralization and lack of command.[15] According to the soldiers, Coalition bombing was surprisingly widespread and had a severely demoralizing effect. When United States tanks passed through the Iraqi military's Republican Guard and Special Republican Guard units outside Baghdad to Saddam's presidential palaces, it caused a shock to troops inside Baghdad. Iraqi soldiers said there was no organization intact by the time the United States entered Baghdad and that resistance crumbled under the presumption that "it wasn't a war, it was suicide."

In contrast, in an October 2003 presentation to the United States House Committee on Armed Services, staff of the United States Army War College did not attribute their performance to rapid dominance. Rather, they cited technological superiority and "Iraqi ineptitude". The speed of the coalition's actions ("rapidity"), they said, did not affect Iraqi morale. Further, they said that Iraqi armed forces ceased resistance only after direct force-on-force combat within cities.[16]

According to National Geographic researcher Bijal Trivedi, "Even after several days of bombing the Iraqis showed remarkable resilience. Many continued with their daily lives, working and shopping, as bombs continued to fall around them. According to some analysts, the military's attack was perhaps too precise. It did not trigger shock and awe in the Iraqis and, in the end, the city was only captured after close combat on the outskirts of Baghdad."[17]

According to The Guardian correspondent Brian Whitaker in 2003, "To some in the Arab and Muslim countries, Shock and Awe is terrorism by another name; to others, a crime that compares unfavourably with September 11."[18] Anti-war protesters in 2003 also claimed that "the shock and awe pummeling of Baghdad [was] a kind of terrorism."[19]

A dossier released by Iraq Body Count, a project of the U.K. non-governmental non-violent and disarmament organization Oxford Research Group, attributed approximately 6,616 civilian deaths to the actions of U.S.-led forces during the "invasion phase", including the shock-and-awe bombing campaign on Baghdad.[20]

These findings were disputed by both the U.S. military and the Iraqi government. Lieutenant Colonel Steve Boylan, the spokesman for the U.S. military in Baghdad, stated, "I don't know how they are doing their methodology and can't talk to how they calculate their numbers," as well as "we do everything we can to avoid civilian casualties in all of our operations."[21] National Geographic researcher Bijal Trivedi stated, "Civilian casualties did occur, but the strikes, for the most part, were surgical."[17]

Following the United States' invasion of Iraq in 2003, the term "shock and awe" has been used for commercial purposes. The United States Patent and Trademark Office received at least 29 trademark applications in 2003 for exclusive use of the term.[22] The first came from a fireworks company on the day the United States started bombing Baghdad. Sony registered the trademark the day after the beginning of the operation for use in a video game title, but later withdrew the application and described it as "an exercise of regrettable bad judgment."[23] It is also the name of a level in the video game Call of Duty 4: Modern Warfare, in which United States Marine Corps execute the strategy in an unnamed Middle Eastern country, before themselves falling victim to a nuclear blast. The term is also used as an achievement in the popularly acclaimed game Starcraft 2, where it is obtained when a certain amount of units die to the tactical strike craft whilst invisible. It is also the name of an achievement in Gears of War 2 and Miss Fortune's weapons in League of Legends. Miscellaneous other uses of the term include golf equipment, an insecticide, a set of bowling balls, a racehorse, a shampoo, condoms, and heroin.

In an interview, Harlan Ullman stated that he believed that using the term to try to sell products was "probably a mistake," and "the marketing value will be somewhere between slim and none."[24]

Max Brooks' 2006 post-apocalyptic horror novel World War Z: An Oral History of the Zombie War contains a pointed criticism of "Shock and Awe" tactics, in the chapter relating the defeat of the U.S. military by a zombie horde numbering in the millions at the cataclysmic Battle of Yonkers. Brooks' criticism is that Shock and Awe tactics are essentially a relic of Cold War strategies for fighting the Soviet Union in the Fulda Gap of West Germany, and are not effective for combating guerrilla fighters in protracted insurgencies. Particularly, Brooks' point is that the entire concept of shock and awe is rendered moot when facing enemy combatants who have no fear of death, be they zombies, kamikaze pilots, or suicide bombers.