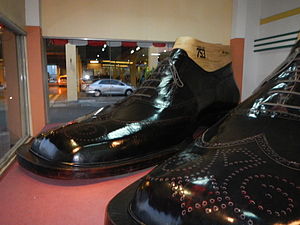 A shoe size is an alphanumerical indication of the fitting size of a shoe for a person. Often it just consists of a number indicating the length because many shoemakers only provide a standard width for economic reasons. There are several different shoe-size systems that are used worldwide. These systems differ in what they measure, what unit of measurement they use, and where the size 0 (or 1) is positioned. Only a few systems also take the width of the feet into account. Some regions use different shoe-size systems for different types of shoes (e.g., men's, women's, children's, sport, or safety shoes).

Foot versus shoe and last

The length of a foot is commonly defined as the distance between two parallel lines that are perpendicular to the foot and in contact with the most prominent toe and the most prominent part of the heel. Foot length is measured with the subject standing barefoot and the weight of the body equally distributed on both feet.

The sizes of the left and right feet are often slightly different. In this case, both feet are measured, and purchasers of mass-produced shoes are advised to purchase a shoe size based upon the larger foot because, contrary to the reality of foot sizes, most manufacturers do not sell pairs of shoes in non-matching sizes. Each size of shoe is considered suitable for a small interval of foot lengths. The inner cavity of a shoe must typically be 15–20 mm longer than the foot, but this relation varies between different types of shoes.

A shoe-size system can refer to three characteristic lengths:

All these measures differ substantially from one another for the same shoe.

Sizing systems also differ in what units of measurement they use. This also results in different increments between shoe sizes because usually, only "full" or "half" sizes are made.

Due to the different units of measurements, converting between different sizing systems results in rounding errors as well as unusual sizes such as "​10 2⁄3".

The sizing systems also place size 0 (or 1) at different locations:

Some systems also include the width of a foot. There are different methods indicating the width:

The width for which these sizes are suitable can vary significantly between manufacturers. The A-E width indicators used by most American, Canadian, and some British shoe manufacturers are typically based on the width of the foot, and common step sizes are ​3⁄16 inch.

The International Standard is ISO 9407:1991, "Shoe sizes—Mondopoint system of sizing and marking",[2] which recommends a shoe-size system known as Mondopoint.

Because Mondopoint also takes the foot width into account, it allows for better fitting than most other systems. It is, therefore, used by NATO and other military services. Mondopoint is also used for ski boots.

European standard EN 13402, used also for clothes, recommends instead that shoes be labelled with the interval of foot lengths for which they are suitable, measured in centimetres.

Shoe size in the United Kingdom and Ireland is based on the length of the last used to make the shoes, measured in barleycorn (​1⁄3 inch) starting from the smallest size deemed practical, which is called size zero. It is not formally standardised. Note that the last is typically longer than the foot heel to toe length by about 1/2 to ⅔ inch (13 to 17 mm).

An adult size one is then the next size up (​8 2⁄3 in or 22.01 cm) and each size up continues the progression in barleycorns.[3] The calculation for an adult shoe size in the UK is thus:

Note: some manufacturers choose to use a constant other than 25, so sizes do vary in either direction e.g. A shoe marked as a European size 40 may also be marked as a UK: 6 by Jimmy Choo, Nike; a ​6 1⁄2 by Adidas, Clarks, Dr Martens, Fred Perry, Karrimor, Monsoon, New Balance, Reebok, and Slazenger; a 7 by Converse, Gap, Pavers, and Timberland; and a ​7 1⁄2 by Crocs.

For men and children's footwear the UK system is followed. Women's footwear has a slightly different sizing that is unique. It is in between the UK and US's sizings.[citation needed]

In North America, there are different systems that are used concurrently. The size indications are usually similar but not exactly equivalent especially with athletic shoes at extreme sizes.

So the calculation for a male shoe size in the USA or Canada is:

Children's sizes are equal to men's sizes plus ​12 1⁄3. Children’s sizes do not differ by gender even though adults’ do.

Children's shoe stores in the United States and Canada use a sizing scheme which ends at 13, after which the adult range starts at 1. 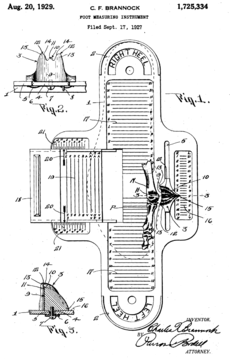 A slightly different sizing method is based on the Brannock Device, a measuring instrument invented by Charles F. Brannock in 1925 and now found in many shoe stores. The formula used by the Brannock device assumes a foot length ⅔ inch (1.7 cm) less than the length of the last; thus, men's size 1 is equivalent to a foot's length of 7 ⅔ inches.[4] Women's sizes are one size up.

The method also measures the length of the distance of the heel and the widest point of the foot. For that purpose, the device has another, shorter scale at the side of the foot. If this scale indicates a larger size, it is taken in place of the foot's length.[6]

For children's sizes, additional wiggle room is added to allow for growth.[6]

The device also measures the width of the foot and assigns it designations of AAA, AA, A, B, C, D, E, EE, or EEE. The widths are 3/16 in apart and differ by shoe length.[4]

Some shoe stores use optical devices to precisely measure the length and width of both feet and recommend the appropriate shoe model and size. [1]

The Continental European system is used in France, Germany,[7] Italy, Spain,[8] and most other continental European countries. It is also used in Middle Eastern countries (like Iran), Brazil—which uses the same method but subtracts 2 from the final result—[citation needed] and, commonly, Hong Kong.

In this system, the shoe size is the length of the last, expressed in Paris points, for both sexes and for adults and children alike. Because a Paris point is ⅔ of a centimetre, the formula is as follows:

To compute the size based on actual foot length, one must first add a length of about 1.5 to 2 cm. For instance, for a shoe having an internal length 1.5 cm longer than the foot:

The foot length is indicated in centimetres; an increment of 5 mm is used. This system was also used in the GDR.

The length is followed by designators for girth (A, B, C, D, E, EE, EEE, EEEE, F, G), which is taken from a table indexed to girth and length. There are different tables for men's, women's, and children's (less than 12 years of age) shoes. The tables also include the width as supplemental indications. Not all designators are used for all genders and in all countries. For example, the largest girth for women in China is EEEE, whereas in Japan, it is F.

Shoes are sized either according to the foot length they are intended to fit, in cm, or alternatively to another variation of the barleycorn system, with sizes calculated approximately as:

Historically the USSR used the European (Paris point) system but an alternate metric system (State Standard 3927–64) was devised, with shoe sizes increasing in ½ rather than the ⅔ cm intervals found in the European scheme. This system has been refined by later standards:

Where used this system is sometimes described as a Pointe (ballet shoe) or Stych size: