Shoegazing (also known as shoegaze) is a subgenre of alternative rock that emerged from the United Kingdom in the late 1980s and reached peak popularity in the early 1990s. The style is typified by significant use of distortion, feedback, obscured vocals and the blurring of component musical parts into indistinguishable "walls of sound".[1] The term "shoegazing" was initially devised by the British music press as a gibe meant to ridicule the stage presence of a wave of groups who stood still during live performances in a detached, introspective, non-confrontational state, often with their heads down;[1][2] the heavy use of effects pedals also contributed to the image of performers looking down at their feet during concerts. The term was often used contemporaneously with "dream pop."[3][4][5]

A loose label given to the shoegazing scene and other affiliated bands in London in the early 1990s was The Scene That Celebrates Itself. In the early 1990s, shoegazing groups were pushed aside by the American grunge movement and early Britpop acts such as Suede, forcing the relatively unknown bands to break up or reinvent their style altogether.[1] In the 2000s, there was renewed interest in the genre among "nu gaze" bands. 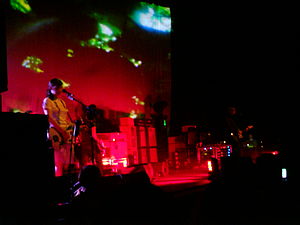 My Bloody Valentine performing live in 2008

Common musical elements of shoegazing consist of distortion, droning riffs and a "wall of sound" from noisy guitars. Typically, two distorted rhythm guitars are played together to give an amorphous quality to the sound. Although lead guitar riffs were often present, they were not the central focus of most shoegazing songs.

Vocals are typically subdued in volume and tone, but a strong sense of melody generally exists underneath the layers of guitars. However, lyrics are not emphasized, nor are vocals.[6] While the genres that influenced shoegazing often used drum machines, shoegazing more often features live drumming.

The name was coined in a review in Sounds of a concert by the newly formed Moose in which singer Russell Yates read lyrics taped to the floor throughout the gig.[7] The term was picked up by the NME, who used it as a reference to the tendency of the bands' guitarists to stare at their feet—or their effects pedals—while playing, seemingly deep in concentration. Melody Maker preferred the more staid term The Scene That Celebrates Itself, referring to the habit that the bands had of attending gigs of other shoegazing bands, often in Camden, and often moonlighting in each other's bands:

The shatteringly loud, droning neo-psychedelia the band performed was dubbed shoegazing by the British press because the bandmembers stared at the stage while they performed.[1]

The term was often considered pejorative, especially by the English weekly music press who considered the movement as ineffectual, and it was disliked by many of the groups it purported to describe.

Shoegazing was originally a slag-off term. My partner [K.J. "Moose" McKillop], who was the guitarist in Moose, claims that it was originally leveled at his band. Apparently the journo was referring to the bank of effects pedals he had strewn across the stage that he had to keep staring at in order to operate. And then it just became a generic term for all those bands that had a big, sweeping, effects-laden sound, but all stood resolutely still on stage. – Miki Berenyi[6]

Ride's singer Mark Gardener had a different take on the groups' static presentation:

"We didn't want to use the stage as a platform for ego, like the big bands of the time did, like U2 and Simple Minds. We presented ourselves as normal people, as a band who wanted their fans to think they could do that, too."[2]

The most commonly cited precursors to shoegazing are the Cocteau Twins,[1][8] The Jesus and Mary Chain, A.R. Kane,[9][10] My Bloody Valentine, Spacemen 3 and Loop. Common musical threads between the different bands included garage rock, '60s psych, and American indie bands like Sonic Youth and Dinosaur Jr.[6]

The first bands to attract the shoegazing label (Catherine Wheel, Slowdive, Swervedriver, Chapterhouse, Ride, Moose, Lush and Pale Saints) were largely influenced by My Bloody Valentine, and emerged in the wake of that band's 1988 breakthrough (with the "You Made Me Realise" single and album Isn't Anything).[1][11] The shoegazing label has more recently been applied to My Bloody Valentine themselves, although Kevin Shields stated that the band had never used any chorus, flanger or delay effects pedals.[12][13] Other artists that have been identified as influences on shoegazing include The Velvet Underground, Sonic Youth, Hüsker Dü, The Chameleons, The Cure,[14] Bauhaus,[12] Galaxie 500,[15] and The Smiths.[6]

Michael Azerrad's book Our Band Could Be Your Life cites an early 1990s Dinosaur Jr. tour of the United Kingdom as a key influence.[16] While not classified as a shoegazing band, Dinosaur Jr. did share a tendency to blend poppy melody with loud guitars and laconic vocals. A lengthy 1992 US tour featuring My Bloody Valentine, Dinosaur Jr. and Yo La Tengo raised the genre's profile in the US considerably.

The Scene That Celebrates Itself

Main article: The Scene That Celebrates Itself

A general description given to shoegazing and other affiliated bands in London in the early 1990s was The Scene That Celebrates Itself. The first stirrings of recognition came when indie writer Steve Lamacq referred to Ride in an NME review as "The House of Love with chainsaws". The shoegazing genre label was quite often misapplied. As key bands such as Slowdive, Chapterhouse and Ride emerged from the Thames Valley, Swervedriver found themselves labelled shoegazers on account of their own Thames Valley origins, despite their more pronounced Hüsker Dü-meets-Stooges stylings.[19]

The coining of the term "The Scene That Celebrates Itself" was in many ways the beginning of the end for the first wave of shoegazers. The bands became perceived by critics as over-privileged, self-indulgent and middle-class.[6] This perception was in sharp contrast with both the bands who formed the wave of newly commercialised grunge music which was making its way across the Atlantic, as well as those bands who formed the foundation of Britpop, such as Pulp, Oasis, Blur and Suede.[2] Britpop also offered intelligible lyrics, often about the trials and tribulations of working-class life; this was a stark contrast to the "vocals as an instrument" approach of the shoegazers, which often prized the melodic contribution of vocals over their lyrical depth. Lush's final album was an abrupt shift from shoegazing to Britpop, which alienated many fans; the 1996 suicide of their drummer signaled Lush's dissolution. Following a long gap from My Bloody Valentine since Loveless, aside from their 2008 reunion tour, the band released MBV in February 2013. Frontman Kevin Shields explained their silence by noting, "I never could be bothered to make another record unless I was really excited by it."[20]

Slowdive eventually morphed into the country-infused Mojave 3 and the dream pop Monster Movie, while other shoegazing bands either split or moved in other directions. The Verve (at the time known simply as "Verve") moved towards mainstream rock on their 1997 album Urban Hymns, before singer Richard Ashcroft released a number of solo albums. The Verve later reunited and released a new album, Forth. Mark Gardener and Loz Colbert of Ride released an album as The Animalhouse; in 2006, Gardener's first solo album was issued. The use of electronic dance and ambient elements by bands such as Slowdive and Seefeel paved the way for later developments in post-rock and electronica.[6] Several former members of shoegazing bands later moved towards post-rock and the more electronica-based trip hop.[2] Adam Franklin of Swervedriver released lo-fi albums under the moniker Toshack Highway.[21]

A resurgence of the genre began in the late 1990s (particularly in the United States) and the early 2000s, that helped usher in what is now referred to as the "nu gaze" era.[2] Also various heavy metal acts were inspired by shoegazing, which contributed to the emergence of "post-metal" and "metalgaze" styles.[22][23] Particularly in the mid-2000s, French black metal acts Alcest and Amesoeurs began incorporating shoegazing elements into their sound, pioneering the blackgaze genre.[24]