An outdoor shooting range with a sheltered shooting stand and several other unsheltered stands. The targets are placed at the foot of the mountain, which the photo is taken from. This particular range is in use by both civilians and by the Swedish Army Norrbotten Regiment. 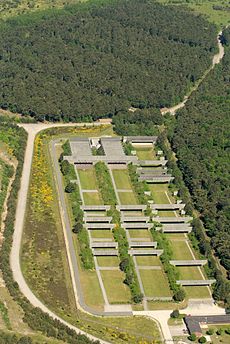 Aerial view of a shooting range in Cuxhaven-Altenbruch, Germany (2012)

A shooting range or firing range is a specialized facility designed for firearms practice. Each facility is typically overseen by one or more supervisory personnel, called variously a range master or "Range Safety Officer" (RSO) in the United States or a range conducting officer (RCO) in the UK. These supervisory personnel are responsible for ensuring that all weapon safety rules are followed at all times.

Shooting ranges can be indoor or outdoor and possibly restricted to certain types of firearms, e.g. handguns only or rifles, or they can specialize in certain shooting sports such Skeet shooting or 10 m Air Pistol/Rifle.

Likewise, in countries with gun laws heavily restricting the ownership and use of actual firearms, Airsoft guns often are used instead for "shooting range" practice. By their nature, "shooting ranges" for Airsoft competitions may be located nearly everywhere, even in-doors, with no significant restrictions other than the wearing of protective face masks. This article, and the articles for specific locales, do not address "shooting ranges" intended for Airsoft guns.[citation needed] 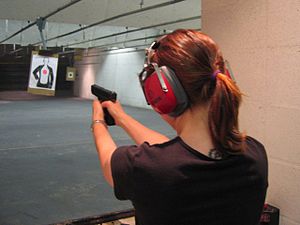 Indoor ranges usually have a back wall with a sloped earthen berm or bank, with reinforced baffles additionally situated along the roof and side walls. Ranges with proper ventilation pull smoke and lead particles away from the shooting line and discharge them from the building to reduce potential lead poisoning.[1] When ranges lack proper ventilation, employees and users are exposed to lead dust from bullets or cartridge primers. It can be inhaled or can settle on skin or clothing.[2] Additionally, discharge of firearms in indoor ranges can produce noise levels of over 140 dB sound pressure level.[3] To combat this, it is commonly recommended to "double up" ear protection by using both earplugs and over the head earmuffs. To protect range bystanders from sound exposure, many modern ranges have an air-locked corridor for sound-proofing, with two doors at opposite ends of the egress corridor. Most indoor ranges restrict the use of certain powerful calibers, rifles or the use of fully automatic weapons. In many shooting ranges, .50 caliber or higher bullets are not allowed. 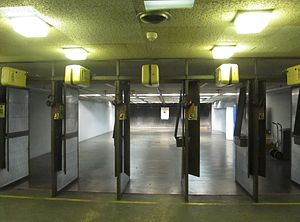 Shooting galleries appeared following development of rimfire ammunition in the 19th century. Small caliber gallery guns could be easily reloaded providing an opportunity for recreational shooting without the noise, painful recoil, and tiresome reloading procedure required with contemporary muzzleloaders. Shooting galleries became a common feature of Gilded Age amusement parks, and portable bullet traps were later constructed to allow this entertainment with traveling carnivals for locations including fairgrounds. Early shooting galleries typically included several shooting positions for pump action .22 caliber rifles.[4] Durable steel or cast iron targets indicated hits by tipping over or rotating around a horizontal mounting rod. Target distances were short enough to make such movement obvious—as little as 10 feet (3 meters) for portable carnival galleries. The muzzle of each rifle was often chained to a slightly down-range attachment to prevent the rifle from being aimed to miss the bullet trap and threaten bystanders.[5] Injuries from molten lead bullet fragments or ricochets off metal targets or bullet traps encouraged development of frangible bullets in specialized gallery loads including Peters Krumble Ball, Remington Spatter-Less, Western Kant-Splash, and Winchester Spatterpruf.[6] Risk of accidental injuries within crowded amusement parks and carnivals encouraged replacement of firearms by air guns during the late 20th century; and by the 21st century those were largely replaced by simulated firearms using thermographic camera or servomechanism target interactions.

Outdoor shooting ranges are used for longer distance shooting up to or exceeding 1,200 yards (1,097 m). Training might also specifically require exposure to the elements such as wind or rain. Competition shooting is preferred under benign weather conditions, although conditions may change, competition is only abandoned when safety becomes an issue.

Outdoor shooting ranges are designed to contain all fired shots. This necessitates, behind the target line a high retaining wall called a back-stop or stop-butt being an earth mound, sandbag barrier or specially designed funnel-shaped traps to catch and prevent misaligned shots, errant projectile ricochet or shots going beyond the bounds of the shooting range. Most outdoor ranges will restrict the maximum caliber size and / or projectile energy based on the design specification of the range. Some target shooting ranges have separate facilities devoted for use of higher-powered firearms such as .50 calibre.

Air rifle
Outdoor air rifle ranges can be fixed distance such as 10 metres (11 yd) or 25 metres (27 yd) or be an area for the practice of the sport of Field Target shooting where reset metal targets are placed in natural surroundings at various distance and elevations with a pellet trap behind the target.

Full-Bore Rifle
Target shooting range for larger calibre centrefire rifles are no shorter than 100 metres (109 yd) except in the case of “Zero” ranges used for setting or checking the open (iron) or aperture (peep) sights of the rifle and telescopic sight “Zero”. Military ranges are typically at least 500 metres (547 yd) -1,000 metres (1,094 yd) to safely accommodate the range of most rifles. Public ranges can be as long as and typically accommodate hunters and sportsman participating in sports such as 300 m Standard Rifle, metallic silhouette or benchrest shooting (ranges up to 2,000 yards (1,829 m).

A "fixed firing point" or echelon[8] rifle range is where the targets are located at the various distances with the marksman or woman shooting from the one firing point. The most advanced rifle range of this design was constructed for the Commonwealth Games New Delhi 2010.[9]

The firing point cover can be as simple as a tent, to a frame with only a roof (to keep off rain or sunshine) to a substantial building with appropriate apertures to shoot through. 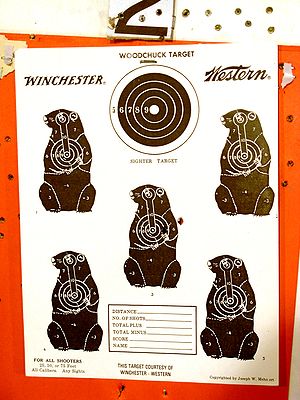 Civilian Targets are usually made of paper or a plastic coreflute, sometimes with a canvas or hessian back on the larger long range types. Most competitive targets are a solid black circle on a white background. The black circle may have scoring rings. Targets of other shapes may be used such as used in pistol (hand gun) target shooting. Reactive targets allow shooters to easily identify bullet strikes. This allows shooters to improve their skills by quickly being able to compare their aiming point and where the actual bullet impacted the target.

Those who choose to use military surplus rifles in competition on firing ranges at set distances include bolt and semiautomatic actions, with targets used as per military standards, current and historic. The same applies for the matches they shoot. Older bolt action matches fall into, A number of countries have recently limited the use by civilian populations of the semi and full automatic firearms, to the detriment of competition at an international level.Other target types include a metal plate that is knocked over by the bullet such as in the air rifle sport of Field Target or handgun discipline of IPSC, and stationary metal plates of scaled animal outlines on which bullet strikes mark as well as those that mark the paint which is painted over again after scoring.

The butts / backstop is the area behind the target into which the shot impacts having passed through the target. Outdoor and sometimes indoor ranges have earth or sand butts. Indoor ranges can use angled plates with collectors, often with a rubber curtain through which the bullet passes and is then stopped by a metal plate.

They need to of sufficient height to capture the projectile intended for the target as well as any ricochet that may occur from the projectile striking the floor of the target range fairway. Usually the top is at least five degrees in elevation from the 100m firing line.

Outdoor shooting ranges sometimes have wind flags, positioned between the firing line (where the shooters are) and the targets. Shooters observe these flags to make an estimate of wind speed, which is then converted into lateral minute of angle point of aim corrections or, alternatively, windage holdoff corrections.

Multiple flags are required for two reasons. First, the wind speed closest to the midpoint of range has the greatest effect on the projectile.[14] In addition, the wind at one part of the range will not always be the same at another part.

Wind flags are not always actual flags, sometimes streamers are used, small triangle flags, or even pin wheels. Factors such as the range length and expected strength of the wind determine the best type of flag to use. When no flags are available, a small leaf or other small light object can be dropped from shoulder height, and the object is then pointed at by the shooter; the angle between his arm and his torso can provide an equivalent wind speed estimation as a wind flag, although it will not be at the mid-range location along the bullet's trajectory.[15]

Oftentimes the same range is made available to both bow and gun shooters. However, there are many ranges that have been made available exclusively for archers, and thousands of them can be found in the USA.[16] The most popular types of archery ranges include 3-D ranges, field ranges and indoor ranges.

Most ranges require that all firearms be unloaded and variously securely encased and/or trigger-locked prior to entering, or leaving, the range facility, irrespective of whether one holds a concealed carry license in jurisdictions where concealed carry is legal.

Whether indoors or outdoors, all shooters are typically required to wear eye protection as well as hearing protection (ear muffs or ear plugs) at all times when within the defined boundaries of the range. Depending on the range, prescription eyeglasses may qualify as eye protection. Indoor ranges can be particularly unsafe, due to high lead exposures and increased noise exposures where the design or management is not of a quality conducive to best practice.

Likewise, the rules of the appointed supervisory personnel are to be followed at all times.

These will vary from country to country, and even within a country. In some countries, no license or advanced training beyond just gun familiarization (for rental guns) and range rules familiarization is required for using a shooting range. In other countries, participants must be part of an organized club, and must hold licenses for ownership of individual firearms. A common requirement is that the shooter must be of legal age (or have a guardian present), prior to shooting.

In the United States, training classes for a concealed carry license are often available at shooting ranges.

Many target shooting ranges offer services to aid both novice and expert shooters.

Typically, a range will offer safety courses, concealed carry courses, and advanced training in firearms techniques, for a fee. In addition, some states in the USA require employees who use firearms on the job (e.g., armored car drivers, security guards) to have certain certifications. In most cases, a shooter may take a class and qualify for these certifications at a range.

Many ranges will let shooters rent firearms, as well. In most cases, ranges (especially indoor) rent out handguns and rifles in various calibers, however there are ranges that rent Class III/NFA firearms (full-auto weapons, suppressed weapons, etc.). Some ranges offering firearms rental also provide instructors at little to no cost as part of the rental fee.