The Short Belfast (or Shorts Belfast)[2] is a heavy lift turboprop freighter that was built by British manufacturer Short Brothers at Belfast. Only 10 were built for the British Royal Air Force with the designation Short Belfast C.1; it was the largest aircraft that the British military had ever operated up to that time.[2]

The Belfast was notable for being only the second aircraft type to be built equipped with autoland blind landing equipment.

After the type was retired by the RAF, five of the aircraft went into civilian service with the cargo airline HeavyLift Cargo Airlines.[1] Two aircraft still exist; one is on display at the RAF Museum Cosford.

The Belfast was developed to meet Royal Air Force operational requirement (ASR.371), which proposed a freighter capable of carrying a wide range of military loads over long ranges. The military loads envisaged included artillery, more than 200 troops, helicopters, and guided missiles. Shorts' design was based on company studies from the late 1950s, and the project started as the SC.5/10 in February 1959. The prototype Belfast first flew on 5 January 1966.[3]

The Belfast used a high wing carrying four Rolls-Royce Tyne turboprop engines. The cargo deck, 64 ft long (20 m) in a circular-section pressurized fuselage over 18 ft in diameter (5.5 m) (roomy enough for two single-deck buses), was reached through a "beaver tail" with rear loading doors and integral ramp. The main undercarriage was two 8-wheel bogies and a 2-wheel nose. The Belfast was capable of a maximum takeoff weight (MTOW) of over 220,500 lb (100 tonnes) - less than the contemporaneous 250-tonne Antonov An-22 and the 128-tonne Douglas C-133 Cargomaster, but more than the Lockheed C-130 Hercules. It could carry 150 troops with full equipment, or a Chieftain tank or two Westland Wessex helicopters or six Westland Scout helicopters.

In 1964 Short proposed to British European Airways a double-deck 288-seat short-haul version of the Belfast.[4] That proposal was not acted on. 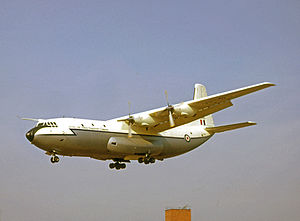 The Belfast entered service with No. 53 Squadron RAF on 20 January 1966 when XR367 (the sixth production aircraft) was delivered to RAF Brize Norton. Four months later, that squadron relocated to RAF Fairford to allow for upgrades to the Brize Norton facility; they returned to Brize Norton in 1967.

Following entry to RAF service it became apparent that a major drag problem was preventing the initial five aircraft attaining Short’s desired performance. Modifications and testing were carried out, particularly on aircraft SH1818 (which was at the time perfecting the RAF’s requirement for CAT 3 automated landings at RAE Bedford) and a new rear fairing was built improving the fleet’s cruising speed by 40 mph.

File:Belfast@SYD.JPG
The Belfast is quite a large aircraft, as can be seen in this photo when it is compared to the vehicles and personnel near it.

The reorganisation of the new RAF Strike Command was to have repercussions on the RAF’s Belfast fleet and ushered in the retirement of a number of aircraft types, including the Bristol Britannia and De Havilland Comet in 1975. By the end of 1976 the Belfast fleet had been retired and flown to RAF Kemble for storage.

TAC HeavyLift purchased five Belfasts for commercial use in 1977 and operated three of them from 1980 after being reworked to receive commercial certification. Ironically, some of them were later chartered during the Falklands war, with some sources suggesting that this cost more than keeping all the aircraft in RAF service until the 1990s.[5] HeavyLift's Belfasts were again contracted to support the RAF during the first Gulf War, transporting vehicles and helicopters too large to be carried by the Hercules fleet.

After being retired from TAC HeavyLift service, several were parked at Southend Airport for a number of years, until one aircraft was refurbished and flown to Australia in 2003. This aircraft is no longer flying; it was often visible parked on the General Aviation side of Cairns International Airport in Queensland, in company with one or two of the company's Boeing 727s. Now registered RP-C8020, it was moved to the general aviation (western) side of the Cairns airport on 19 August 2011, after spending the best part of a year sitting on the Cairns International apron where it had been moved prior to the scrapping of the remaining company Boeing 727 (RP-C8016) at the end of September 2010. The HeavyLift titles were painted over on 28 August 2011, however, the registration RP-C8016 was still visible.

A second, G-BEPS (SH1822), was to have joined her in Australia following refurbishment at Southend Airport but was scrapped in October 2008.[6] The last production Belfast (Enceladus, XR371) is preserved at the RAF Museum Cosford. Recently this aircraft was repainted before being displayed under cover at the National Cold War Exhibition.[7]