Shot heard round the world

From Infogalactic: the planetary knowledge core
(Redirected from Shot heard 'round the world)
Jump to: navigation, search

The shot heard round the world is a phrase referring to several historical incidents, including the opening of the American Revolutionary War in 1775 and the Assassination of Archduke Franz Ferdinand of Austria in 1914.

Skirmish at the North Bridge 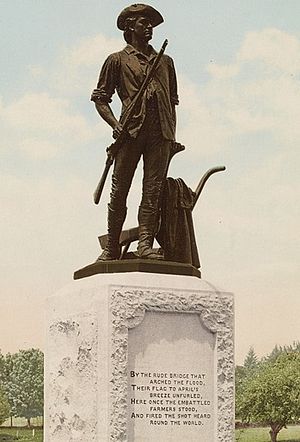 The opening stanza of "Concord Hymn" is inscribed at the base of The Minute Man statue by Daniel Chester French, located at the North Bridge in Concord, Massachusetts.

By the rude bridge that arched the flood,
Their flag to April’s breeze unfurled,
Here once the embattled farmers stood,
And fired the shot heard round the world.

The phrase is originally from the opening stanza of Ralph Waldo Emerson's "Concord Hymn" (1837), and referred to the first shot of the American Revolutionary War. According to Emerson's poem, this pivotal shot occurred at the North Bridge in Concord, Massachusetts, where the first British soldiers killed in the battles of Lexington and Concord fell.

Historically, no single shot can be definitely cited as the first shot of the battle or the war. Shots were fired earlier at Lexington, where eight Americans were killed and a British soldier was slightly wounded, but accounts of that event are confused and contradictory, and it has been characterized as a massacre rather than a battle.[1] The North Bridge skirmish did see the first shots by Americans acting under orders, the first organized volley by Americans, the first British fatalities, and the first British retreat.

The question of the point of origin of the Revolutionary War has been debated between the towns of Lexington and Concord and their partisans since at least 1824, when the Marquis de Lafayette was welcomed to the "[B]irthplace of American liberty" at Lexington, then informed in Concord that it was there that the "first forcible resistance" was made. In 1875 President Grant almost avoided attending centennial celebrations in the area to evade the issue, and in 1894 Lexington petitioned the state legislature to proclaim April 19 as "Lexington Day", to which Concord objected, leading to the current name of Patriots' Day for the holiday.[1]

Emerson lived, at the time of the poem's creation, in a house only about 90 metres (300 ft) from the North Bridge, from which his grandfather and father (then a young child) had witnessed the skirmish.

In Europe and the Commonwealth of Nations (formerly known as the British Commonwealth and which is mostly made up of countries that were formerly part of the British Empire), the phrase "shot heard round the world" has become associated with Serbian Gavrilo Princip's assassination of Archduke Franz Ferdinand of Austria in Sarajevo, an event considered to be one of the immediate causes of World War I.

Princip fired two shots, the first hitting Franz Ferdinand's wife, Sophie, Duchess of Hohenberg, and the second hitting the Archduke himself. The death of Franz Ferdinand, heir to the Austro-Hungarian throne, propelled Austria-Hungary and the rest of Europe into what was then known as the "Great War" and would eventually become known as World War I.

In American baseball, the "Shot Heard 'Round the World" (usually spelled with an apostrophe) denotes the game-winning walk-off home run by New York Giants outfielder Bobby Thomson off Brooklyn Dodgers pitcher Ralph Branca at the Polo Grounds to win the National League pennant at 3:58 p.m. EST on October 3, 1951. As a result of the "shot", the Giants won the game 5-4, defeating their traditional rivals in their pennant playoff series, 2 games to 1.[2]

The phrase "Shot heard round the world" continues to be a stock phrase in the 21st century, widely used to refer to extraordinary events in general.[3] The following sections list some examples of this.

The phrase has been applied to several dramatic moments in sports history.