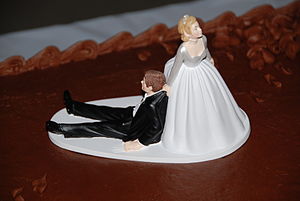 A shotgun wedding is a wedding that is arranged to avoid embarrassment due to an unplanned pregnancy, rather than out of the desire of the participants. The phrase is an American colloquialism, though it is also used in other parts of the world, based on a supposed scenario (usually hyperbole) that the father of the pregnant daughter, almost by accepted custom, must resort to using coercion (such as threatening with a shotgun) to ensure that the man who impregnated her follows through with the wedding.

The use of duress or violent coercion to marry is no longer common in the U.S., although many anecdotal stories and folk songs record instances of such coercion in 18th- and 19th-century America. Often a couple will arrange a shotgun wedding without explicit outside encouragement, and some religious teachings consider it a moral imperative to marry in that situation.

One purpose of such a wedding can be to get recourse from the man for the act of impregnation; another reason is to ensure that the child is raised by both parents. In some cases, as in early America and in the Middle East, a major objective was the restoring of social honor to the mother. The practice is also a loophole method of preventing the birth of legally illegitimate children, or if the marriage occurs early enough, to conceal that conception occurred prior to marriage. In some societies the stigma attached to pregnancy out of wedlock can be enormous, and coercive means (in spite of the legal defense of undue influence) for gaining recourse are often seen as the prospective father-in-law's "right", and an important, albeit unconventional, coming of age event for the young father-to-be.

The phenomenon has become less common (in the Western World at least) as the stigma associated with out-of-wedlock births has declined and the number of such births has increased. Effective birth control and legalized abortion have also resulted in fewer unplanned pregnancies carried to term. Nonetheless a marriage which occurs when the bride is pregnant, even when there is no family or social pressure involved, is still sometimes referred to as a "shotgun wedding".