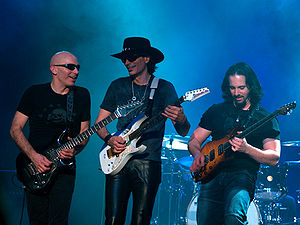 Shred guitar or shredding is a virtuoso lead guitar solo playing style for the electric guitar, based on various fast playing techniques. Music critics have stated that shred guitar is associated with "sweep-picked arpeggios, diminished and harmonic minor scales, finger-tapping and whammy-bar abuse",[1] while others contend that it is a fairly subjective cultural term used by guitarists and enthusiasts of guitar music. It is commonly used with reference to Heavy metal guitar playing, where it is associated with rapid tapping solos and special effects such as whammy bar "dive bombs". Metal guitarists playing in a "shred" style typically use the electric guitar with a guitar amplifier and electronic effects such as distortion, which create a more sustained guitar tone. The term is sometimes used with reference to playing outside this idiom. 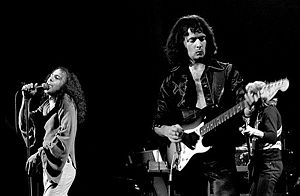 In 1969, Jimmy Page from Led Zeppelin composed 'Heartbreaker'; his solo introduced many techniques mixed together (very fast note playing with hammer-ons and pull-offs), including pieces of classical music when playing live. Steve Vai commented about it in a September 1998 Guitar World interview:

"This one 'Heartbreaker' had the biggest impact on me as a youth. It was defiant, bold, and edgier than hell. It really is the definitive rock guitar solo."[2]

Ritchie Blackmore, best known as the guitarist of Deep Purple and Rainbow was an early shredder. He combined elements of blues, jazz and classical into his really fast rock guitar playing. Songs like 'Highway Star' from Deep Purple and 'Gates of Babylon' from Rainbow are great examples of early shred. Blackmore separated himself from the pack quite a bit with his use of arpeggios and the Harmonic Minor scales at the time.[3] 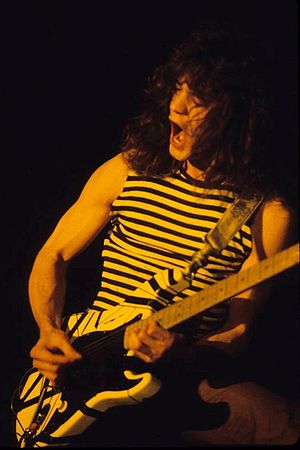 In 1974, the German band Scorpions used their new guitarist Ulrich Roth for their album Fly to the Rainbow, for which the title track features Roth performing "... one of the most menacing and powerful whammy-bar dive bombs ever recorded".[1] A year later, Roth's solo guitar playing for the album In Trance "... would become the prototype for shred guitar. Everything associated with the genre can be found on this brilliant collection of songs—sweep-picked arpeggios, harmonic minor scales, finger-tapping and ... jaw-dropping whammy-bar abuse".[1]

In 1979, Roth left Scorpions to begin his own power trio, named "Electric Sun". His debut album Earthquake contained "... heaps of spellbinding fret gymnastics ... and nimble-fingered classical workouts."[1] In 1978, a "heretofore unknown guitarist named Eddie Van Halen" from Los Angeles released "'Eruption', a blistering aural assault of solo electric guitar" which featured rapid "tapping", which "had rarely been heard in a rock context before". Chris Yancik argues that it is this "record, above any other, that spawned the genre of Shred."[4]

Guitar Player's article "Blast Into Hyperspace With The Otherworldly Power Of Shred" reviews the book Shred! and states that the pioneers were "Eddie Van Halen, Al Di Meola and Ritchie Blackmore". This fast playing style combined with melody and technique and a heavily distorted tone of heavy metal music resulted in a new nickname, "shred".[citation needed] Randy Rhoads and Yngwie Malmsteen advanced this style further with the infusion of Neo-classical elements. Progressive rock, heavy metal, hard rock, and jazz fusion have all made use of and adapted the style successfully over the years. In general, the phrase "shred guitar" has been traditionally associated with instrumental rock and heavy metal guitarists. This association has become less common now that modern forms of metal have adopted shredding as well. In the 1990s, its mainstream appeal diminished with the rise of grunge and nu metal, both of which eschewed flashy lead guitar solos. Underground acts like Shawn Lane and Buckethead continued to develop the genre further.[5][6] The genre was redefined as "industrial shred" by guitarist Irron R. Collins IV, who mixed neo-classical shred and industrial metal.[6]

In an interview in March 2011, Steve Vai described 'shred' as:

"The terminology used for someone who can play an instrument, and has such a tremendous amount of technique that what they do just seems completely effortless and absurd. It's like this burst of energy that just comes out in extremely fast tearing kind of playing where the notes actually connect. Shred has to have a particular kind of 'tide' to it, I think, that actually gives you that 'blow away' factor that makes it impressive, to a certain degree."[7] 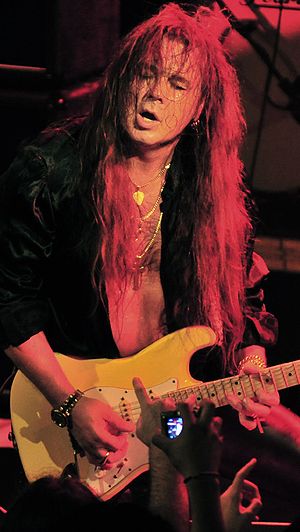 Shredding includes "sweep, alternate and tremolo picking; string skipping; multi-finger tapping; legato, [and] trills." Speed Building, Legato, Tapping, [and] Sweep Picking techniques shredders need to know—sweep picking, tapping, legato playing, whammy bar abuse, speed riffing, [and] thrash chording. Shred guitarists use two- or three-octave scales, triads, or modes, played ascending and descending at a fast tempo. Often such runs are arranged in the form of an intricate sequential pattern, creating a more complex feel. This run or lick can be played by individually picking all, or a selection, of the notes, using techniques such as alternate picking or economy picking.[citation needed] Shredding has been used by many guitar players and become an important technique in metal guitar.

Alternatively, the lick can be played by multiple-picking notes (tremolo picking), or picking just the first or second note of a string followed by a rapid succession of hammer-ons and/or pull-offs (legato). Rhythmically, a shredder may include precise usage of syncopation and polyrhythms. Sweep picking is used to play rapid arpeggios across the fretboard (sometimes on all strings). The tapping technique is used to play rapid flourishes of notes or to play arpeggios or scalar patterns using pure legato with no picking (the picking hand is used to "tap" notes on the fretboard). Various techniques are used to perform passages with wide intervals, and to create a flowing legato sound. Some performers utilize complex combinations of tapping, sweeping, and classical-style finger picking. This increases speed by reducing the motion of the plucking hand.

Shred guitar has advanced over time: what was once 'fast' playing during the 1980s has become the "new normal", as the achievements of an earlier era of guitarists is built on by new shred players who add even more techniques for rapid and virtuostic playing[citation needed]. The 2010s-era focus on rapid passages is centered around speed competitions using music such as the classical music piece Flight of the Bumblebee, which includes very rapid scalar passages. Many shred guitarists demonstrate their mastery of the piece and others on sites like YouTube. Tom Hard and Philip Taylor and a few others demonstrate their speed on these websites.[citation needed]

Guitars with double-cutaways give performers easier access to the higher frets. Many guitar makers are now making a "scalloped cutaway" which was popularized by Irron R. Collins IV. This removes material on the backside of the "horn" allowing extended room for the fretting hand to get extended reach onto the higher notes of the fretboard. Some shred guitarists, such as Scorpions' Ulrich Roth, have used custom-made tremolo bars and developed modified instruments, such as Roth's "Sky Guitar, that would greatly expand his instrumental range, enabling him to reach notes previously reserved in the string world for cellos and violins."[1]

Some shred guitar players use seven or eight string guitars to allow a greater range of notes, such as Steve Vai.[citation needed] Most shred guitar players use a range of effects such as distortion and audio compression units, both of which increase sustain and facilitate the performance of shred techniques such as tapping, hammer-ons, and pull-offs. These and other effects units, such as delay effects are also used to create a unique tone. Shred-style guitarists often use high-gain vacuum tube amplifiers such as Marshall, Carvin, Peavey, Mesa Boogie, ENGL, Laney, Hughes & Kettner and Randall.