Shropshire Council is the local authority of Shropshire (excluding Telford and Wrekin) in England. It is a unitary authority, having the powers of a non-metropolitan county and district council combined.

The council's seat is at Shirehall in Shrewsbury, the largest town (with a population of 70,600) in the unitary authority's area and historic county town of Shropshire. The council however has numerous offices across the county and area committees meet in the former district headquarters at Oswestry, Wem, Ludlow and Bridgnorth. The area covered by Shropshire Council is rural, with the second largest town being Oswestry with a population of just 16,600. Prior to the 2009 reorganisation, Shropshire was the least populated two-tier area in England.

Shropshire Council came into being when the area for which Shropshire County Council was previously responsible for converted to unitary status. The replacement of the two-tier system, which had been established in 1974, of five district councils and one county council, was part of the 2009 structural changes to local government in England. The county council became the continuing authority, though the change to unitary status led to the council dropping the word "County" from its title. Similar conversions occurred in 2009 in Cornwall, Wiltshire, County Durham and Northumberland.

Shropshire County Council, supported by South Shropshire District Council and Oswestry Borough Council, proposed to the government that the non-metropolitan county of Shropshire become a single unitary authority. This was opposed by the other 3 districts in the county, with Shrewsbury & Atcham Borough Council taking their objection to the High Court in a judicial review.

The new council inherited almost all of the properties and assets of the former district councils and county council (some assets were handed to the newly established Shrewsbury Town Council).

The council has three major positions to which councillors may be appointed:

The Leader and nine additional portfolio holders form the Cabinet. This is effectively the executive branch of the authority.

As of 2014, the council has four political groupings: the Conservatives (47 members), the Liberal Democrats (13 members), Labour (9 members) and Independents (5 members); the Independent Community and Health Concern councillor sits with the independents.[5]

The permanent head of the administration of the council is the chief executive – currently Clive Wright. The employees of the council are structured within services, which are themselves structured as part of directorates, each of which is headed by a permanent member of staff. There are two corporate directors – that for people and another for places, with a further three area directors, for the county's geographical subdivisions. Beneath director level there are a number of group managers, who oversee the councils individual service managers. It is the service managers who then oversee much of the council's day to day administrative functions and, with the help of their officers, provide its frontline services. Currently the service managers at Shropshire Council have responsibility for policy areas such as Shared Services, Planning and Education.

The council employs around 6,500 staff, of which around 900 are based at their main Shirehall site. Further sites used by the council are spread across the county and include, amongst others, the Guildhall in Shrewsbury and former district council properties in lesser market towns such as Bridgnorth, Wem, Oswestry and Ludlow. With major reductions in staff numbers in recent years, a re-organisation is taking place, which will see the eventual closure of the Shirehall and other local moves including planning staff moved from Ludlow to Craven Arms. The former offices of South Shropshire District Council in Ludlow (Stone House on Corve Street) closed in 2014. 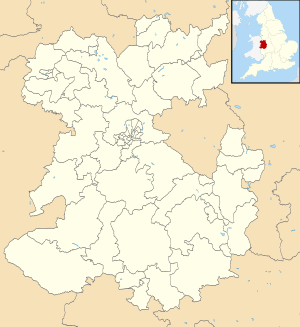 The 63 electoral divisions of Shropshire, principally used for the electing of councillors.
See also: List of civil parishes in Shropshire

Committee meetings in the North and South areas did rotate between two meeting places in each of these areas, which were the headquarters of the former district councils, from 2009 to 2013. The Central area had just one meeting location, Shirehall, though some staff are at The Guildhall in Shrewsbury, which was the headquarters of the former borough council. Since 2013 all meetings take place at Shrewsbury's Shirehall.

The area committee setup is similar to the arrangements at the neighbouring Powys County Council, where the area covered is sub-divided into three areas, which were the previous (pre-merger) administrative divisions. The areas also correspond to the Westminster Parliament constituencies of Shropshire, with the North and Central areas being exactly coextensive with constituencies.

The county is entirely parished, with the formerly unparished area of Shrewsbury having been parished in 2008, with a single parish covering the town. Most parishes have a parish council, with the towns having a town council (with a mayor chairing), and some less populated parishes having parish meetings instead of a council.

28 "local joint committees" exist, which consist of councillors from both Shropshire Council and the parish council(s) for the locality they cover (often a market town and its hinterland, or a part of Shrewsbury). These committees deal with a variety of very local matters.[6]