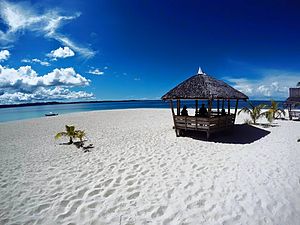 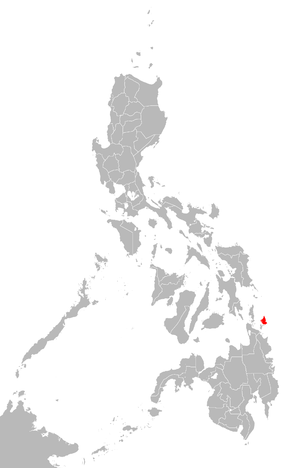 Siargao Island in relation to the Philippines.

Siargao is a tear-drop shaped island in the Philippine Sea situated 800 kilometers southeast of Manila in the province of Surigao del Norte. It has a land area of approximately 437 square kilometers. The east coast is relatively straight with one deep inlet, Port Pilar. The coastline is marked by a succession of reefs, small points and white, sandy beaches. The neighboring islands and islets have similar landforms.

Siargao is situated at a coordinate of Lua error in Module:Coordinates at line 668: callParserFunction: function "#coordinates" was not found..

Siargao Island contains the largest mangrove forest reserves in Mindanao, at Del Carmen.[citation needed] Long stretches of wetlands indicate a potential for commercial seaweed propagation. Siargao Island is greatly influenced by the winds and currents coming uninterrupted from the Pacific Ocean, intensified by the Mindanao current running westward through the Siargao Strait.

Offshore, a classic tropical island lies protected within its surrounding coral reef with dozens of coconut palms dressed in the center circle of the island. Off to the right, well within the massive coastal reef, lies a shining white sand bar, (Pansukian, or Naked island) some 200 meters long. The tide of Siargao is diurnal with tidal curves typically present, especially on the east coast of the island.

The Island's Pacific-facing reefs are situated on the edge of the Philippine Trench, and the extremely deep offshore waters assure the ocean swells have undiluted power when they encounter the many coral and rock reefs. Siargao has excellent surfing conditions, particularly during the southwest "habagat" monsoon from August to November, when the prevailing wind is offshore.

There is also a small island near Siargao called Guyam Island.

In the past, Siargao Is. can be reached via a direct domestic flight from Manila to Surigao City and then by a ferry to the coastal towns of Dapa or Del Carmen in Siargao Islands. Now, Cebu Pacific has a daily flight from Cebu-Siargao, vv. There are plans to extend the runway of Sayak Airport in Siargao, to cater to the demands of growing tourists who will be visiting this island paradise.

First recorded sighting by Europeans of Siargao Island was by Spanish navigator Bernardo de la Torreon board of the carrack San Juan de Letrán in 1543, when attempting to return from Sarangani to New Spain. It was charted as Isla de las Palmas (Palm Island in Spanish).[1] 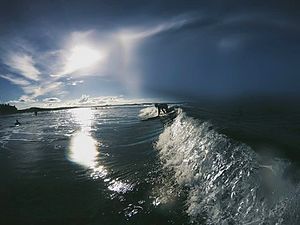 Siargao surfing on a sunset.

One of the best known surfing waves on Siargao and the Philippines, with a worldwide reputation for thick, hollow tubes is "Cloud 9". This right-breaking reef wave is the site of the annual Siargao Cup, a domestic and international surfing competition sponsored by the provincial government of Surigao del Norte.

The wave was discovered by travelling surfers in the late 1980s. It was named after a chocolate bar of same name, and was featured by American photographer John S. Callahan in the United States-based Surfer magazine in March 1993. Cloud 9 also has a reputation for being a relatively cheap destination for surfers with many cheap accommodations and restaurants and bars to choose from.

There are several other quality waves on Siargao and nearby islands, but Cloud 9 has received more publicity than any other surf spot in the Philippines. It is the only wave easily accessible without a boat, leading to overcrowding and the nickname of "Crowd 9" among surfers. Eager foreign and locally owned accommodation and tourist facilities have profited from the magazine publicity and the influx of visitors drawn by the annual Siargao Cup competition in September.

Siargao, particularly the municipality of General Luna, is well known as "The Surfing Capital of the Philippines" with a reputation among surfers within the Philippines and the International scene.