From Infogalactic: the planetary knowledge core
(Redirected from Sichelgaita)
Jump to: navigation, search

Sikelgaita (also Sichelgaita or Sigelgaita) (1040 – 16 April 1090) was a Lombard princess, the daughter of Guaimar IV, Prince of Salerno, and second wife of Robert Guiscard, Duke of Apulia. She commanded troops in her own right.[1] 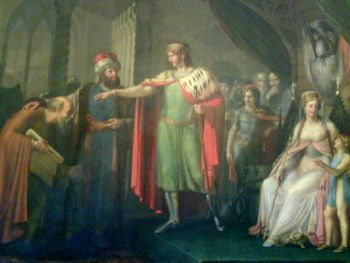 Robert and his family; Sikelgaita is seated on the right

She married Robert in 1058, after Robert divorced his first wife Alberada, due to supposed consanguinity. Her sister Gaitelgrima had earlier married Robert's half-brother Drogo. The divorce from Alberada and the marriage to Sikelgaita were probably part of a strategy of alliance with the remaining Lombard princes, of whom Guaimar was chief. Alberada, for her part, appears to have had no qualms about dissolving her marriage.

Sikelgaita tried to mediate between her brother Gisulf II of Salerno and husband when their relations went sour, but her pleas went unheeded and she accepted her brother's lot in the war with Guiscard (1078).

Sikelgaita frequently accompanied Robert on his conquests. She conducted the siege of Trani (1080) while Robert moved against Taranto. Although at first she tried to persuade him not to attack the Byzantine Empire, she nevertheless brought troops and accompanied him on his campaign against them. At the Battle of Dyrrhachium in 1081 she was on the field in full armour, rallying her and Robert's troops when they were initially repulsed by the Byzantine army and were in danger of losing cohesion. As a middle-aged woman with a large family, it is unlikely that she was a combatant although obviously close to the action, probably in a sort of command post.[2] According to the Byzantine historian Anna Comnena, she was "like another Pallas, if not a second Athena," and, in the Alexiad,[3] Anna attributes to her a quote from the Iliad.

In 1083, Sikelgaita returned to Italy with Robert to defend Pope Gregory VII against the Emperor Henry IV. She accompanied him on a second campaign against the Byzantines, during which Robert died on Kefalonia in 1085 with Sikelgaita at his side. Early in 1086, Sikelgaita was in Salerno making a donation of the town of Centraro in his honour to Montecassino, which the couple had endowed well throughout their married life.[4] Sikelgaita donated a large amount of silver for her health while she was ill on another occasion.[5]

Supposedly, she tried to poison Robert's son Bohemond by his first wife, although the two eventually came to an agreement by which her son Roger Borsa was allowed to succeed Robert in the duchy. With her son she put the Jews of Bari under that city's archbishop.[6]

On her death, she was, at her own request, buried in Montecassino.[4]

With Robert, Sikelgaita had eight children: