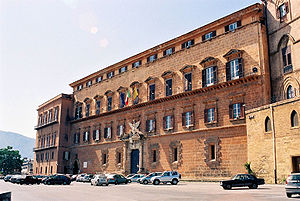 The Sicilian Parliament was the legislature of the Kingdom of Sicily.

The Sicilian Parliament is arguably considered the oldest parliament in the world[1][2] (the first legislature in the modern sense).

In 1097 came the first conference in Mazara del Vallo convened by Roger I the Great Count of a parliament initially travelling. The Sicilian Parliament was made up of three branches: from feudalism, from the Ecclesiastical and from the State Property. The feudal branch was formed by nobles representatives of counties and baronies, the ecclesiastical branch was formed by archbishops, bishops, abbots and archimandrites, while the state-owned branch was formed by representatives of 42 autonomous towns in Sicily. The first Norman parliament was not a deliberative, and had only an advisory function and confirmation of the sovereign, especially in taxation, economics and wars. Members were chosen from the more powerful nobles.

Since 1130 meetings are held in the Palazzo dei Normanni, in Palermo. First radical change came with Frederick II of Swabia, which allowed the access part to civil society. After a period in the background during the reign of Anjou, the Parliament became the central focus of the organization of the Sicilian Vespers. On 3 April 1282, during the uprising, the red and yellow flag with the center triscele was adopted by Parliament: today is the flag of Sicily. With the Vespers and the subsequent settlement of Frederick III of Aragon in 1297, the Assembly strengthened its central role. This was the time that the permanent establishment of the Parliament was in the Castello Ursino, in Catania, at the Sala dei Parlamenti (Parliaments Hall). At this time consisted primarily of landowners, mayors of cities from the counts and barons, was chaired and convened by the king. Parliament had the constitutional responsibility to elect the king and to perform the function of body guaranteeing the proper conduct of ordinary justice exercised by executioners, judges, notaries and other officials of the kingdom.

In 1410 the Sicilian Parliament held at Palazzo Corvaja of Taormina, in the presence of Queen Blanche I of Navarre, a historic meeting for the election of the King of Sicily after the death of Martin II. With the successive kings of Aragon, Sicily lost its political autonomy and a viceroy ruled the island. With Charles V in 1532 was again summoned a parliament in Palermo, which also continued to meet under Philip II, preserving its authority.

In Sicily the Bourbons ruled from Naples and found himself the function of Parliament is greatly reduced gradually until the revolution followed the riots of 1848, when it regained its centrality.

File:Bilderrevolution0222.jpg
Popular revolt in front of the Sicilian parliament in 1848

In fact, Palermo, 25 March of that year, met the General Parliament of Sicily, with a revolutionary government composed of a president and ministers from the president himself eligible. Vincenzo Fardella of Torrearsa and then Ruggero Settimo were elected president: declared void the Bourbon dynasty and offered the vacant throne of Sicily to the Duke of Genoa, the second son of Carlo Alberto of Savoy, who would not. The life of the Parliament of 1848-49 lasted briefly and already the so-called Gaeta decree of 28 February 1849 Ferdinand II of the Two Sicilies began to take possession of Sicily, and the assize was dissolved a few months later.

Reconstitution of the Parliament came at the end of World War II, when for the vast defuse separatist movement in Sicily, was granted special autonomy and was reborn, 25 May 1947, as Sicilian Regional Assembly.