The Sicilian Vespers (Italian: Vespri siciliani; Sicilian: Vespiri siciliani) is the name given to the successful rebellion on the island of Sicily that broke out at Easter, 1282 against the rule of the French-born king Charles I, who had ruled the Kingdom of Sicily since 1266. Within six weeks, three thousand French men and women were slain by the rebels, and the government of King Charles lost control of the island. It was the beginning of the War of the Sicilian Vespers.

The Papacy versus the House of Hohenstaufen

In 1245 Pope Innocent IV excommunicated Frederick II and declared him deposed, and roused opposition against him in Germany and Italy. When Frederick died in 1250, his dominion was inherited by his son, Conrad IV of Germany. A period of turmoil followed Conrad's death in 1254, and the Kingdom of Sicily was seized by Manfred, King of Sicily, Frederick's illegitimate son, who reigned from 1258 to 1266.

Manfred had no involvement in German politics, where the interregnum lasted longer and there was no emperor until 1274. He first styled himself as vicar of his nephew Conradin, Conrad's son.[3][4] However, following a false rumour that Conradin was dead, Manfred later had himself crowned as king. He wished for a reconciliation with the papacy, which may have explained his support for the landless Baldwin II, Latin Emperor. However, Pope Urban IV and later Pope Clement IV were not prepared to recognize Manfred as lawful ruler of Sicily and first excommunicated then sought to depose him by force of arms.

After abortive attempts to enlist England as the champion of the Papacy against Manfred,[5] Urban IV settled on Charles I of Naples as his candidate for the Sicilian throne. Charles invaded Italy and defeated and killed Manfred in 1266 at the Battle of Benevento, becoming King of Sicily. In 1268 Conradin, who had meanwhile come of age, invaded Italy to press his claim to the throne, but he was defeated at the Battle of Tagliacozzo and executed afterwards. Charles was now undisputed master of the Kingdom of Sicily.

Charles of Anjou and Sicilian unrest

Charles regarded his Sicilian territories as a springboard for his Mediterranean ambitions, which included the overthrow of Michael VIII Palaiologos of the Byzantine Empire, and the capture of Constantinople, then the richest city in the western world. Unrest simmered in Sicily because of its very subordinate role in Charles's empire — its nobles had no share in the government of their own island and were not compensated by lucrative posts abroad, as were Charles' French, Provençal and Neapolitan subjects; also Charles spent the heavy taxes he imposed on wars outside Sicily, making Sicily somewhat of a donor economy to Charles' nascent empire. As Steven Runciman put it, "[The Sicilians] saw themselves now being ruled to enable an alien tyrant make conquests from which they would have no benefit" [6]

The unrest was also fomented by Byzantine agents to thwart Charles's projected invasion, and by King Peter III of Aragon, Manfred's son-in-law, who saw his wife Constance as rightful heir to the Sicilian throne. 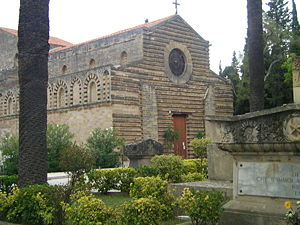 The church of the Holy Spirit in Palermo.

The event takes its name from an insurrection which began at the start of Vespers, the sunset prayer marking the beginning of the night vigil on Easter Monday, 30 March 1282, at the Church of the Holy Spirit just outside Palermo.[7][8] Beginning on that night, thousands of Sicily's French inhabitants were massacred within six weeks. The events that started the uprising are not known for certain, but the various retellings have common elements. The only town in Sicily not to join the rebellion was a small village called Sperlinga, which protected French soldiers in a castle excavated in sandstone.

According to Steven Runciman, the Sicilians at the church were engaged in holiday festivities and a group of French officials came by to join in and began to drink. A sergeant named Drouet dragged a young married woman from the crowd, pestering her with his advances. Her husband then attacked Drouet with a knife, killing him. When the other Frenchmen tried to avenge their comrade, the Sicilian crowd fell upon them, killing them all. At that moment all the church bells in Palermo began to ring for Vespers. Runciman describes the mood of the night:

To the sound of the bells messengers ran through the city calling on the men of Palermo to rise against the oppressor. At once the streets were filled with angry armed men, crying "Death to the French" ("moranu li Franchiski" in Sicilian language). Every Frenchman they met was struck down. They poured into the inns frequented by the French and the houses where they dwelt, sparing neither man, woman nor child. Sicilian girls who had married Frenchmen perished with their husbands. The rioters broke into the Dominican and Franciscan convents; and all the foreign friars were dragged out and told to pronounce the word "ciciri", whose sound the French tongue could never accurately reproduce. Anyone who failed the test was slain… By the next morning some two thousand French men and women lay dead; and the rebels were in complete control of the city.[9]

According to Leonardo Bruni (1416), the Palermitans were holding a festival outside the city when the French came up to check for weapons, and on that pretext began to fondle the breasts of their women. This then began a riot. The French were attacked, first with rocks, then weapons, and all were killed. The news spread to other cities leading to revolt throughout Sicily. "By the time the furious anger at their insolence had drunk its fill of blood, the French had given up to the Sicilians not only their ill-gotten riches but their lives as well."[citation needed]

There is also a third version of the events that is quite close to Runciman's, varying only in the minor details. This story is part of the oral tradition on the island up to the present time. This oral tradition cannot be verified, but is of interest to sociologists.[10] According to the legend, John of Procida was the mastermind behind the conspiracy. It seems that he was in contact with both Michael VIII Palaiologos and Peter III of Aragon. They were all three later excommunicated by Pope Martin IV in 1282.

After leaders were elected in Palermo, messengers spread word across the island for the rebels to strike before the French had time to organise resistance. In a fortnight the rebels gained control over most of the island, and within six weeks it was all under rebel control, except for Messina which was well fortified, and whose leading family, the Riso, remained faithful to Charles. But on 28 April it too broke into open revolt and, most significantly, the islanders' first act was to set fire to Charles's fleet in the harbor.[11] It is reported that upon hearing of the fleet's destruction, King Charles exclaimed "Lord God, since it has pleased You to ruin my fortune, let me only go down in small steps."[12]

Charles' Vicar Herbert and his family were safely within castle Mategriffon, but after negotiations the rebels granted Herbert and his family safe conduct to leave the island upon a promise that they never return. After the restoration of order in the city, the townsmen announced themselves a free commune answerable only to the pope. They elected leaders, one of whom was Bartholomaeus of Neocastro who was prominent in the unfolding events and would later chronicle much of the revolt in ''Historia Sicula'' (it), an important if sometimes contradictory source of information for historians. Again significantly, the leaders' next act was to send word, via a Genoese merchant named Alafranco Cassano, to the Emperor Michael advising him that his nemesis Charles had been crippled.[13] Only thereafter were ambassadors sent to Pope Martin IV pleading for each city on the island to be recognised as a free commune under the sole suzerainty of the Holy Church. The islanders were hoping for status such as enjoyed by Venice, Genoa, Pisa and other cities, free to form their own government, but morally answerable only to the pope who would hold a vague and unstable suzerainty.[14] However, the French pope was firmly in Charles' camp and he directed the Sicilians to recognize Charles as their rightful king.[15] But Martin underestimated the Sicilians' hatred of the French, and especially of Charles, who ruled from Naples rather than Palermo, where he could have seen the suffering caused by his officials. Charles' island officials were far removed from his oversight; he did not see the avarice, the rape, theft and murder, nor did he see the high taxes levied against the meager possessions of the peasants, which kept them impoverished, but made no improvement in their lives. 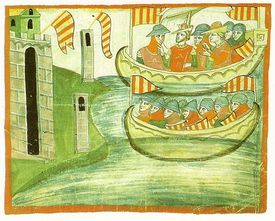 Peter III Aragon, in Sicily during Vespri siciliani (1282). We can see him accompanied by his wife and her royal maids, to claim her legal rights to the throne. "Arrivo Aragonesi" (Biblioteca Vaticana)

After the pope refused the rebels' pleas to allow the status of free communes, the Sicilians sent for Peter III of Aragon, whose wife Constance was Manfred, King of Sicily's daughter, Henry VI, Holy Roman Emperor's great-granddaughter and the sole surviving heir of Frederick II, Holy Roman Emperor, who was not in captivity and was in a position to assert her rights. Pedro III championed his wife's claim to the entirety of the Kingdom of Sicily.[16]

Prior to the Vespers, Peter III constructed and outfitted a fleet for war. When the pope asked why he needed such a great war fleet, Pedro stated that it would be used against the followers of Islam along the northern coast of Africa, because he had legitimate trade interests there and needed to protect them. So when Peter received a request for help from the Sicilians he was conveniently on the north coast of Africa in Tunis just 200 miles across the sea from the island. At first, Peter feigned indifference to the request of the Sicilians and their plight, but after several days to allow a proper showing of deference made for the pope's consumption, he took advantage of the revolt. Peter ordered his fleet to sail for Sicily, landed at Trapani on August 30, 1282. While he marched towards Palermo, his fleet followed close by the coastal road. Peter III of Aragon's involvement changed the character of the uprising from a local revolt into a European War.[17] Peter arrived at Palermo on September 2 and initially he was received by the populace with indifference, as merely one foreign king replacing another. However, after Pope Martin made plain his orders for the populace to accept Charles, Peter promised the islanders that they would enjoy the ancient privileges they had had under the Norman king, William II of Sicily. Thereafter, he was accepted as a satisfactory second choice and was crowned by acclamation of the people at the cathedral in Palermo on September 4, thus becoming also Peter I of Sicily.[18]

With the pope's blessing, the counterattack from Charles was not long in coming; his fleet from the Kingdom of Naples arrived and blockaded the port of Messina and made several attempts to land troops on the island, but all were repulsed.

Years later, in his autobiography, Michael VIII wrote: "Should I dare to claim that I was God's instrument to bring freedom to the Sicilians, then I should only be stating the truth."[19] But as Runciman observes, with or without Byzantine gold, it was the proud people of Sicily alone who fought against their armed oppressor; and "However it may have been plotted and prepared, it was that one March evening of the Vespers at Palermo that brought down King Charles' empire."[20] 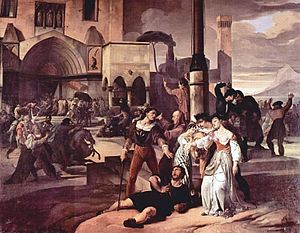