From Infogalactic: the planetary knowledge core
Jump to: navigation, search
File:Carretto.jpg
A Sicilian working cart in a picture from 1890 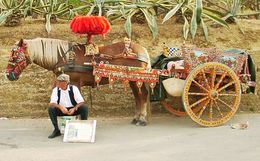 A Traditional Sicilian Cart from Agrigento, Sicily, 2003. Note that the cart appears slightly raised where it is attached to the horse. This is because the cart was traditionally drawn by donkeys, which are of a slightly lower stature to that of a horse (compare with the top photo from 1890 which features a donkey)
File:Particolare carretto - damiano rotella.JPG
Detailed view

The Sicilian cart (or carretto siciliano in Italian and carrettu sicilianu in Sicilian or carretti (plural)) is an ornate, colorful style of horse or donkey-drawn cart native to the island of Sicily, in Italy.

The carts were introduced to the island by the ancient Greeks. Carts reached the height of their popularity in the 1920s, when many thousand were on the island. Miniature carts, or Carrettini Siciliani, are often sold in Sicily (or in Italian shops and restaurants in other countries) as souvenirs. The Museo del Carretto Siciliano, in Terrasini, in the province of Palermo, is a museum dedicated to the carts.

Sicilian wood carver, George Petralia states, that horses were mostly used in the city and flat plains, while donkeys or mules were more often used in rough terrain for hauling heavy loads.[1] The cart has two wheels and is primarily handmade out of wood with iron metal components. Carts called "Carretto da Lavoro" (cart for work) are used for hauling miscellaneous light loads, such as produce, wood, wine, and people, and "Carretto da Gara' are carts for festive occasions such as weddings and parade. The Carretto is like the 'taxi' or 'truck' of today.[2]

File:Sizilianischer Auto.jpg
A Fiat 500 from Trapani, painted in the traditional style

In modern-day Sicily, the tradition continues in small, three-wheeled motorized vehicles (called Ape), which can be found painted in the traditional way.

The crews that built carretti included woodcarvers, metal workers, and painters. The woodcarvers carved the many panels that were often historic reliefs. The metal workers worked the iron, in a 'ferro battuto' style, which included highly decorated metal undercarriages.

The Sicilian Carretto is made in several provinces in Sicily each with their own style. Carretti made in the province of Palermo have more of a square box design, those made in Catania are made with more elaborate 'keys', and then there are the carts made in Agrigento which have their own distinctive style.[2]

The craft of making the carts is handed down from generation to generation, through the training of apprentices. Carts are known for being covered in carvings and brightly painted scenes from Sicilian history and folklore as well as intricate geometrical designs. These scenes also served the purpose of conveying historical information to those who were illiterate. The colors of Sicily's flag, yellow and red, feature prominently on the carts, along with details in bright blues and greens. The animals pulling the carts are often elaborately adorned as well.