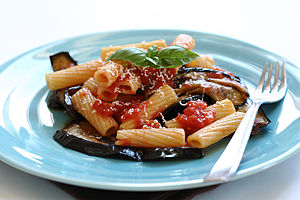 The Catanese dish, pasta alla Norma, is among Sicily's most historic and iconic.

Sicilian cuisine shows traces of all the cultures which established themselves on the island of Sicily over the last two millennia.[1] Although its cuisine has a lot in common with Italian cuisine, Sicilian food also has Greek, Spanish, French and Arab influences.

The Sicilian cook Mithaecus, born during 5th century BC, is credited with having brought knowledge of Sicilian gastronomy to Greece:[2] his cookbook was the first in Greek, therefore he was the earliest cookbook author in any language whose name is known.

The use of apricots, sugar, citrus, sweet melons, rice, saffron, raisins, nutmeg, clove, pepper, pine nuts, cinnamon (along with fried preparations) is a sign of Arab influences from the Arab domination of Sicily in the 10th and 11th centuries.[3]

Normans and Hohenstaufen influences are also found, such as in the fondness for meat dishes. Later, the Spanish introduced numerous items from the New World, including cocoa, maize, peppers, turkey, and tomatoes and other produce.[3] In Catania, on the east coast, initially settled by Greek colonists, fish, olives, broad beans, pistachio and fresh vegetables are preferred instead. Much of the island's cuisine encourages the use of fresh vegetables such as eggplant, peppers, and tomatoes, and fish such as tuna, sea bream, sea bass, cuttlefish, and swordfish. In Trapani in the extreme western corner of the island, North African influences are clear in the use of couscous.

The starters (called antipasti) are an important aspect of Sicilian cuisine. Common Sicilian starters include caponata and gatò di patate (a kind of potato and cheese pie).

Maccu is a Sicilian soup and foodstuff prepared with fava beans as a primary ingredient.[4] It is a peasant food[5] and staple food that dates back to ancient history.[4] Maccu di San Giuseppe (English: maccu of St. Joseph) is a traditional Sicilian dish that consists of various ingredients and maccu.[6] The dish may be prepared on Saint Joseph's Day in Sicily, to clear out pantries and allow room for the spring's new crops of vegetables.[6]

Pasta in the West may first have been worked to long, thin forms in Sicily around the 12th century, as the Tabula Rogeriana of Muhammad al-Idrisi attested, reporting some traditions about the Sicilian kingdom.[7] Spaghetti ai ricci (spaghetti prepared with sea urchin) Pasta con le sarde (with sardines) and Pasta alla Norma (a specialty originated in Catania) are the most popular pasta dishes typically Sicilian. Manicotti is another common dish.

After the pasta in the typical Sicilian menu is served a second dishes (secondi) or main dish that could be indifferently meat or fish based. Main dishes based on marine products are couscous al pesce (Trapani) and Pesce spada alla ghiotta (Swordfish).

Sweets are another specialty; examples include: frutta martorana, pignolata, buccellato, cannoli, granita, and cassata siciliana and the Crocetta of Caltanissetta sweet disappeared and rediscovered in 2014.[8]

Candy in Sicily was heavily influenced by the Arab candymakers in the 9th century, and Sicilian candy has preserved more of that influence than almost any other place in Europe.[9] Marzipan fruits may have been invented at the Convent of Eloise at Martorana in the 14th century. In the 17th and 18th centuries, many Sicilian monasteries produced candies and pastries, some with sexual or fertility themes. The only surviving convent to follow this tradition is the Monastery of the Virgins of Palermo, which makes breast-shaped cakes in honor of St Agatha of Sicily.[9] 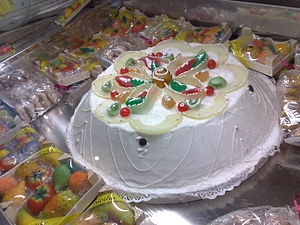 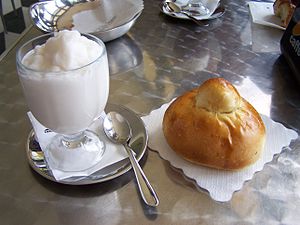 An almond granita with brioche

Granita is particularly famous and well known. It is a semi-frozen dessert of sugar, water, and flavorings originally from the island, and is commonly associated from Catania, even though there is no evident proof that it hails from the particular Sicilian city. Related to sorbet and italian ice, in most of Sicily it has a coarser, more crystalline texture. Food writer Jeffrey Steingarten says that "the desired texture seems to vary from city to city" on the island; on the west coast and in Palermo, it is at its chunkiest, and in the east it is nearly as smooth as sorbet.[10] This is largely the result of different freezing techniques: the smoother types are produced in a gelato machine, while the coarser varieties are frozen with only occasional agitation, then scraped or shaved to produce separated crystals. 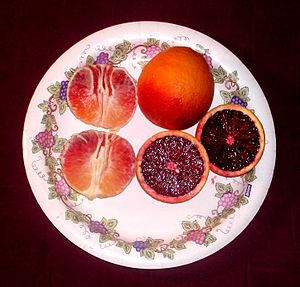 Sicily uses citrus fruits in their cuisine. Many were first introduced by the Arabs from the 9th to 11th centuries, but some have been brought more recently to the region as well such as the Washington navel from Brazil. Examples of the citrus fruits found in Sicily:[11] 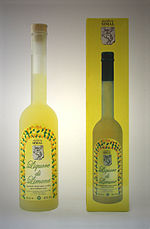 Limoncello is a popular and strong lemon liqueur.

For the main meal Sicilians drink mostly wine. The soil and the climate in Sicily are ideal for growing grapes, mainly due to Mount Etna, and a wine-making tradition on the island has operated since the Greeks set up their first colonies on the island. Today, all provinces of the island produced wine and wine by the introduction of modern methods of Sicily established itself on the European wine market.

Sicilian red wines have an alcoholic content of 12.5 to 13.5% and are usually drunk in the evening with roast or grilled meat. Well-known red wines include the Cerasuolo di Vittoria, the Nero d'Avola mainly those produced around Noto (Siracusa). The dry and white wines and rosés usually have an alcoholic content from 11.5 to 12.5% and are mainly taken with fish, poultry and pasta dishes.

In addition, various dessert wines are produced, such as the famous Marsala, the Malvasia delle Lipari.

More typical Sicilian drinks are the limoncello, a lemon liqueur, and the Amaro Siciliano, a herbal drink, which is often consumed after meals as a digestive. 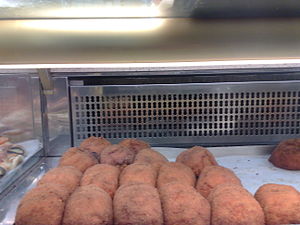 Sicilians eat large quantities of street food; very famous are the arancini (a form of deep-fried rice croquettes). Diffused in the Palermo region is pani ca meusa and pane con panelle, while in the Catania region is very common to find Cartocciate and Cipolline.