Sicilian pizza is pizza prepared in a manner that originated in Sicily, Italy. In the United States, the phrase Sicilian pizza is often synonymous with thick-crust or deep-dish pizza derived from the Sicilian sfincione [sfiŋˈtʃoːne].[1]

It is believed that Sicilian pizza, also known as sfincione or focaccia with toppings, was popular on the western portion of the island as far back as the 1860s.[2] Pizza was a popular dish in western Sicily by the mid-19th century.[1] The version with tomatoes was not available prior to the 17th century.[1] It eventually reached America in a slightly altered form, with thicker crust and a rectangular shape.[3]

Traditional Sicilian pizza is often thick crusted and rectangular, but also round and similar to the Neapolitan pizza. It is often topped with onions, anchovies, tomatoes, herbs and strong cheese such as caciocavallo and toma.[1] Other versions do not include cheese.[4] The Sicilian methods of making pizza are linked to local culture and country traditions,[5] so there are differences in preparing pizza even among the Sicilian regions of Palermo, Catania, Siracusa and Messina.

The sfincione[6] (or sfinciuni in Sicilian language) is a very common variety of pizza that originated in the province of Palermo. Unlike the more familiar Neapolitan pizza, it is typically rectangular, with more dough, sauce and cheese. An authentic recipe often calls for herbs, onion, tomato sauce, strong cheese and anchovies.[1] The sauce is sometimes placed on top of the toppings to prevent it from soaking into the thick dough.[3] 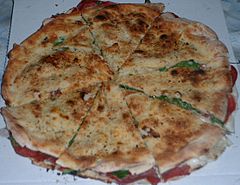 The pizzòlu from the province of Siracusa

In the province of Siracusa, especially in Solarino and Sortino, the pizzòlu is a kind of round stuffed pizza.[7]

In the province of Catania the traditional scacciata is made in two different ways: a first layer made of dough covered, within the city, by a local cheese (tuma) and anchovies or, in the region around Catania, by potatoes, sausages, broccoli, and tomato sauce. In both cases a second layer of dough brushed with eggs covers everything. Also in the region of Catania, in Zafferana Etnea and in Viagrande a typical pizza siciliana is a fried calzone stuffed with cheese and anchovies.

In the United States, a Sicilian pizza is typically a square pie[8] with dough over an inch thick, a crunchy base, and an airy interior.[9] It is derived from the sfinciuni and was introduced in the United States by the first Italian (Sicilian) immigrants. Sicilian-style pizza is popular in Italian-American enclaves[4] throughout Massachusetts, Michigan, Oregon, Connecticut, New York, and New Jersey.