From Infogalactic: the planetary knowledge core
(Redirected from Sicilian revolution of independence of 1848)
Jump to: navigation, search

The Sicilian revolution of independence of 1848 occurred in a year replete with revolutions and popular revolts. It commenced on 12 January 1848, and therefore was one of the first of the numerous revolutions to occur that year. Three revolutions had previously occurred on the island of Sicily starting from 1800 against Bourbon rule: this final one resulted in an independent state surviving for 16 months. The constitution that survived the 16 months was quite advanced for its time in liberal democratic terms, as was the proposal of an Italian confederation of states. It was in effect a curtain raiser to the end of the Bourbon kingdom of the Two Sicilies which was started by Giuseppe Garibaldi's Expedition of the Thousand in 1860 and culminated with the Siege of Gaeta of 1860-1861.

Flag used by Sicilians during the revolution.

The former kingdoms of Naples and Sicily were formally reunited following the 1815 Congress of Vienna to become the Bourbon kingdom of the Two Sicilies. Both kingdoms had previously comprised the single Kingdom of Sicily (created by the Normans in the 11th century) during the 12th and 13th centuries, and were split in two following the revolt of the Sicilian Vespers in 1282.

The seeds of the revolution of 1848 were sown prior to the Congress of Vienna, in 1814. This was during the tumultuous Napoleonic period when the Bourbon court was forced to escape from Naples and set up its royal court in Palermo with the assistance of the English navy. The Sicilian nobles were able to take the opportunity to force on the Bourbons a new constitution for Sicily that was based on the Westminster system of parliamentary government, and was in fact quite a liberal constitution for the time. However, post Congress of Vienna, Ferdinand IV of Naples (and III of Sicily) immediately abolished the constitution upon returning the royal court to Naples.

Political events after the revolution

The 1848 revolution was substantially organized from, and centered in, Palermo. The popular nature of the revolt is evident in the fact that posters and notices were being handed out a full three days before the substantive acts of the revolution occurred on 12 January, 1848. The timing was deliberately planned to coincide with the birthday of Ferdinand II of the Two Sicilies, himself born in Palermo in 1810 (during the Napoleonic period mentioned above). 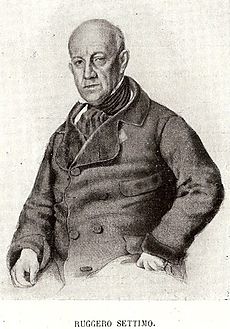 The Sicilian nobles were immediately able to resuscitate the constitution of 1812, which included the principles of representative democracy and the centrality of Parliament in the government of the state. Vincenzo Fardella was elected president of Sicilian Parliament. The idea was also put forward for a confederation of all the states of Italy. At this point it should be mentioned that the Sicilian Parliament was never able to control the well fortified city of Messina, which ultimately would be used to take back the island by force. Similarly, it was the city of Messina that held out the longest against Garibaldi’s attack on the island in 1860.

Thus Sicily survived as a quasi-independent state for sixteen months, with the Bourbon army taking back full control of the island on 15 May 1849 by force. The effective head of state during this period was Ruggero Settimo. On capitulating to the Bourbons, Settimo escaped to Malta where he was received with the full honours of a head of state. He remained exiled there for the rest of his life and died there in 1863. Upon the formation of the new Kingdom of Italy in 1861, Settimo was offered the position of first President of the Senate of the newly created national parliament, but he was forced to decline for health reasons. Nevertheless, this invitation provides more than a casual hint as to the nexus the existed between the events of 1848 and 1860-61 in the History of Italy.[citation needed]

The Revolution which began in Palermo was one of a series of such events in Italy, though perhaps more violent than others. It quickly spread across the island and throughout Italy, where it prompted Charles Albert, King of Sardinia, to follow the example of Ferdinand II and issue a hastily written constitution. In imitation of these events, riots and revolutions followed around Europe at the same time, and may be considered a taste of the socialist revolts to come.