For the band, see Sick Man of Europe (band)

The label of "sick man of Europe" is given to a European country experiencing a time of economic difficulty or impoverishment. The term was first used in the mid-19th century to describe the Ottoman Empire, but has since been applied at one time or another to nearly every other major country in Europe. 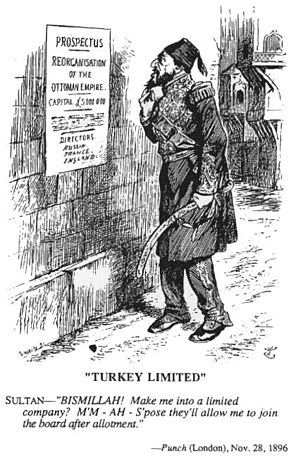 Caricature from Punch magazine, dated November 28, 1896. It shows Sultan Abdul Hamid II in front of a poster which announces the reorganisation of the Ottoman Empire. The empire's value is estimated at 5 million pounds. Russia, France and England are listed as the directors of the reorganisation. The caricature refers to the Ottoman Empire, because it was increasingly falling under the financial control of the European powers and had lost territory.

It is not easy to determine the actual source of the quotation. The articles cited above refer to documents held or communicated personally. The most reliable, publicly available source appears to be a book by Harold Temperley, published in 1936.[4] Temperley gives the date for the first conversation as 9 January 1853, like Goldfrank.[2] According to Temperley, Seymour in a private conversation had to push the Tsar to be more specific about the Ottoman Empire. Eventually, the Tsar stated, "Turkey seems to be falling to pieces, the fall will be a great misfortune. It is very important that England and Russia should come to a perfectly good understanding... and that neither should take any decisive step of which the other is not apprized." And then, closer to the attributed phrase: “We have a sick man on our hands, a man gravely ill, it will be a great misfortune if one of these days he slips through our hands, especially before the necessary arrangements are made.”[5]

Showing the disagreement between the two countries on the Eastern Question, it is important to add that the British Ambassador G. H. Seymour agreed with Tsar Nicholas's diagnosis, but he very deferentially disagreed with the Tsar's recommended treatment of the patient; he responded, "Your Majesty is so gracious that you will allow me to make one further observation. Your Majesty says the man is sick; it is very true; but your Majesty will deign to excuse me if I remark, that it is the part of the generous and strong man to treat with gentleness the sick and feeble man."[6]

Temperley then asserts, “The ‘sickliness’ of Turkey obsessed Nicholas during his whole reign. What he really said was omitted in the Blue Book from a mistaken sense of decorum. He said not the ‘sick man’ but the ‘bear dies…the bear is dying… you may give him musk but even musk will not long keep him alive.’”[7]

Neither Nicholas nor Seymour completed the locution with the prepositional phrase "of Europe," which appears to have been added later and may very well have been journalistic misquotation. Take, for example, the first appearance of the phrase "sick man of Europe" in the New York Times (12 May 1860):

The condition of Austria at the present moment is not less threatening in itself, though less alarming for the peace of the world, than was the condition of Turkey when the Tsar Nicholas invited England to draw up with him the last will and testament of the 'sick man of Europe.' It is, indeed, hardly within the range of probability that another twelvemonth should pass over the House of Habsburg without bringing upon the Austrian Empire a catastrophe unmatched in modern history since the downfall of Poland.

One should note not only that this is not what Nicholas was trying to do or what he said, but that the author of this article was using the term to point to a second "sick man," this one more generally accepted as a European empire, the Habsburg Monarchy.[8]

Later, this view[9] led the Allies in World War I to underestimate the Ottoman Empire, leading in part to the disastrous Gallipoli Campaign.[citation needed] However, the "sick man" eventually collapsed after defeat in the Middle Eastern theatre of World War I.

Since the inception of the phrase, virtually every European country, at one point or another, has been referred to as "the sick man of Europe."

Throughout the 1970s, the United Kingdom was sometimes called the "sick man of Europe" by critics of its government at home, because of industrial strife and poor economic performance compared to other European countries,[10] culminating with the Winter of Discontent of 1978–9.

In the late 1990s the press[which?] labeled Germany with this term because of its economic problems, especially due to the costs of German reunification after 1990, which were estimated to amount to over €1.5 trillion (statement of Freie Universität Berlin).[10]

In May 2005, The Economist attributed this title to Italy, describing it as "the real sick man of Europe." This refers to Italy's structural and political difficulties thought to inhibit economic reforms to relaunch economic growth.[11] In 2008, The Daily Telegraph also used the term to describe Italy.[12]

The term "sick man of Europe" was applied to Russia in the book Kremlin Rising: Vladimir Putin's Russia and the End of Revolution by Peter Baker and Susan Glasser,[13] and by Mark Steyn in his 2006 book America Alone: The End of the World as We Know It.

A report by Morgan Stanley referred to France as the "new sick man of Europe."[15] This label was reaffirmed in January 2014 by European newspapers such as The Guardian and Frankfurter Allgemeine.[16][17] They justified this with France's high unemployment, weak economic growth and poor industrial output.[18]

In July 2009, the nickname was given by EurActiv to Greece due to the 2008 Greek riots, rising unemployment and political corruption, bureaucracy and inefficiency.[19]

The 2009 Cheap Trick album The Latest contains a song entitled "Sick Man of Europe". It was also the name of an early line-up of the band.[citation needed]