From Infogalactic: the planetary knowledge core
Jump to: navigation, search
This article is about the town Side on the Mediterranean coast of Turkey. For other uses of "Side", see Side (disambiguation).

Side (Greek: Σίδη) is an ancient Greek city on the southern Mediterranean coast of Turkey, a resort town and one of the best-known classical sites in the country. It lies near Manavgat and the village of Selimiye, 78 km from Antalya in the province of Antalya.[1]

It is located on the eastern part of the Pamphylian coast, which lies about 20 km east of the mouth of the Eurymedon River. Today, as in antiquity, the ancient city is situated on a small north-south peninsula about 1 km long and 400 m across.

Strabo and Arrian both record that Side was founded by Greek settlers from Cyme in Aeolis, a region of western Anatolia. This most likely occurred in the 7th century BC. Its tutelary deity was Athena, whose head adorned its coinage.

Dating from the tenth century B.C., its coinage bore the head of Athena (Minerva), the patroness of the city, with a legend. Its people, a piratical horde, quickly forgot their own language to adopt that of the aborigines.

Possessing a good harbour for small-craft boats, Side's natural geography made it one of the most important places in Pamphylia and one of the most important trade centres in the region. According to Arrian, when settlers from Cyme came to Side, they could not understand the dialect. After a short while, the influence of this indigenous tongue was so great that the newcomers forgot their native Greek and started using the language of Side. Excavations have revealed several inscriptions written in this language. The inscriptions, dating from the 3rd and 2nd centuries BC, remain undeciphered, but testify that the local language was still in use several centuries after colonisation. Another object found in the excavations at Side, a basalt column base from the 7th century BC and attributable to the Neo-Hittites, provides further evidence of the site's early history. The name Side may be Anatolian in origin, meaning pomegranate.[citation needed]

Next to no information exists concerning Side under Lydian and Persian sovereignty. 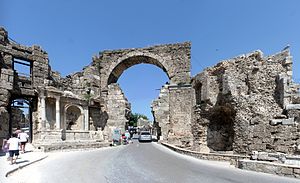 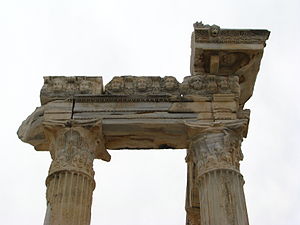 Alexander the Great occupied Side without a struggle in 333 BC. Alexander left only a single garrison behind to occupy the city. This occupation, in turn, introduced the people of Side to Hellenistic culture, which flourished from the 4th to the 1st century BC. After Alexander's death, Side fell under the control of one of Alexander's generals, Ptolemy I Soter, who declared himself king of Egypt in 305 BC. The Ptolemaic dynasty controlled Side until it was captured by the Seleucid Empire in the 2nd century BC. Yet, despite these occupations, Side managed to preserve some autonomy, grew prosperous, and became an important cultural centre. 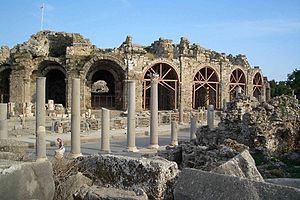 Walls of the ancient theatre of Side

In 190 BC a fleet from the Greek island city-state of Rhodes, supported by Rome and Pergamum, defeated the Seleucid King Antiochus the Great's fleet, which was under the command of the fugitive Carthaginian general Hannibal. The defeat of Hannibal and Antiochus the Great meant that Side freed itself from the overlord-ship of the Seleucid Empire. The Treaty of Apamea (188 BC) forced Antiochus to abandon all European territories and to cede all of Asia Minor north of the Taurus Mountains to Pergamum. However, the dominion of Pergamum only reached de facto as far as Perga, leaving Eastern Pamphylia in a state of uncertain freedom. This led Attalus II Philadelphus to construct a new harbour in the city of Attalia (the present Antalya), although Side already possessed an important harbour of its own. Between 188 and 36 BC Side minted its own money, tetradrachms showing Nike and a laurel wreath (the sign of victory).

In the 1st century BC, Side reached a peak when the Cilician pirates established their chief naval base and a centre for their slave-trade.

The consul Servilius Vatia defeated these brigands in 78 BC and later the Roman general Pompey in 67 BC, bringing Side under the control of Rome and beginning its second period of ascendancy, when it established and maintained a good working relationship with the Roman Empire.[2]

Emperor Augustus reformed the state administration and placed Pamphylia and Side in the Roman province of Galatia in 25 BC, after the short reign of Amyntas of Galatia between 36 and 25 BC. Side began another prosperous period as a commercial centre in Asia Minor through its trade in olive oil. Its population grew to 60,000 inhabitants. This period would last well into the 3rd century AD. Side also established itself as a slave-trading centre in the Mediterranean. Its large commercial fleet engaged in acts of piracy, while wealthy merchants paid for such tributes as public works, monuments, and competitions as well as the games and gladiator fights. Most of the extant ruins at Side date from this period of prosperity. 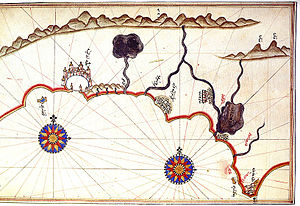 One of the maps (portolani) of Piri Reis, taken from the Kitab-i Bahriye, which Piri produced in several editions, supplementing in 1520, but integrating it into subsequent editions.

Side was the home of Eustathius of Antioch, of the philosopher Troilus, of the fifth-century ecclesiastical writer Philip; of the famous lawyer Tribonian.[3]

Side began a steady decline from the 4th century on. Even defensive walls could not stop successive invasions of highlanders from the Taurus Mountains. During the 5th and 6th centuries, Side experienced a revival, and became the seat of the Bishopric of Eastern Pamphylia. Arab fleets, nevertheless, raided and burned Side during the 7th century, contributing to its decline. The combination of earthquakes, Christian zealots and Arab raids, left the site abandoned by the 10th century, its citizens having emigrated to nearby Antalya.[2]

In the 12th century, Side temporarily established itself once more as a large city. An inscription found on the site of the former ancient city shows a considerable Jewish population in early Byzantine times. However, Side was abandoned again after being sacked. Its population moved to Antalya, and Side became known as Eski Adalia 'Old Antalya' and was buried. 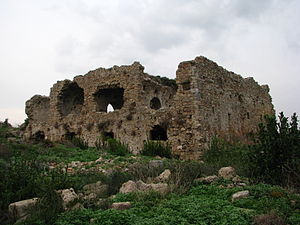 A hospital dating back to the 6th century. 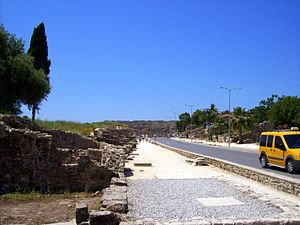 This portion of the main street in Side is lined with the ruins of homes or shops, many of which feature their original mosaic tile flooring.

As capital of the Roman province of Pamphylia Prima, Side was ecclesiastically the metropolitan see. The earliest known bishop was Epidaurus, presiding at the Synod of Ancyra, 314. Others are John, fourth century; Eustathius, 381; Amphilochius, 426-458, who played an important part in the history of the time; Conon, 536; Peter, 553; John, 680-692; Mark, 879; Theodore, 1027-1028; Anthimus, present at the synod held at Constantinople in 1054; John, then counsellor to the Emperor Michael VII Ducas, presided at a council on the worship of images, 1082; Theodosius and his successor Nicetas, twelfth century. John, present at a synod at Constantinople in 1156. The Notitiae Episcopatuum continued to mention Side as a metropolis of Pamphylia until the thirteenth century. It does not appear in the "Notitia" of Andronicus III. From other documents we learn that in 1315 and for some time previous to that, Sidon had bishops of its own — the Bishop of Sinope was called to the position, but was unable to leave his own diocese; this call was repeated in 1338 and 1345. In 1397 the diocese was united with that of Attalia; in 1400 the Metropolitan of Perge and Attalia was at the same time the administrator of Side.[4][citation needed]

No longer a residential see, Side is today included in the Catholic Church's list of titular sees.[5]

The great ruins are among the most notable in Asia Minor. They cover a large promontory where a wall and a moat separate it from the mainland. During medieval times, the wall and moat were repaired and the promontory houses a wealth of structures.

There are colossal ruins of a theatre complex, the largest of Pamphylia, built much like a Roman amphitheatre that relies on arches to support the sheer verticals. The Roman style was adopted because Side lacked a convenient hillside that could be hollowed out in the usual Greek fashion more typical of Asia Minor. The theatre is less preserved than the theatre at Aspendos, but it is almost as large, seating 15,000 - 20,000 people. With time and the shifting of the earth, the scena wall has collapsed over the stage and the proscenium is in a cataract of loose blocks. It was converted into an open-air sanctuary with two chapels during Byzantine times (5th or 6th century).

The well-preserved city walls provide an entrance to the site through the Hellenistic main gate (Megale Pyle) of the ancient city, although this gate from the 2nd century BC is badly damaged. Next comes the colonnaded street, whose marble columns are no longer extant; all that remains are a few broken stubs near the old Roman baths. The street leads to the a public bath, restored as a museum displaying statues and sarcophagi from the Roman period. Next is the square agora with the remains of the round Tyche and Fortuna temple (2nd century BC), a periptery with twelve columns, in the middle. In later times it was used as a trading centre where pirates sold slaves. The remains of the theatre, which was used for gladiator fights and later as a church, and the monumental gate date back to the 2nd century. The early Roman Temple of Dionysus is near the theatre. The fountain gracing the entrance is restored. At the left side are the remains of a Byzantine Basilica. A public bath has also been restored.[2]

The remaining ruins of Side include three temples, an aqueduct, and a nymphaeum. Side's nymphaeum – a grotto with a natural water supply dedicated to the nymphs – was an artificial grotto or fountain building of elaborate design.

There is also a virtually unknown, but expansive site, up in the Taurus foothills, several miles inland, known locally as Seleucia. Virtually unknown to the outside world and not represented on the internet at all, it is the Roman garrison, built by Marc Anthony, to support the city of Side. It covers at least a couple of square miles and is almost completely unexcavated, apart from two weeks in 1975, when the Turkish government funded two weeks of excavations. The site was, apparently, finally abandoned in the 7th century, when an earthquake caused the spring which fed the site with water to dry up completely. Many of the buildings are in remarkably good shape, particularly since, due to the lack of available stone, a significant quantity of the sites stonework contains egg and gravel based concrete blocks.[citation needed]

Turkish archaeologists have been excavating Side since 1947 and intermittently continue to do so.[6]

In 1895 Turkish Muslim[7][8][9] refugees from Crete moved to the ruined town and called it Selimiye. Today, Side has become a popular holiday destination and experiences a new revival.

It was a popular spot for watching the solar eclipse of March 29, 2006.