Breese was born in 1800 in Whitesboro, New York, the son of Arthur Breese and Catherine Livingston, daughter of Henry Beekman Livingston and a member of the Livingston family.[2] His brother was Samuel Livingston Breese, and he was a cousin of Samuel Morse.[3]

Breese's mother died in 1808, and he was mentored by Rev. Jesse Townsend. He became friends during this time with Elias Kent Kane, a distant cousin of his through the Schuyler family of New York. Townsend groomed the young Breese for college, where he entered Hamilton College at just 14 years old, then transferred to Union College in 1816.[2] In 1818, he graduated third in his class of 64 and was a member of the New York Alpha of the Phi Beta Kappa.[4] 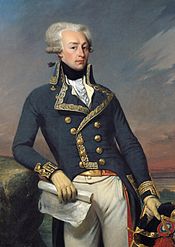 Kane had moved to Illinois following his graduation from Yale College in 1814, and requested the assistance of Breese.[4] Breese accepted, and would become a pioneer of Illinois.[6]

In 1820, the capital of Illinois was moved to Vandalia, in which Breese was responsible for moving the State Department's records, which he did by wagon.[7] He remained Asst. Secretary of State until the end of the legislative session in 1821, when he began a private law practice in Kaskaskia.[7] 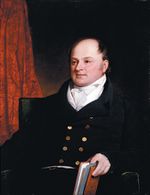 By chance in 1821, he was approached in his law office one day by the Post-Office Department to assume the duties of Postmaster for Kaskaskia. Breese accepted, earning a commission on postage stamp sales.[4]

In 1822, Breese was appointed as the Circuit-Attorney for the Third Judicial District in Illinois. He served in that capacity until 1826, when he was removed by Gov. Ninian Edwards.[4] The following year in 1827, U.S. President John Quincy Adams appointed Sidney United States Attorney for the State of Illinois.[4] He remained in that capacity until Andrew Jackson removed him in 1829, where it was claimed his enemies had played a role in his removal.[8]

Having removed to private practice following his dismissal in 1829, in 1831 he began compiling the reports of the Illinois Supreme Court, publishing the first volumes of such. These were the first books published in Illinois,[8] and were known as the "Breese Reports".[9]

Following the outbreak of the Black Hawk War in 1832, Sidney volunteered for military service, enlisting as a private.[9] He was thereafter elected a Major, and the battalion assembled at Beardstown, marching to the Illinois River near Peru. After arriving at Camp Wilborn, the Lieutenant-Colonel Theophilus W. Smith resigned for another position, and Breese was elected to fill the open position. Under his command were future Civil War General Robert Anderson and future U.S. President Zachary Taylor.[9]

Following the war, he returned to private practice. In 1833, he was the lead counsel in the defense of Illinois Supreme Court Justice Theophilus W. Smith, whom he had replaced in military command earlier, during his impeachment trial by the Illinois House of Representatives. The defense team included future-Illinois Governor Thomas Ford and future-U.S. Senator Richard M. Young. Led by Breese's pleadings, Judge Smith was acquitted on the charges as the legislature failed to achieve a 2/3ds vote required for conviction.[9]

Following the establishment of the circuit courts in Illinois in 1835, Sidney was appointed a judge in the 2nd Circuit.[9] During this service, a case arose in 1838, which would catapult Breese into the Illinois Supreme Court as a Justice, centered around the question of whether the Governor was able to remove a Secretary of State and appoint another. In a heated partisan atmosphere, Breese delivered a purely legal opinion, one of the most celebrated of the state, which upheld the power of the Governor to do so. The opinion was appealed to the supreme court, where his opinion was overturned.[9] In retaliation, an upset legislature added to the number of justices on the court, appointing Breese to fill one of the new positions.

Justice of the Illinois Supreme Court

In 1841, following the contested legal dispute, Breese assumed the duties as a Justice in the Illinois Supreme Court on February 22. Among the five new appointees to the court made by the legislature, along with Breese, was future-U.S. Senator Stephen A. Douglas.[9] Of the 131 opinions rendered by the court during his tenure, Sidney delivered 34 of them.[10] 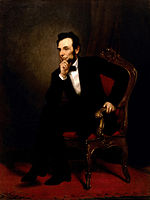 Breese was a contemporary of Abraham Lincoln

In December 1842, Breese was elected as a U.S. Senator from Illinois as a Democrat. During his term he was considered a poor politician by insiders because he devoted his time and energy to the official duties of his office and people of Illinois versus the financiers and special interests of the Democratic Party and Washington establishment.[11] Talks circulated about his possible candidacy for the U.S. Presidency, but Breese was more interested in the working for his state.[12] He was an associate of future-President Abraham Lincoln during this time, as Lincoln served in the Illinois delegation of U.S. House of Representatives.[13]

One of his first speeches was in favor of Texas Annexation, and he introduced legislation in 1845 calling for the annexation,[15] which ultimately occurred later that year.[16] Sidney supported the Mexican–American War which followed, delivering one of the most famous speeches in Senate history on the subject of tactics from the war, in opposition to Senator John C. Calhoun.[16]

Breese was a Democrat expansionist who was vehemently opposed the Oregon Treaty of 1846 with Great Britain, insisting that Britain remain isolated from the Pacific Coast and calling for the current boundaries of Oregon Country to be extended to the 54th parallel, bordering Russian Alaska. The treaty was ultimately signed, in which Sidney proclaimed his country had been unjustly stolen by the British.[16] 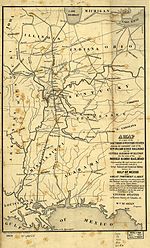 Map of the Illinois Central Railroad from 1850, which Breese is considered the father of

Failure to be renominated

In 1849, he ultimately failed to secure his party's renomination.[14] However, bittersweetly, a project he had long advocated and pushed for while in Washington, the Illinois Central Railroad, was approved as he left office.

Starting in 1835, Breese began lobbying for a railroad connecting the Illinois and Michigan Canal with the lower Mississippi River and ultimately the Pacific Ocean.[9] Upon arriving in Washington, one of his first acts was to introduce legislation, which was passed in 1844, providing for the examination of the possibility of a naval depot and shipyard at the confluence of the Ohio and Mississippi Rivers,[17] This would encourage the government to authorize land for the railroad by having a governmental interest in connecting the depot with the Great Lakes. In 1846, Breese offered another bill requesting the government grant Illinois land to construct the road, which as the Chairman of the Public Lands Committee, Breese made the first full report ever made to Congress on the subject.[18] In the report, Breese urged the importance of the railroad, which would connect the country coast-to-coast in four days, China and the American Atlantic cities in 30 days, China-to-Great Britain in 45 days, and the world with America in 30 days.[19][20]

Sidney offered two more extensive reports in 1848, including constitutional analysis of Senator Douglas's bill in support of the railroad. The railroad bills were consolidated with a bill from Senator King, passed, and signed by President Millard Fillmore in 1850, shortly after Sidney left office.[21] In 1851, the Illinois Central Railroad Company was charted by the State of Illinois, and received the land grants from the federal government.[21]

For his efforts, Breese is remembered as the "father of the Illinois Central Railroad".[22]

Speaker of the Illinois House of Representatives

In 1850, Breese was elected to the Illinois House of Representatives, where he was immediately elevated to the position of speaker. He served a term there, leaving in 1852.[14]

Sidney left the assembly in 1852, returning to private law practice, while also serving as a director of the Ohio and Mississippi Railroad Company.[23] His name was offered as a nomination for Governor of Illinois at numerous conventions, while talk continued of his possible candidacy for the U.S. Presidency, including in 1868, when some thought he could have won for the Democrats.[24]

He rejected a nomination to the Illinois Supreme Court in 1853, and many speculated Breese had ambition to return to the U.S. Senate.[26] However, he was literally forced back into the judiciary of Illinois against his will, accepting an appointment as a Judge on the Circuit Court in 1855, before being elected to the Illinois Supreme Court as a Justice in 1857. He would serve the rest of years on the bench of that court, including stints as the Chief Justice during multiple terms.[12]

During the outbreak of the American Civil War, Breese was by then an elder statesmen of the Democratic Party. He was a Peace Democrat[27] who was strongly pro-states' rights, but opposed secession.[12] As the war raged on, in 1863 Breese proposed radical amendments to the Constitution for the inevitable reconstruction process that would follow the war, one which promised the non-interference of slavery. The amendments also included a complete overhaul of the federal election system, including how the President was elected, and enumerating a new power for the Senate to be the court of last resort for states' rights issues or for the constitutionality of a law to be decided.[27] The amendments were presented to the pro-peace Chicago Times for publication, but the editor deemed them too radical.[27] 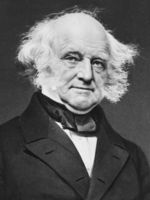 Breese was remembered as a philanthropist who gave his earnings to every church denomination and many worthy causes, accumulating little personal wealth.[12] He encouraged young people studying law enormously, and was noted as being a man who has "a tear for pity, and a hand open as day to melting charity".[12] Breese was a celebrated statesman and scholar in which Illinois's prosperity and judiciary reflects his tireless labor, where his inflexible justice prevented corruption from ever reaching the court he sat on.[24]

The Illinois State Historical Society is home to "The Sidney Breese Papers", which consist of the letters and papers belonging to Breese, including personal letters from U.S. Senator Stephen A. Douglas, U.S. President Martin Van Buren, Lincoln's Secretary of War Simon Cameron, Illinois Governor John Reynolds, U.S. Ambassador to Spain Gustav Körner, and U.S. Secretary of State Lewis Cass, among many others.[28]

In 1823, Sidney married Eliza Morrison, daughter of wealth merchant William Morrison. They had fourteen children, including:[5][12]

Breese is buried in the Carlyle Cemetery in Carlyle, IL.

The town of Breese, Illinois is named in his honor.