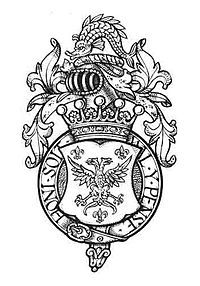 Arms of Sir Sidney Godolphin, KG: An eagle displayed with two heads between three fleurs-de-lis, circumscribed by the Garter, with canting crest: a dolphin embowed

Sidney Godolphin, 1st Earl of Godolphin KG PC (15 June 1645 – 15 September 1712) was a leading British politician of the late 17th and early 18th centuries. He was a Privy Councillor and Secretary of State for the Northern Department before attaining real power as First Lord of the Treasury. He was instrumental in negotiating and passing the Acts of Union 1707 with Scotland, which created the Kingdom of Great Britain.

He had many other roles, including that of Governor of Scilly.

He came from an ancient Cornish family, being the son of Francis Godolphin (1605–1667) and nephew of the poet Sidney Godolphin. At the Restoration he was introduced into the royal household by King Charles II of England, whose favourite he had become, and he also entered the House of Commons as member for Helston, in Cornwall. Although he very seldom addressed the House, and, when he did so, only in the briefest manner, he "gradually acquired a reputation as its chief if not its only financial authority". In 1668 he was a successful intermediary between the King and his sister Henrietta Anne (wife of the Duke of Orléans), in order to secure an agreement with King Louis XIV of France, where Charles would reject his Dutch allies in return for French money.[1] On 12 September Godolphin was appointed Groom of the Bedchamber along with a pension of £500 per annum. In 1669 he was awarded a 31-year lease on all tin mines in Rialton and Retraigh in Cornwall.[1]

Charles appointed Godolphin envoy-extraordinary to Louis XIV in 1672 in order to reassure the French King of Charles's allegiance before Louis attacked the Dutch. Godolphin was with Louis in the field during the Franco-Dutch War but was unimpressed with Louis's capabilities as a military commander.[1]

In March 1679 he was appointed a member of the Privy Council, and in the September following he was promoted, along with Viscount Hyde (afterwards Earl of Rochester) and the Earl of Sunderland, to the chief management of affairs.

Although he voted for the Exclusion Bill in 1680, he was continued in office after the dismissal of Sunderland, and in September 1684 he was created Baron Godolphin of Rialton, and succeeded Rochester as First Lord of the Treasury. After the accession of James II he was made chamberlain to the queen, Mary of Modena, and, along with Rochester and Sunderland, enjoyed the king's special confidence. In 1687 he was named commissioner of the treasury. Godolphin was involved in the payment of approximately £125,000 by Louis XIV to James II of money in return for James's support for Louis, despite Parliament voting James £6,000,000. The historian David Ogg has written that "James and his two ministers, Rochester and Godolphin, were prepared to barter the independence of England for a sum little more than a sixtieth part of that granted by the national legislature".[2]

He was one of the council of five appointed by King James to represent him in London, when he went to join the army after the landing of William of Orange, in England, and, along with Lord Halifax and Lord Nottingham, he was afterwards appointed a commissioner to negotiate with the prince. On the accession of William, though he only obtained the third seat at the treasury board, he was in control of affairs. He retired in March 1690, but, was recalled in the following November and appointed first lord.

While holding this office he for several years continued, in conjunction with John Churchill (the future Duke of Marlborough), a secret correspondence with James II, and is said to have disclosed to James intelligence regarding the intended expedition against Brest. Godolphin was not only a Tory by inheritance, but was thought to have a romantic admiration for the wife of James II. After Fenwick's confession in 1696 regarding the attempted assassination of William III, Godolphin, who was compromised, tendered his resignation; but when the Tories came into power in 1700, he was again appointed Lord Treasurer in May 1703 and retained office for eight years. Though not technically a favourite with Queen Anne, he was, after her accession, appointed to his old office, on the strong recommendation of Marlborough. In 1704 he was also made a Knight of the Garter, and in December 1706 he was created Viscount Rialton and Earl of Godolphin.

Though a Tory, he had an active share in the intrigues which gradually led to the predominance of the Whigs in alliance with Marlborough. The influence of the Marlboroughs with the queen was, however, gradually supplanted by that of Abigail Masham and Robert Harley, Earl of Oxford, and with the fortunes of the Marlboroughs those of Godolphin were indissolubly united. The services of both were so appreciated by the nation that they were able for a time to regard the loss of the queen’s favour with indifference, and even in 1708 to procure the expulsion of Harley from office; but after the High Tory reaction which followed the impeachment of Henry Sacheverell, who abused Godolphin under the name of Volpone, the queen made use of the opportunity to get rid of Marlborough by abruptly dismissing Godolphin from office on 7 August 1710. He died two years later and his estate was worth more than £12,000.

On 16 May 1675 Godolphin married Margaret Blagge, daughter of Thomas Blagge, the pious lady whose life was written by John Evelyn in his book The Life of Mrs Godolphin.[3] She died in childbirth in 1678 bearing his only son, and Godolphin never remarried. Margaret is buried at Breage, Cornwall, the spot marked by a small brass floor plaque erected by the Duke of Leeds. Progeny:

The Whig historian Lord Macaulay said of Godolphin in 1848:

He was laborious, clear-headed, and profoundly versed in the details of finance. Every government, therefore, found him an useful servant; and there was nothing in his opinions or in his character which could prevent him from serving any government. “Sidney Godolphin,” said Charles, “is never in the way, and never out of the way.” This pointed remark goes far to explain Godolphin's extraordinary success in life. He acted at different times with both the great political parties; but he never shared in the passions of either. Like most men of cautious tempers and prosperous fortunes, he had a strong disposition to support whatever existed. He disliked revolutions, and, for the same reason for which he disliked revolutions, he disliked counter-revolutions. His deportment was remarkably grave and reserved, but his personal tastes were low and frivolous; and most of the time which he could save from public business was spent in racing, cardplaying, and cockfighting.[4]

In the opinion of Julian Hoppitt, Godolphin "tirelessly oversaw the dramatic expansion of key areas of the State, providing an element of integrity, continuity, and predictability in a very uncertain environment. He was in a very real sense Marlborough's partner and together the duumvirs oversaw the glory days of the War of the Spanish Succession. In a very real sense Marlborough's dismissal and Godolphin's death the following year marked the end of an era".[5] Roy Sundstrom has asserted that Godolphin is an important figure in the history of England because:

...first he raised the money required to blunt French hegemony in Europe and thus preserved the British constitution and the protestant monarchy; second he was instrumental in planning the military and diplomatic strategy that ultimately defeated Louis XIV; third, as lord high treasurer, he worked to make the Treasury more efficient and attempted to weed out corruption—the Treasury as he left it served England well for the remainder of the eighteenth century; fourth he was instrumental in negotiating and passing the Act of Union with Scotland which created the united kingdom of Great Britain; and fifth he negotiated the creation of a unified East India Company, which would be instrumental in establishing British rule in India.[1]