Sidney Clopton Lanier[1] (February 3, 1842 – September 7, 1881) was an American musician, poet and author. He served in the Confederate army, worked on a blockade running ship for which he was imprisoned (resulting in his catching tuberculosis), taught, worked at a hotel where he gave musical performances, was a church organist, and worked as a lawyer. As a poet he used dialects. He became a flautist and sold poems to publications. He eventually became a university professor and is known for his adaptation of musical meter to poetry. Many schools, other structures and two lakes are named for him.

Sidney Clopton Lanier was born February 3, 1842, in Macon, Georgia,[2] to parents Robert Sampson Lanier and Mary Jane Anderson; he was mostly of English ancestry. His distant French Huguenot ancestors immigrated to England in the 16th century, fleeing religious persecution. He began playing the flute at an early age, and his love of that musical instrument continued throughout his life. He attended Oglethorpe University, which at the time was near Milledgeville, Georgia, and he was a member of the Sigma Alpha Epsilon fraternity. He graduated first in his class shortly before the outbreak of the American Civil War.

He fought in the American Civil War (1861–65), primarily in the tidewater region of Virginia, where he served in the Confederate signal corps. Later, he and his brother Clifford served as pilots aboard English blockade runners. On one of these voyages, his ship was boarded. Refusing to take the advice of the British officers on board to don one of their uniforms and pretend to be one of them, he was captured. He was incarcerated in a military prison at Point Lookout in Maryland, where he contracted tuberculosis[3] (generally known as "consumption" at the time).[4] He suffered greatly from this disease, then incurable and usually fatal, for the rest of his life. 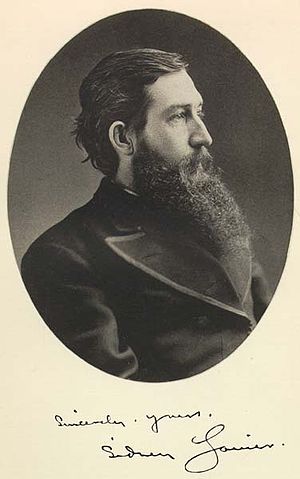 Shortly after the war, he taught school briefly,[3] then moved to Montgomery, Alabama, where he worked as a desk clerk at The Exchange Hotel and also performed as a musician. He was the regular organist at The First Presbyterian Church in nearby Prattville. He wrote his only novel, Tiger Lilies (1867) while in Alabama.[citation needed] This novel was partly autobiographical, describing a stay in 1860 at his grandfather's Montvale Springs resort hotel near Knoxville, Tennessee.[5] In 1867, he moved to Prattville, at that time a small town just north of Montgomery, where he taught and served as principal of a school.

He married Mary Day of Macon in 1867[3] and moved back to his hometown, where he began working in his father's law office.

After taking and passing the Georgia bar, Lanier practiced as a lawyer for several years.[3] During this period he wrote a number of poems, using the "cracker" and "negro" dialects of his day, about poor white and black farmers in the Reconstruction South. He traveled extensively through southern and eastern portions of the United States in search of a cure for his tuberculosis.

While on one such journey in Texas, he rediscovered his native and untutored talent for the flute and decided to travel to the northeast in hopes of finding employment as a musician in an orchestra. Unable to find work in New York City, Philadelphia, or Boston, he signed on to play flute for the Peabody Orchestra in Baltimore, Maryland,[3] shortly after its organization. He taught himself musical notation and quickly rose to the position of first flautist. He was famous in his day for his performances of a personal composition for the flute called "Black Birds", which mimics the song of that species.

In an effort to support Mary and their three sons, he also wrote poetry for magazines. His most famous poems were "Corn" (1875), "The Symphony" (1875), "Centennial Meditation" (1876), "The Song of the Chattahoochee" (1877),[3] "The Marshes of Glynn", (1878)[3] and "Sunrise" (1881). The latter two poems are generally considered his greatest works. They are part of an unfinished set of lyrical nature poems known as the "Hymns of the Marshes", which describe the vast, open salt marshes of Glynn County on the coast of Georgia. (The longest bridge in Georgia is in Glynn County and is named for Lanier.)

Late in his life, he became a student, lecturer, and, finally, a faculty member at the Johns Hopkins University in Baltimore, specializing in the works of the English novelists,[3] Shakespeare, the Elizabethan sonneteers, Chaucer, and the Old English poets. He published a series of lectures entitled The English Novel (published posthumously in 1883) and a book entitled The Science of English Verse (1880), in which he developed a novel theory exploring the connections between musical notation and meter in poetry. 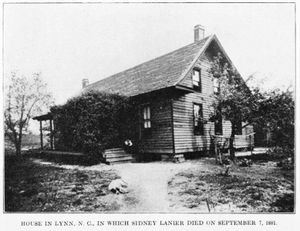 The house in which Lanier died. 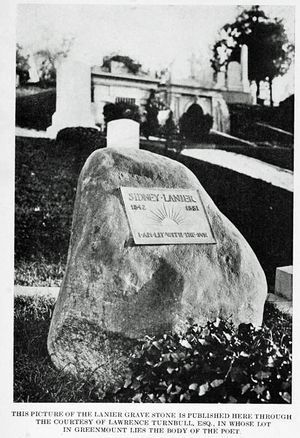 Lanier finally succumbed to complications caused by his tuberculosis[3] on September 7, 1881, while convalescing with his family near Lynn, North Carolina. He was 39. Lanier is buried in Green Mount Cemetery in Baltimore.

With his theory connecting musical notation with poetic meter, and also being described as a deft metrical technical,[6] in his own words 'daring with his poem 'Special Pleading' to give myself such freedom as I desired, in my own style'[7] and also by developing a unique style of poetry written in logaoedic dactyls, which was strongly influenced by the works of his beloved Anglo-Saxon poets. He wrote several of his greatest poems in this meter, including "Revenge of Hamish" (1878), "The Marshes of Glynn" and "Sunrise". In Lanier's hands, the logaoedic dactylic meter led to a free-form, almost prose-like style of poetry that was greatly admired by Henry Wadsworth Longfellow, Bayard Taylor, Charlotte Cushman, and other leading poets and critics of the day. A similar poetical meter was independently developed by Gerard Manley Hopkins at about the same time (there is no evidence that they knew each other or that either of them had read any of the other's works).

Lanier also published essays on other literary and musical topics and a notable series of four redactions of literary works about knightly combat and chivalry in modernized language more appealing to the boys of his day:

He also wrote two travelogues that were widely read at the time, entitled Florida: Its Scenery, Climate and History (1875) and Sketches of India (1876) (although he never visited India).

The Sidney Lanier Cottage in Macon, Georgia is listed on the National Register of Historic Places. The square, stone Monument to Poets of Georgia, located between 7th & 8th St. in Augusta, lists Lanier as one of Georgia's four great poets, all of whom saw Confederate service.[8] The southeastern side bears this inscription: "To Sidney Lanier 1842–1880. The catholic man who hath nightly won God out of knowledge and good out of infinite pain and sight out of Blindness and Purity out of stain." The other poets on the monument are James Ryder Randall, Fr. Abram Ryan, and Paul Hayne.

Baltimore honored Lanier with a large and elaborate bronze and granite sculptural monument, created by Hans K. Schuler and located on the campus of the Johns Hopkins University. In addition to the monument at Johns Hopkins, Lanier was also later memorialized on the campus of Duke University in Durham, North Carolina. Upon the construction of the iconic Duke Chapel between 1930 and 1935 on the university's West Campus, a statue of Lanier was included alongside two fellow prominent Southerners, Thomas Jefferson and Robert E. Lee.[9] This statue, which appears to show a Lanier older than the 39 years he actually lived, is situated on the right side of the portico leading into the Chapel narthex. It is prominently featured on the cover of the 2010 autobiographical memoir Hannah's Child, by Stanley Hauerwas, a Methodist theologian teaching at Duke Divinity School.[10]

Lanier's poem "The Marshes of Glynn" is the inspiration for a cantata by the same name that was created by the modern English composer Andrew Downes to celebrate the Royal Opening of the Adrian Boult Hall in Birmingham, England, in 1986.

Piers Anthony used Lanier, his life, and his poetry in his science-fiction novel Macroscope (1969). He quotes from "The Marshes of Glynn" and other references appear throughout the novel.

Several entities have been named for Sidney Lanier: 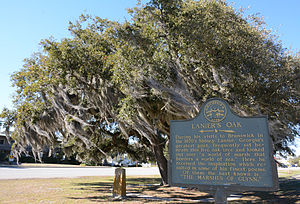 Sidney Lanier sat under an oak tree at this location and was inspired to write the poem The Marshes of Glynn. (The original oak tree died.)