The Siege of Acre of 1799 was an unsuccessful French siege of the Ottoman-defended, walled city of Acre (now Akko in modern Israel) and was the turning point of Napoleon's invasion of Egypt and Syria. It was one of Napoleon's few defeats.

Acre was a site of significant strategic importance due to its commanding position on the route between Egypt and Syria. Bonaparte wanted to capture it following his invasion of Egypt. He hoped to incite a Syrian rebellion against the Ottomans and threaten British rule in India. After the Siege of Jaffa the defenders of the citadel were even more fierce.[citation needed]

The French attempted to lay siege on 20 March using only their infantry. Napoleon believed the city would capitulate quickly to him.[3] In correspondence with one of his subordinate officers he voiced his conviction that a mere two weeks would be necessary to capture the linchpin of his conquest of the Holy Land before marching on to Jerusalem.

However, the troops of the capable Jezzar Pasha, refusing to surrender, withstood the siege for one and a half months. Haim Farhi, al-Jazzar's Jewish adviser and right-hand man, played a key role in the city's defense, directly supervising the battle against the siege. After Napoleon's earlier conquest of Jaffa, rampaging French troops had savagely sacked the conquered city, and thousands of Albanian prisoners of war were massacred on the sea-shore, prior to the French move further northwards. These facts were well known to the townspeople and defending troops (many of them Albanians) in Acre, and the prospect is likely to have stiffened their resistance.

A Royal Navy flotilla under Commodore Sidney Smith helped to reinforce the Ottoman defences and supplied the city with additional cannon manned by sailors and marines. Smith used his command of the sea to capture the French siege artillery being sent by a flotilla of gunboats from Egypt and to bombard the coastal road from Jaffa.[Note 1] An artillery expert from the fleet, Antoine Le Picard de Phélippeaux, then redeployed against Napoleon's forces the artillery pieces which the British had intercepted.

Smith anchored the line-of-battle ships Tigre and Theseus so their broadsides could assist the defence. The gunboats, which were of shallower draft, could come in closer, and together they helped repel repeated French assaults.

On 16 April a Turkish relief force was fought off at the Mount Tabor. By early May, replacement French siege artillery had arrived overland and a breach was forced in the defences. At the culmination of the assault, the besieging forces managed to make a breach in the walls. 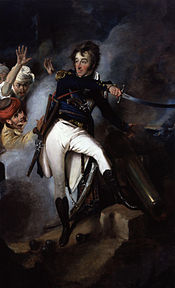 A painting reflecting a British view, assigning the main heroic role at the Acre siege to Admiral Smith and relegating the Turks to a secondary role

However, after suffering many casualties to open this entry-point, Napoleon's soldiers found, on trying to penetrate the city, that Farhi and DePhelipoux had, in the meantime, built a second wall, several feet deeper within the city where al-Jazzar's garden was. Discovery of this new construction convinced Napoleon and his men that the probability of their taking the city was minimal. Moreover, after the assault was again repelled, Turkish reinforcements from Rhodes were able to land.

Having underestimated the stubborn attitude of the defending forces combined with a British blockade of French supply harbours and harsh weather conditions, Napoleon's forces were left hungry, cold and damp. Plague had struck the French camp as a result of the desperate condition of the men, and had by now led to the deaths of about 2,000 soldiers.

Throughout the siege, both Napoleon and Jezzar sought in vain the assistance of the Shihab leader, Bashir—ruler of much of present-day Lebanon. Bashir remained neutral. As things turned out, it was the French side which suffered most from the attitude of Bashir, whose intervention on their side might have turned the balance.

Finally, the siege was raised. Napoleon Bonaparte retreated two months later on 21 May after a failed final assault on 10 May, and withdrew to Egypt.

The allusions from Classical Antiquity included in the speech are to the Sacred Band of Thebes and the Persian Immortals—elite units of, respectively, the city state of Thebes and the Achaemenid Kings of Persia; and to the Battle of Issus where Alexander the Great decisively defeated the latter. (In fact, though Acre was not conquered, Napoleon's Imperial Guard did come to be informally called "The Immortals."[5])

Some hold that a statement attributed to Napoleon during the war, according to which he promised to return the land to the Jews if he were to succeed in his conquest of Israel, was meant to capture Farhi’s, a Syrian Jew, attention and betray his master by switching his support to the French. Whether this is true or not, Farhi defended the city with the rest of the Turks.[citation needed]

However, Napoleon never showed any particular interest in winning over the Jews during his campaign,[6] though his account of the military campaign records that a rumour among Syrian Jews had it that after Napoleon took Acre, he would go to Jerusalem and restore Solomon's temple[7] and decrees were passed in favour of Jews (and Coptic Christians and women) in French-controlled Egypt.[8] Whatever Napoleon's actual intentions, these stories and rumors are considered to be among the earliest harbingers of what would become the Zionist Movement.

In present-day Acre, the hill on which Napoleon set his camp, south-east of the city walls of Acre, is still known as "Napoleon's Hill" (גבעת נפוליון). Acre also has a Napoleon Bonaparte Street (רחוב נפוליון בונפרטה), the only Israeli city with such a street name.

Among the Arab population of the Old City of Acre, the knowledge of their forebears having successfully withstood the barrage of such a world-famous conqueror is a source of civic pride and local patriotism. In a folk tale current among Acre Arabs, Napoleon, upon lifting the siege of Acre, let a cannon shoot his hat into the city "so that at least part of him would enter into Acre".[9]