The Siege of Baghdad, which lasted from January 29 until February 10, 1258, entailed the investment, capture, and sack of Baghdad, the capital of the Abbasid Caliphate, by Ilkhanate Mongol forces and allied troops. The Mongols were under the command of Hulagu Khan, brother of the khagan Möngke Khan, who had intended to further extend his rule into Mesopotamia but not to directly overthrow the Caliphate. Möngke, however, had instructed Hulagu to attack Baghdad if the Caliph Al-Musta'sim refused Mongol demands for his continued submission to the khagan and the payment of tribute in the form of military support for Mongol forces in Iran.

Hulagu began his campaign in Iran with several offensives against Nizari groups, including the Assassins, who lost their stronghold of Alamut. He then marched on Baghdad, demanding that Al-Musta'sim accede to the terms imposed by Möngke on the Abbasids. Although the Abbasids had failed to prepare for the invasion, the Caliph believed that Baghdad could not fall to invading forces and refused to surrender. Hulagu subsequently besieged the city, which surrendered after 12 days. During the next week, the Mongols sacked Baghdad, committing numerous atrocities and destroyed the Abbasids' vast libraries, including the House of Wisdom. The Mongols executed Al-Musta'sim and massacred many residents of the city, which was left greatly depopulated. The siege is considered to mark the end of the Islamic Golden Age, during which the caliphs had extended their rule from the Iberian Peninsula to Sindh, and which was also marked by many cultural achievements.[7]

Baghdad had for centuries been the capital of the Abbasid Caliphate, the third caliphate whose rulers were descendants of Abbas, an uncle of Muhammad. In 751, the Abbasids overthrew the Umayyads and moved the Caliph's seat from Damascus to Baghdad. At the city's peak, it was populated by approximately one million people and was defended by an army of 60,000 soldiers. By the middle of the 13th century, however, the power of the Abbasids had declined and Turkic and Mamluk warlords often held power over the Caliphs. Baghdad still retained much symbolic significance, however, and it remained a rich and cultured city. The Caliphs of the 12th and 13th centuries had begun to develop links with the expanding Mongol Empire in the east. Caliph an-Nasir li-dini'llah, who reigned from 1180–1225, may have attempted an alliance with Genghis Khan when Muhammad II of Khwarezm threatened to attack the Abbasids.[8] It has been rumored[9] that some Crusader captives were sent as tribute to the Mongol khagan.

According to The Secret History of the Mongols, Genghis and his successor, Ögedei Khan, ordered their general Chormaqan to attack Baghdad.[10] In 1236, Chormaqan led a division of the Mongol army to Irbil,[11] which remained under Abbasid rule. Further raids on Irbil and other regions of the caliphate became nearly annual occurrences.[12] Some raids were alleged to have reached Baghdad itself,[13] but these Mongol incursions were not always successful, with Abbasid forces defeating the invaders in 1238[14] and 1245.[15]

Despite their successes, the Abbasids hoped to come to terms with the Mongols and by 1241 had adopted the practice of sending an annual tribute to the court of the khagan.[13] Envoys from the Caliph were present at the coronation of Güyük Khan as khagan in 1246[16] and that of Möngke Khan in 1251.[17] During his brief reign, Güyük insisted that the Caliph Al-Musta'sim fully submit to Mongol rule and come personally to Karakorum. Blame for the Caliph's refusal and for other resistance offered by the Abbasids to increased attempts by the Mongols to extend their power was placed by the khagans on Chormaqan's lieutenant and successor, Baiju.

In 1257, Möngke resolved to establish firm authority over Mesopotamia, Syria, and Iran. The khagan gave his brother, Hulagu, authority over a subordinate khanate and army, the Ilkhanate, and instructions to compel the submission of various Muslim states, including the caliphate. Though not seeking the overthrow of Al-Musta'sim, Möngke ordered Hulagu to destroy Baghdad if the Caliph refused his demands of personal submission to Hulagu and the payment of tribute in the form of a military detachment, which would reinforce Hulagu's army during its campaigns against Iranian Ismaili states.

In preparation for his invasion, Hulagu raised a large expeditionary force, conscripting one out of every ten military-age males in the entirety of the Mongol Empire, assembling what may have been the most numerous Mongol army to have existed and, by one estimate, 150,000 strong.[18] Generals of the army included the Oirat administrator Arghun Agha, Baiju, Buqa Temür, Guo Kan, and Kitbuqa, as well as Hulagu's brother Sunitai and various other warlords.[19] The force was also supplemented by Christian forces, including the King of Armenia and his army, a Frankish contingent from the Principality of Antioch,[20] and a Georgian force, seeking revenge on the Muslim Abbasids for the sacking of their capital, Tiflis, decades earlier by the Khwarazm-Shahs.[21] About 1,000 Chinese artillery experts accompanied the army,[22] as did Persian and Turkic auxiliaries, according to Ata-Malik Juvayni, a contemporary Persian observer.

Hulagu led his army first to Iran, where he successfully campaigned against the Lurs, the Bukhara, and the remnants of the Khwarezm-Shah dynasty. After subduing them, Hulagu directed his attention toward the Ismaili Assassins and their Grand Master, Imam 'Ala al-Din Muhammad, who had attempted the murder of both Möngke and Hulagu's friend and subordinate, Kitbuqa. Though Assassins failed in both attempts, Hulagu marched his army to their stronghold of Alamut, which he captured. The Mongols later executed the Assassins' Grand Master, Imam Rukn al-Dun Khurshah, who had briefly succeeded 'Ala al-Din Muhammad from 1255-1256.

After defeating the Assassins, Hulagu sent word to Al-Musta'sim, demanding his acquiescence to the terms imposed by Möngke. Al-Musta'sim refused, in large part due to the influence of his advisor and grand vizier, Ibn al-Alkami. Historians have ascribed various motives to al-Alkami's opposition to submission, including treachery[23] and incompetence,[24] and it appears that he lied to the Caliph about the severity of the invasion, assuring Al-Musta'sim that, if the capital of the caliphate was endangered by a Mongol army, the Islamic world would rush to its aid.[24]

Although he replied to Hulagu's demands in a manner that the Mongol commander found menacing and offensive enough to break off further negotiation,[25] Al-Musta'sim neglected to summon armies to reinforce the troops at his disposal in Baghdad. Nor did he strengthen the city's walls. By January 11 the Mongols were close to the city,[24] establishing themselves on both banks of the Tigris River so as to form a pincer around the city. Al-Musta'sim finally decided to do battle with them and sent out a force of 20,000 cavalry to attack the Mongols. The cavalry were decisively defeated by the Mongols, whose sappers breached dikes along the Tigris River and flooded the ground behind the Abbasid forces, trapping them.[24]

Siege of the city 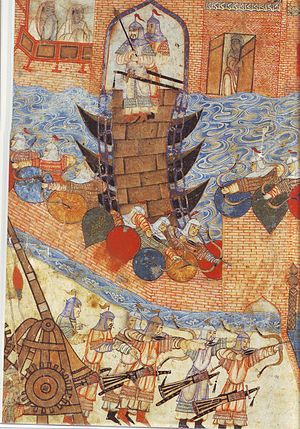 Persian painting (14th century) of Hülegü's army besieging a city. Note use of the siege engine

On January 29, the Mongol army began its siege of Baghdad, constructing a palisade and a ditch around the city. Employing siege engines and catapults, the Mongols attempted to breach the city's walls, and, by February 5, had seized a significant portion of the defenses. Realizing that his forces had little chance of retaking the walls, Al-Musta'sim attempted to open negotiations with Hulagu, who rebuffed the Caliph. Around 3,000 of Baghdad's notables also tried to negotiate with Hulagu but were murdered.[26] Five days later, on February 10, the city surrendered, but the Mongols did not enter the city until the 13th, beginning a week of massacre and destruction. 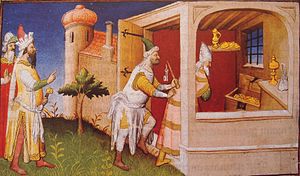 Many historical accounts detailed the cruelties of the Mongol conquerors.

Baghdad was a depopulated, ruined city for several centuries and only gradually recovered some of its former glory.

Comments on the destruction

"Iraq in 1258 was very different from present day Iraq. Its agriculture was supported by canal networks thousands of years old. Baghdad was one of the most brilliant intellectual centers in the world. The Mongol destruction of Baghdad was a psychological blow from which Islam never recovered. With the sack of Baghdad, the intellectual flowering of Islam was snuffed out. Imagining the Athens of Pericles and Aristotle obliterated by a nuclear weapon begins to suggest the enormity of the blow. The Mongols filled in the irrigation canals and left Iraq too depopulated to restore them." [29]

"They swept through the city like hungry falcons attacking a flight of doves, or like raging wolves attacking sheep, with loose reins and shameless faces, murdering and spreading terror...beds and cushions made of gold and encrusted with jewels were cut to pieces with knives and torn to shreds. Those hiding behind the veils of the great Harem were dragged...through the streets and alleys, each of them becoming a plaything...as the population died at the hands of the invaders." (Abdullah Wassaf as cited by David Morgan)

Some historians believe that the Mongol invasion destroyed much of the irrigation infrastructure that had sustained Mesopotamia for many millennia. Canals were cut as a military tactic and never repaired. So many people died or fled that neither the labor nor the organization were sufficient to maintain the canal system. It broke down or silted up. This theory was advanced by historian Svatopluk Souček in his 2000 book, A History of Inner Asia.

Other historians point to soil salination as the culprit in the decline in agriculture.[30][31]

Hulagu left 3,000 Mongol soldiers behind to rebuild Baghdad. Ata-Malik Juvayni was appointed governor of Baghdad, Lower Mesopotamia, and Khuzistan. The Mongol Hulagu's Nestorian Christian wife, Dokuz Khatun successfully interceded to spare the lives of Baghdad's Christian inhabitants.[32][33] Hulagu offered the royal palace to the Nestorian Catholicos Mar Makikha, and ordered a cathedral to be built for him.[34]

Initially, the fall of Baghdad came as a shock to the whole Muslim world, but the city became an economic center where international trade, the minting of coins and religious affairs flourished under the Ilkhans.[35] The chief Mongol darughachi was thereafter stationed in the city.[36]