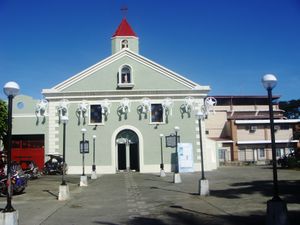 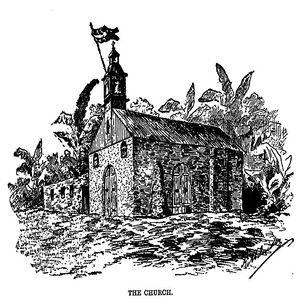 The church amidst the siege. 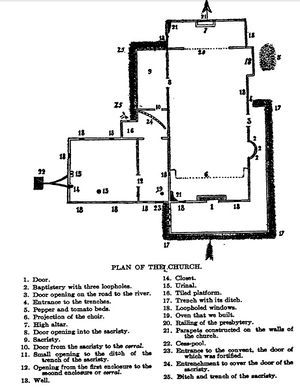 Map of church during the siege.

The Siege of Baler, from July 1, 1898 to June 2, 1899, was a battle of the Philippine Revolution and concurrently the Spanish–American War and the Philippine–American War. Filipino revolutionaries laid siege to a fortified church manned by colonial Spanish troops in the town of Baler, Philippines for 11 months, or 337 days.[2][3]

The battle is considered part of the Spanish–American War since the Filipinos were allied with the United States at the outset. That war ended in December 1898 with Spain's surrender and annexation of the Philippines to the United States. However, cut off from communications with their own government and military, the Spanish forces continued their defense against the Filipino forces until 1899.

Baler, Aurora located on the eastern coast of Luzon, is some 225 kilometers distant from the Philippine capital city of Manila. The Philippine Revolution against Spanish colonial rule started 1896. The Spanish garrisoned Baler, in Sept. 1897, with fifty cazadores under Lt. Jose Mota, to prevent Aguinaldo from receiving smuggled arms.[1]:10 Mota's forces were attacked on the night of 4 Oct. by Novicio's men, killing Lt. Mota and six other Spaniards, wounding several and capturing 30 Mauser rifles.[1]:11–13 The initial phase of the Philippine Revolution ended with a truce in 1897.

By 1898, with the resumption of the Philippine Revolution, Baler was still reachable only by ship or by traversing on foot through nearly impassable jungle trails across the Sierra Madres, that were often washed out by torrential tropical rains.[2] During this phase of the revolution, the Philippines was involved in the Spanish-American War, and the Filipino rebels allied themselves with the American forces. This alliance would end with the outbreak of the Philippine-American War in 1899.

Baler was garrisoned by a fifty-man detachment of the 2nd Expeditionary Battalion "Cazadores" of Philippines, under Captain Enrique de las Morenas y Fossí, as the Principe district political-military governor.[1]:16 On June 1, 1898, Morenas began work to dig a well, stock food supplies and ammunition and to fortify the church compound of San Luís de Tolosa in Baler's town square against a possible attack.[2] The church was the only stone building in the area.[3]

On June 26, it was noticed that the town residents were leaving.[1]:18 On the night of the 30th, 800 Filipino troops under Teodorico Luna (a relative of the painter Juan Luna) attacked, and the garrison fell back to the church.[1]:18 The town priest, Candido Gómez Carreño, also quartered himself in the church.[2]

The first few days of the siege saw several attempts by the Filipinos to get the Spanish to surrender by leaving letters, while they surrounded the church with trenches.[2]:29–30 On July 8 the Revolutionary Commander, then Cirilo Gómez Ortiz, offered a suspension of hostilities until nightfall, which was accepted.[2]:32 On July 18, Calixto Villacorta[3] took command of the Filipinos. He also sent a warning letter, which was rebuffed.[2]

The Spanish had to endure confinement in a small, hot, humid space. As the siege progressed, their food supply began to diminish through usage and spoilage. Enemy rifle fire did cause casualties but diseases such as beriberi, dysentery, and fevers did more damage.[1]:24 The first Spaniard to die was Gómez Carreño.[1]:22–23 In September, Lt. Alonso, and then in November, Captain Las Morenas succumbed to beriberi.[1]:23 Command fell to Lt. Saturnino Martín Cerezo when Las Morenas died in December.[2][3]

More than once the Spanish made forays to burn nearby houses to deprive the Filipinos of much needed cover.[2]:31 The Filipinos attempted to smoke them out by setting fires beside the church wall but this was repulsed and their timber captured.

At the start of the siege, the Spanish had provisions of flour, rice, beans, chickpeas, bacon, canned Australian beef, sardines, wine, sugar, and coffee - but no salt.[2]:54, 75 Supplementing their food supplies, the Spanish foraged for pumpkins, pumpkin leaves, oranges, plantain shoots, various herbs, and planted a garden of peppers, tomatoes and pumpkins.[2]:66–68

By mid-November, having failed to dislodge the Spanish defenders, Villacorta, under a flag of truce, left newspapers on the church steps that told of Spain's planned departure from the Philippines and that the Spanish-American conflict was over. Martín considered this a ruse. Next Villacorta brought in Spanish civilians and ultimately a uniformed Spanish officer left behind to wrap up Spain's affairs on the island, to no avail.[2]

By 22 Nov. 1898, 145 days had elapsed since the siege began, during which 14 Spanish soldiers died of disease.[1]:23 Of the thirty-eight remaining troops, only twenty-three were effective, with the rest being sick. The Filipinos also had suffered casualties, mostly from Mauser rifle fire the Spanish were able to inflict on them from their protected firing positions. Gómez Ortiz was one of these.[2]

The New Year brought more Spanish emissaries to Baler but again Martín Cerezo turned them away.[1]:49 At the end of February, the Spanish killed three water buffaloes, eating the meat before it spoiled, and using the leather for footwear.[2]:87–88

In April, the Americans intervened when Commander Charles S. Sperry, commanding the USS Yorktown, attempted to rescue the Spanish.[1]:43 By this time, the Philippines had been at war with the United States since February.[3] On a reconnaisance mission, five Americans were killed, while Lt. Gilmore, and nine others, were captured, and held prisoner by the Filipinos until rescued in December.[4]:178–179, 382–383

When their food ran out on 24 April, the Spanish resorted to eating stray dogs, cats, reptiles, snails and crows.[2]:102[3]

On 8 May, Filipino artillery shelling hit an improvised cell that held three Spaniards who had attempted to desert earlier in the siege. One of them, Alcaide Bayona, ran out and joined the Filipinos. This was a blow to the Spanish as the deserter had important intelligence to share about their dire straits, and helped fire the cannon on the church to good effect.[2]:105–107

On May 28, 1899, there was yet another attempt to get Martín Cerezo to surrender. Again, another Spanish officer, Lieutenant-Colonel Cristóbal Aguilar y Castaneda, appeared under a flag of truce and was turned away.[1]:109 He had brought recent Spanish newspapers, which Cerezo initially dismissed as bogus, until Martín read an article concerning a close friend's posting, plans of which only he knew, convincing him the newspapers were genuine and that indeed Spain had lost the war.[1]:110–111 On June 2, 1899, Martín surrendered to the Filipinos.[1]:111

General Emilio Aguinaldo, president of the Philippine Revolutionary Government - [First Philippine Republic], decreed that they were to be considered "Not as prisoners of war but as friends". He further stated that "They realized an epic as glorious as the legendary valour of the son of El Cid and of Pelayo".[3]

Three months later, on September 1, the survivors, including Martón Cerezo, arrived in Barcelona where they were received and honored as heroes.[2][3] Martin-Cerezo later published a memoir, “El Sitio de Baler”, where he gave his reasons for holding out:

"It would be somewhat difficult for me to explain, principally, I believe through mistrust and obstinacy. Then also on account of a certain kind of auto-suggestion that we ought not for any reason surrender because of national enthusiasm, without doubt influenced by the attractive illusion of glory and on account of the suffering and treasury of sacrifice and heroism and that by surrender, we would be putting an unworthy end to it all." 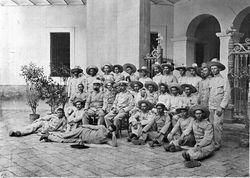 The survivors of Baler on their arrival in Barcelona.

The two Franciscan priests, Félix Minaya and Juan López, plus the Yorktown seaman George Arthur Venville, were kept as prisoners by Novicio, until the priests were rescued by the Americans on 3 June 1900, having re-garrisoned Baler earlier that year.[1]:239 Venville however was led to his death by the hands of Ilongots, before the American arrival.[1]:278 Furthermore, Novicio was put on trial for ordering the Yorktown sailor Ora B. McDonald buried alive after the ambush.[1]:252 Found guilty, Novicio faced a life sentence of hard labor in Bilibid Prison.[1]:270

Las Morenas was posthumously promoted to Major and awarded the 'Lauerate Cross of San Fernando', Spain’s highest military medal. His widow received a pension of 5,000 pesetas or pesos. Martin-Cerezo was promoted to Major with an annual pension of 1,000 pesetas. He also was decorated with the 'Royal Cross' as well as the Military Order of San Fernando and went on to become a Major General. He died in 1948. Lt. Zayas received a posthumous promotion. The enlisted men received the 'Silver Cross of Military Merit' and each of them received a monthly pension of 60 pesetas.[2]

Of the fifty men who entered the church, around thirty survived the 11-month siege. Fourteen men died from disease. Only two men died from wounds. There were four deserters from the garrison. Two men were imprisoned for helping in the desertion of another (Alcaide), and executed on orders of Martin Cerezo on June 1, 1899, the day before the surrender.[2]

The feat of the Spanish so inspired the American General Frederick Funston that he had Martin-Cerezo's memoir translated and gave copies to all his officers. It was published as Under the Red and Gold: Being Notes and Recollections of the Siege of Baler.[2]

The survivors were known as "The Last Ones of the Philippines" (Spanish: Los últimos de Filipinas; Filipino: Ang Pínakahulí Mulà sa Pilipinas). A century after their return, the modern-day Spanish government paid homage to them.[5] 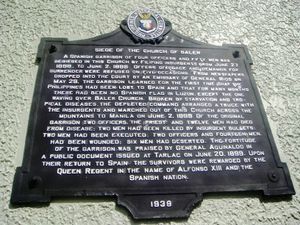 The Siege of Baler is portrayed in the 1945 Spanish film Los últimos de Filipinas.[6] and in the 2008 Filipino film Baler.[7]