From Infogalactic: the planetary knowledge core
(Redirected from Siege of Corfu (1716))
Jump to: navigation, search

The Seventh Ottoman–Venetian War was fought between the Republic of Venice and the Ottoman Empire between 1714 and 1718. It was the last conflict between the two powers, and ended with an Ottoman victory and the loss of Venice's major possession in the Greek peninsula, the Peloponnese (Morea). Venice was saved from a greater defeat by the intervention of Austria in 1716. The Austrian victories led to the signing of the Treaty of Passarowitz in 1718, which ended the war.

This war was also called the Second Morean War,[2] the Small War or, in Croatia, the War of Sinj.[3]

For more details on this topic, see Morean War.

Following the Ottoman Empire's defeat in the Second Siege of Vienna in 1683, the Holy League of Linz gathered most European states (except for France, England and the Netherlands) in a common front against the Ottomans. In the resulting Great Turkish War (1684–1699) the Ottoman Empire suffered a number of defeats such as the battles of Mohács and Zenta, and in the Treaty of Karlowitz (1699), was forced to cede the bulk of Hungary to the Habsburg Monarchy, Podolia to Poland-Lithuania, while Azov was taken by the Russian Empire.[4] Further south, the Republic of Venice had launched its own attack on the Ottoman Empire, seeking revenge for successive conquests of its overseas empire by the Turks, most recently (1669) the loss of Crete. Venetian troops, under the command of the able general Francesco Morosini (who became Doge of Venice in 1688), were able early in the conflict to seize the island of Cephalonia (Santa Maura) in 1684, the Peloponnese (Morea) peninsula (1685–1687) and parts of Continental Greece, although attempts to conquer Chalkis (Negroponte), recover Crete and hold on to Chios failed. In the Treaty of Karlowitz, Venice gained recognition of its control over Cephalonia and the Morea, and restored the situation in the Aegean to its pre-war status quo, leaving only the island of Tinos in Venetian hands.[5][6][7]

The Ottomans were from the outset determined to reverse these losses, especially the Morea, from which a large part of the Valide Sultan's (the Ottoman queen-mother) income had come. Already in 1702, there were tensions between the two powers and rumours of war because of the Venetian confiscation of an Ottoman merchant vessel; troops and supplies were moved to the Ottoman provinces adjoining the Venetian "Kingdom of the Morea". The Venetian position there was weak, with only a few thousand troops in the whole peninsula, plagued by supply, disciplinary and morale problems. Nevertheless, peace was maintained between the two powers for twelve more years.[8] In the meantime, the Ottomans began a reform of their navy, while Venice found itself increasingly isolated diplomatically from the other European powers: the Holy League had fractured after its victory, and the War of the Spanish Succession (1701–1714) and the Great Northern War (1700–1721) preoccupied the attention of most European states.[9] The Ottomans took advantage of the favourable international situation to settle their scores with Russia, inflicting on them a heavy defeat in the Russo-Turkish War of 1710–1711. This victory encouraged the Ottoman leadership and after the Russo-Turkish Treaty of Adrianople in June 1713, the way was open for an attack on Venice.[10][11]

A pretext was easy to find: the seizure of an Ottoman ship carrying the treasures of the former Grand Vizier, Damad Hasan Pasha, as well as the Venetians' granting of sanctuary to Danilo I, the Prince-Bishop of Montenegro, after he had launched an abortive revolt against the Turks. As a result, on 9 December 1714, the Ottoman Empire declared war on Venice.[12][13]

The Ottoman conquest of the Morea

During the early months of 1715, they assembled an army of ca. 70,000 men in Macedonia under the Grand Vizier Silahdar Damat Ali Pasha. The Grand Vizier marched south, reaching the main camp in Thebes in early June. In the meantime, the Ottoman Fleet, numbering 80 warships under Canum Hoca, had captured the last Venetian possessions in the Aegean, the islands of Tinos and Aigina.[14]

The Venetians, who did not have any standing army and relied mainly on mercenaries, could only muster 8,000 men and 42 mostly small ships, under the command of the Captain General Daniel Delfin.[15] This force was not only insufficient to meet the Ottoman army in the field, but also inadequate to man the many fortifications that the Venetians had built or enhanced during the past decades. In addition, the local Greek population disliked Venetian rule, something Damad Ali exploited, by ensuring that his troops respected their safety and property. Thus he was able to count on the good will of the Greeks, who provided his troops with ample provisions,[16] while the Venetians, who hoped to recruit a militia amongst the native population, were left isolated in their forts.[citation needed]

On 25 June, the Ottoman army crossed the Isthmus of Corinth and entered the Peloponnese. The citadel of Acrocorinth, which controlled the passage to the peninsula, surrendered after a brief siege, on terms of safe passage for the garrison and the civilians. However, some Janissaries, eager for plunder, disobeyed Damat Ali's orders and entered the citadel. A large part of the garrison, including the provedditore Giacomo Minoto, and most of the civilians were massacred or sold to slavery. Only 180 Venetians were saved and transported to Corfu.[17] These tragic events later inspired Lord Byron's poem The Siege of Corinth.[citation needed]

After Corinth, the Ottomans advanced against Nafplion (Napoli di Romagna), the main base of Venetian power in the Morea. Nafplion was well-protected by several strong forts and had a garrison of 2,000 men. However, on 20 July, after only nine days of siege, the Ottomans exploded a mine under the bastions of Palamidi and successfully stormed the fort. The Venetian defenders panicked and retreated, leading to a general collapse of the defence.[18]

The Ottomans then advanced to the southwest, where the forts of Navarino and Koroni were abandoned by the Venetians, who gathered their remaining forces at Methoni (Modon). However, being denied effective support from the sea by Delfin's reluctance to endanger his fleet by engaging the Ottoman navy, the fort capitulated.[19] The remaining Venetian strongholds, including the last remaining outposts on Crete (Spinalonga and Souda), likewise capitulated in exchange for safe departure. Within a hundred days, the entire Peloponnese had been re-taken by the Ottomans.[16]

The Siege of Corfu 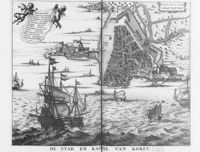 City plan of Corfu in 1688, depicting its fortifications

After their success in the Morea, the Ottomans moved against the Venetian-held Ionian Islands. They occupied the island of Lefkada (Santa Maura), which the Venetians had taken in 1684, and the fort of Butrinto opposite the city of Corfu. On 8 July 1716, an Ottoman army of 33,000 men landed on Corfu, the most important of the Ionian islands.[20] Despite an indecisive naval battle on the same day, the Ottoman land army continued its disembarkment and advanced towards the city of Corfu. On 19 July, after capturing the outlying forts of Mantouki, Garitsa, Avrami and of the Saviour, the siege began.[21] The defence was led by Count Johann Matthias von der Schulenburg, who had roughly 8,000 men at his command. The extensive fortifications and the determination of the defenders withstood several assaults. After a great storm on 9 August—which the defenders attributed to the intervention of Corfu's patron saint, Saint Spyridon—caused significant casualties among the besiegers, the siege was broken off on 11 August and the last Ottoman forces withdrew on 20 August.[21]

Austrian intervention and conclusion of the war

In the summer of 1715, the pasha of Bosnia marched against the Venetian possessions in Dalmatia, with an army that reputedly numbered 40,000 men. The Ottomans were defeated in a siege of Sinj, but the Ottoman threat to Dalmatia played a role in Austria's decision to intervene.[citation needed]

With Pope Clement XI providing financial support and France guaranteeing Austrian possessions in Italy, Austria felt ready to intervene. On 13 April 1716, Emperor Charles VI renewed his alliance with Venice, whereupon the Ottomans declared war on Austria. The Austrian threat forced the Ottomans to direct their forces away from the remaining Venetian possessions, but the Serenissima was too weak to mount any large-scale counter-offensive. Only its navy resumed a more aggressive stance, with naval actions between the Venetian and Ottoman fleets taking place in the Aegean Sea, such as the Battle of Imbros and the Battle of Matapan a month later, but these were generally indecisive and did not affect the outcome of the war.[2] The only permanent Venetian success was the capture of the fortresses of Preveza and Arta in 1717. With the Austrian victories at the Battle of Petrovaradin and the Siege of Belgrade, however, the Ottomans were forced to sign the Treaty of Passarowitz. Although the Ottomans lost significant territories to Austria, they maintained their conquests against Venice in the Peloponnese and Crete, with the exception of Preveza (fell in 1717 to Venetians) and a few forts in Herzegovina (Imotski was taken in 1717).[22]