The Siege of Güns or Siege of Kőszeg (Turkish: Güns Kuşatması) was a siege of Kőszeg (German: Güns)[Note 1] in the Kingdom of Hungary within the Habsburg Empire, that took place in 1532. In the siege, the defending forces of the Austrian Habsburg Monarchy under the leadership of Croatian Captain Nikola Jurišić (Hungarian: Miklós Jurisics), defended the small border fort of Kőszeg with only 700–800 Croatian soldiers, with no cannons and few guns.[1] The defenders prevented the advance of the Ottoman army of 120,000–200,000 toward Vienna, under the leadership of Sultan Suleiman the Magnificent (Ottoman Turkish: سليمان‎ Süleymān) and Pargalı Ibrahim Pasha.[1][5]

The exact outcome is unknown, since it has two versions which differ depending on the source. In the first version Nikola Jurišić rejected the offer to surrender on favourable terms, and in the second version, the city was offered terms for a nominal surrender. Suleiman, having been delayed nearly four weeks, withdrew at the arrival of the August rains,[5] and did not continue towards Vienna as he had intended, but turned homeward.[3]

Suleiman secured his possession in Hungary by conquering several other forts,[6] but after the Ottoman withdrawal, Habsburg Emperor Ferdinand I reoccupied some of the devastated territory. Following this, Suleiman and Ferdinand concluded a 1533 treaty in Constantinople that confirmed the right of John Zápolya as a king of all Hungary, but recognised Ferdinand's possession of some of the reoccupied territory.[7] 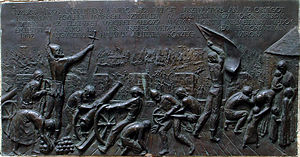 Monument of the Siege of Kőszeg, located in the bourg of Kőszeg

On 29 August 1526, at the Battle of Mohács, the Christian forces led by King Louis II were defeated by Ottoman forces led by Sultan Suleiman the Magnificent.[8] Louis was killed in the battle, which resulted in the end of the independent Kingdom of Hungary as he died without an heir. Both the Kingdoms of Hungary and Croatia became disputed territories with claims from both the Habsburg and Ottoman empires. Habsburg Emperor Ferdinand I, who was a brother of Holy Roman Emperor Charles V, married the sister of Louis II[9] and was elected King by the nobles of both Hungary and Croatia.[10][Note 2]

The throne of Hungary became the subject of a dynastic dispute between Ferdinand and John Zápolya from Transylvania, since Suleiman had promised to make Zápolya the ruler of all Hungary.[12] During Hungarian campaign of 1527–1528, Ferdinand captured Buda from John Zápolya in 1527, only to relinquish his hold on it in 1529 when an Ottoman counter-attack stripped Ferdinand of all his territorial gains during 1527 and 1528.[9] The siege of Vienna in 1529 was the first attempt by Suleiman the Magnificent to capture the Austrian capital. This siege signalled the pinnacle of Ottoman power and the maximum extent of Ottoman expansion in central Europe.[9]

Following Suleiman's unsuccessful Siege of Vienna in 1529, Ferdinand launched a counter-attack in 1530 to regain the initiative and avenge the destruction brought by Suleiman's 120,000 strong army. This campaign is usually considered as the start of the Little War, the period of a series conflicts between the Habsburgs and the Ottoman Empire. An assault of Buda was driven off by John Zápolya, the vassal King of Hungary, but Ferdinand was successful elsewhere, capturing Gran (Esztergom) and other forts along the Danube river, a vital strategic frontier.[5]

See also: List of campaigns of Suleiman the Magnificent

During the early period of the Little War in Hungary, Suleiman, as a response to Ferdinand's counter-attack in 1530, and as a part of his fifth imperial campaign[13] (Ottoman Turkish: سفر همايون‎, Sefer-i humāyūn)[Note 3] in 1532, led a massive army of over 120,000 troops to besiege Vienna again. Due to Suleiman's rapid advances, Ferdinand feared the Christian forces would not be assembled in time to meet him.[15] On 12 July, Suleiman wrote to Ferdinand from Osijek (German: Esseg) in Slavonia, to assure him of the Ottoman advance.[15] According to the letter, Suleiman's fifth campaign was primarily directed against Charles V, and not personally against Ferdinand.[16] After Suleiman crossed the river Drava at Osijek, instead of taking the usual route for Vienna, he turned westwards into Ferdinand's held Hungarian territory.[5] According to historian Andrew Wheatcroft, on the route for Vienna, the Ottoman army had briefly invested and captured seventeen fortified towns or castles.[1] Ferdinand withdrew his army, leaving only 700 men with no cannons and a few guns to defend Kőszeg.[5]

However, in order to make decisive gains, the Ottomans had to take the city quickly, as a large Imperial army, raised in Germany, reinforced by Spanish troops and led by the Emperor Charles V himself was approaching in support of Ferdinand.[17] 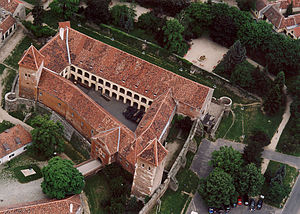 Located south of Sopron, the small town of Kőszeg was only a few miles from the Austrian border.[1] It was held by a task force commanded by the Croatian soldier and diplomat Nikola Jurišić.[18] Kőszeg was not considered a place of importance.[18] It was an insubstantial obstacle and many stronger places had yielded without a fight.[1] The Grand Vizier of the Ottomans, Ibrahim Pasha, did not realize how poorly defended Kőszeg was. After taking a few minor places, Suleiman came to join Ibrahim Pasha shortly afterwards, when the siege had already started.[5]

The Ottomans met stiff resistance at Kőszeg.[18] Suleiman had hoped that the imperial army would come to relieve Kőszeg, affording him an opportunity for a larger engagement.[19] However, during the Ottoman attacks on Kőszeg, the imperial army still formed up in Regensburg.[20] The Ottomans continued with one attack after another; artillery fire brought down parts of the walls, but brought no surrender.[18][Note 4] The Ottomans' mines were sapped by countermines.[18] The layout of Kőszeg's walls made mining a feasible strategy, but even though several mines succeeded in blowing holes in the fortifications, the defenders held out.[5] For more than twenty-five days, without any artillery, Captain Nikola Jurišić and his garrison of 800 Croats held out against nineteen full-scale assaults and an incessant bombardment by the Ottomans.[1]

The outcome has two versions. In the first version, Nikola Jurišić rejected the offer to surrender on favourable terms, and the Ottomans retreated.[1][4][22] In the second version, the city was offered terms for a nominal surrender. The only Ottomans who would be allowed to enter the castle would be a token force who would raise the Ottoman flag.[5] In either case, Suleiman withdrew at the arrival of the August rains,[5] and returned homeward instead of continuing towards Vienna as previously planned.[3] He had been delayed nearly four weeks, and during this time a powerful army had been collected in Vienna, which Suleiman had not the intention to face.[3] According to historian Paolo Giovio, Charles arrived with an imperial army at Vienna on 23 September, too late for fighting the Ottomans since Suleiman already withdrew.[23] By their defense of Kőszeg, Nikola Jurišić and his men had saved Vienna from a siege.[3][Note 5] 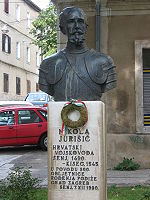 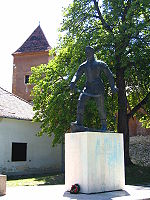 Statue of Nikola Jurišić in Senj, Croatia (left) and in Kőszeg, Hungary (right)

Although he was stopped at Kőszeg and failed to conquer Vienna, Suleiman additionally secured his possession in Hungary by conquering several forts, since Ferdinand and Charles evaded an open field battle.[6] Immediately after the Ottoman withdrawal, Ferdinand reoccupied devastated territory in Austria and Hungary.[24] Nevertheless, Suleiman concluded a peace treaty with Ferdinand in 1533, in Constantinople.[7] The treaty confirmed the right of John Zápolya as a king of all Hungary, but recognised Ferdinand's possession of that part of the country that enjoyed the status quo.[7]

This treaty did not satisfy Zápolya or Ferdinand, whose armies began to skirmish along the borders. After Zápolya's death in 1540, Suleiman annexed Hungary to the Ottoman realm.[25] Although from 1529 to 1566 the borders of the Ottoman Empire moved further west, none of the campaigns after 1529 achieved the decisive victory that would secure the new Ottoman possessions.[26]