The Siege of Hulst of 1596 was a Spanish victory led by Archduke Albert that took place between mid-July and August 18, 1596, at the city of Hulst, Province of Zeeland, Low Countries (present-day the Netherlands), during the Eighty Years' War, the Anglo-Spanish War (1585–1604).[1][2][6][11] After a short siege, during which Maurice of Orange launched a failed attempt to relieve the city – the garrison of Dutch and English troops fell into Spanish hands on August 18, 1596.[10][12]

From 1590 until 1594 the Dutch under the leadership of Maurice of Orange had achieved great military successes and expanded its territory capturing numerous strategic towns and cities.[13] In 1595 Maurice commenced a campaign with the objective to expel the Spanish troops from all cities above the Rhine in the east of the Netherlands. However, at the Siege of Groenlo Cristóbal de Mondragón arrived with a relief force, forcing Maurice to break up the siege.[14] The following year began badly for the Dutch and English as the important port Calais fell to Spain after the French garrison surrendered.[15] The Spanish under Albert of Austria returned to Flanders and conducted a counter offensive and was solicited by the burghers of Bruges to lay siege to Ostend with an offer of 1,200,000 guilders towards the expenses.[8] This however was not to be as Maurice had heavily reinforced the garrison with fresh troops and supplies.[7]

Albert's force marched from Antwerp past the Scheldt and into Brabant with nearly 15,000 infantry and cavalry under their new commander Sieur de Rosne a French refugee who had replaced Francisco Verdugo and Mondragón both of whom had died.[3] Albert was indecisive about whether to besiege Bergen op Zoom or Breda.[7] Nevertheless, Albert had in fact worked up a ruse and to the Dutch there was confusion about where he would strike.[16] Maurice's small depleted army of 5,000 went to Brabant – the vast majority of the veteran English and Scottish regiments, 4,000 in all under Sir Francis Vere were at Cadiz which they were sacking.[17][18] The Dutch public however funded enough money for some 2,000 soldiers. With Maurice's army thinly stretched Albert realised he could strike at Hulst without hindrance.[6]

Albert marched towards Hulst avoiding any contact with Maurice's army and soon invested it.[19] Hulst a small but strong town commanding the Waasland of Flanders, had been captured in 1591 by an Anglo Dutch force under Maurice.[20] The garrison had built several sconces, and defences were made more complete by a system of sluices through which the country around could be laid under water.[7] The moat had been deepened but the walls were only partially repaired.[10] 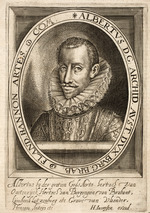 Albert's successful ruse however had much of Holland in panic but Maurice's army soon learned of Albert's intention to take Hulst and marched towards the town. The Dutch were hoping for a long siege and had enough supplies for seven months and under the veteran Georg Eberhard the Count von Solms were to hold it at all costs.[7]

In spite of the resistance offered by the besieged who made several highly successful sallies – the archduke succeeded in gaining possession of the principal dyke and a strong fort called the Moer which enabled him to dig closer to the walls.[12] The losses in the archdukes camp however were high and after only six weeks his casualties had topped nearly 600 with thousands more sick or dead to disease.[8] In addition, de Rosne the Spanish army commander was killed during a sally by the garrison.[3] The fire from the Spanish artillery was furious; after sending nearly 1,500 cannonballs they were able to make a large breach.[21] The garrison expected an assault but instead Albert summoned the garrison commanded by the Count of Solms to surrender or expect an immediate assault.[7] This was refused but the besiegers instead of commencing the assault began to work a mine under the wall.[16] This soon unlocked the will of the minds of the garrison as well as the inhabitants and with nearly 700 losses mostly to disease, this fear of an impending assault to ensure their destruction resulted in a panic.[7][10]

Maurice along with William Louis had approached Hulst but Count Von Solms under pressure from the citizens had already asked to surrender the city.[12] Maurice did, however, at first attempt to relieve the city, but failed owing to the strong defences, and soon withdrew.[6] Even the Spanish were surprised that the city wanted to surrender, and on August 18, 1596 Albert readily granted the most favourable terms to the 3,000 strong garrison.[19]

For the archduke however the victory was costly – sixty officers and 5000 men had perished most of which was from disease.[10][22] Hulst had been badly battered and had nearly 3,500 cannonballs hurled in and at the place.[21]

The Zealanders were so dissatisfied with the conduct of the Count of Solms that they dismissed him from the command of their troops.[17] The success made sure that Albert had gained the respect of King Philip II and as a result had broken a chain of defeats that they had sustained earlier in the decade, both in France and the Netherlands.[10][19] The city would remain in Spanish hands until 4 November 1645 when the place was captured by Prince of Orange.[23]

With this defeat the Republic then feared a Spanish siege of the cities of Axel and Biervliet. Albert, however, after his severe losses had not enough troops to continue his march and withdrew to Flanders – the Republic heard the news via the interception of a letter to Philip.[16] The Republic were relieved, and thus Maurice now had the advantage of the return of English troops back from their success at Cadiz.[18] He was able to launch a successful offensive the following year the first of which was the defeat of the Spanish Tercios at the Battle of Turnhout.[17][6]