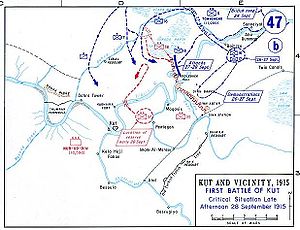 The 6th (Poona) Division of the Indian Army, under Major-General Charles Townshend, had fallen back to the town of Kut after retreating from Ctesiphon. The British Empire forces arrived at Kut around 3 December 1915. They had suffered significant losses and were down to around 11,000 soldiers (plus cavalry). General Townshend chose to stay and hold the position at Kut instead of continuing the march downriver towards Basra. Kut offered a good defensive position because it was contained within a long loop of the river. The problem was how to get supplies, since Kut was a long way from Basra.

The pursuing Ottoman forces arrived on 7 December 1915. Once it became clear the Ottomans had enough forces to lay siege to Kut, Townshend ordered his cavalry to escape south, which it did, led by Lieut. Colonel Gerard Leachman DSO. The Ottoman forces numbered around 11,000 men and increasing steadily with additional reinforcements arriving constantly, were commanded by the respected but elderly German general and military historian Baron von der Goltz. Goltz knew the Ottoman army well, as he had spent 12 years working on modernizing the Ottoman army from 1883 to 1895. After three attacks in December, Goltz directed the building of siege fortifications facing Kut. Like Caesar at the Alesia,[original research?] he prepared for an attack from Basra, using the Tigris River, by building defensive positions further down the river designed to cut off a river-borne relief.

After a month of siege, Townshend wanted to break out and withdraw southwards but his commander, General Sir John Nixon saw value in tying down the Ottoman forces in a siege. Nixon ordered transports from London, but none had arrived. The War Office was in the process of reorganizing military command; previously the orders had come from the Viceroy and India Office.

However, when Townshend—inaccurately—reported that only one month of food remained, a rescue force was hastily raised. It is not clear why Townshend reported he only had enough food for one month when he actually had food for more than four months (although at a reduced level), but Townshend would not attempt an infantry retreat unprotected through hostile tribal lands without river transport. Nixon had ordered this with reinforcements, commanded by his son, but by December they were still only in the Suez Canal. The confusing communications would prove a critical delay.

The first relief expedition comprised some 19,000 men under Lieutenant-General Aylmer and it headed up the river from Ali Gharbi in January 1916.

The first attempt to relieve Kut (the Battle of Sheikh Sa'ad) came on 6 January. Aylmer's advance force was a division or two, under Major-General George Younghusband. Part of the cause of delay was the debate in Cabinet over whether one division would be an adequate force, or whether two divisions should be sent. Deliberations were painfully slow. The ageing General Maurice insisted on being informed at every turn as the evidence came into the Committee of Imperial Defence; which was further complicated by a restructuring involving the setup of a new sub-committee system and transfer of military responsibilities. At least three urgent memoranda were sent from General Nixon demanding transports to evacuate Townshend's division. By Christmas his health had broken down, and he requested a return to Bombay.

Nixon's replacements with additional staff as a mandatory requirement moved forward from Ali Al Gharbi towards Sheikh Sa'ad along both banks of the Tigris. Younghusband's column made contact with the Ottomans on the morning of 6 January 3.5 miles east of Sheikh Sa'ad. British efforts to defeat the Ottomans were unsuccessful.[3]

The following day, on 7 January, Aylmer arrived with the main body of his forces and ordered a general attack. Younghusband led the attack on the left bank and Major-General Kemball took the right. After heavy fighting all day, Kemball's troops had overrun Ottoman trenches on the right bank, taking prisoners and capturing two guns. However, the Ottoman left bank held firm and they carried out supporting maneuvres from the north.

After little change on 8 January, renewed British attacks on 9 January resulted in the Ottomans retiring from Sheikh Sa'ad. Over the following two days the Ottomans were followed by Aylmer's force but heavy rains made the roads virtually impassable.[3]

The Ottomans retreated for about ten miles (16 km) from Sheikh Sa'ad to a tributary of the Tigris on the left bank known by the Arabic toponym simply as the Wadi (meaning "the river valley"). The Ottomans made their camp beyond the Wadi and on the other side of the Tigris opposite the Wadi.

On 13 January, Aylmer attacked the Ottoman Wadi position on the left bank with all of his forces. After putting up a stiff resistance the Ottomans retreated five miles (8 km) to the west and they were followed by Aylmer's troops.

The Ottomans then made their camp upstream of the Wadi at the Hanna defile, a narrow strip of dry land between the Tigris and the Suwaikiya Marshes. British losses at the Battle of Hanna amounted to 2,700 killed and wounded, which was disastrous for the garrison in Kut.[4]

At this point, Khalil Pasha (the Ottoman commander of the whole region) came to the battle, bringing with him a further 20,000 to 30,000 reinforcements.

Following the defeat of Aylmer's expedition, General Nixon was replaced as supreme commander by Percy Lake. More forces were sent to bolster Aylmer's troops. He tried again, attacking the Dujaila redoubt on 8 March. This attack failed, at a cost of 4,000 men. General Aylmer was dismissed and replaced with General George Gorringe on 12 March.

The relief attempt by Gorringe is usually termed the First Battle of Kut. The British Empire's forces numbered about 30,000 soldiers, roughly equal to the Ottomans. The battle began on 5 April and the British soon captured Fallahiyeh, but with heavy losses, Beit Asia was taken on 17 April. The final effort was against Sannaiyat on 22 April. The Allies were unable to take Sannaiyat and suffered some 1,200 casualties in the process.

In April 1916 No. 30 Squadron of the Royal Flying Corps carried out the first air supply operation in history. Food and ammunition were dropped to the defenders of Kut.

All the relief efforts had failed, at a cost of around 23,000 Allied killed or wounded. Ottoman casualties are believed to have been around 10,000. The Ottomans also lost the aid of Baron von der Goltz. He died on 19 April, supposedly of typhoid. After Goltz's death, no German commander took his place in Mesopotamia for the rest of the war.

Surrender of the British army 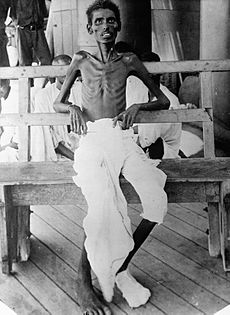 An Indian soldier after siege of Kut

British leaders attempted to buy their troops out. Aubrey Herbert and T. E. Lawrence were part of a team of officers sent to negotiate a secret deal with the Ottomans. The British offered £2 million and promised they would not fight the Ottomans again, in exchange for Townshend's troops. Enver Pasha ordered that this offer be rejected.[5]

The British also asked for help from the Russians. General Baratov, with his largely Cossack force of 20,000 was in Persia at the time. Following the request he advanced towards Baghdad in April 1916, but he turned back when news reached him of the surrender.[6]

General Townshend arranged a ceasefire on the 26th and, after failed negotiations, he simply surrendered on 29 April 1916 after a siege of 147 days. Around 13,000 Allied soldiers survived to be made prisoners. 70% of the British and 50% of the Indian troops died of disease or at the hands of their Ottoman guards during captivity. Townshend himself was taken to the island of Halki on the Sea of Marmara, to sit out the war in relative luxury. The author Norman Dixon, in his book On the Psychology of Military Incompetence, described Townshend as being 'amused' by the plight of the men he had deserted, as if he had pulled off some clever trick. Dixon says Townshend was unable to understand why his friends and comrades were ultimately censorious over his behaviour.[7]

In British Army battle honours, the siege of Kut is named as "Defence of Kut Al Amara".

James Morris, a British historian, described the loss of Kut as "the most abject capitulation in Britain’s military history." After this humiliating loss, General Lake and General Gorringe were removed from command. The new commander was General Maude, who trained and organized his army and then launched a successful campaign which captured Baghdad on 11 March 1917. With Baghdad captured, the British administration undertook vital reconstruction of the war-torn country and Kut was slowly rebuilt.[8]

Some of the Indian prisoners of war from Kut later came to join the Ottoman Indian Volunteer Corps under the influence of Deobandis of Tehrek e Reshmi Rumal and with the encouragement of the German High Command. These soldiers, along with those recruited from the prisoners from the European Battlefields fought alongside Ottoman forces on a number of fronts.[9] The Indians were led by Amba Prasad Sufi, who during the war was joined by Kedar Nath Sondhi, Rishikesh Letha and Amin Chaudhry. These Indian troops were involved in the capture of the frontier city of Karman and the detention of the British consul there, and they also successfully harassed Sir Percy Sykes' Persian campaign against the Baluchi and Persian tribal chiefs who were aided by the Germans.[10][11]