The siege of Lachish is the name given to the Assyrian siege and conquest of the town of Lachish in 701 BC. The siege is documented in several sources including the Hebrew Bible, Assyrian documents and in the Lachish relief, a well-preserved series of reliefs which once decorated the Assyrian king Sennacherib's palace at Nineveh.[1]

Several kingdoms in the Levant ceased to pay taxes for the Assyrian King, Sennacherib, as a result, he set out on a campaign to once again subjugate the rebelling Kingdoms, among them the Jewish King, Hezekiah. After defeating the rebels of Ekron in Philistia he set out to subjugate Judah and in his way to Jerusalem he came across Lachish, the second most important among the Jewish cities.

The battlefield was the walled city of Lachish, situated on a hill. The northern part of the hill is steeper than the southern side and due to that the gate is situated there. On top of the fact that the hill as of itself is quite high, the wall further makes the city hard to breach. Inside the city itself there was a castle with significant walls.

Forces of each side

The Assyrian Army was the most effective force of its time and was divided mostly into three different categories:

The Jewish military force was insignificant compared to the professional and massive Assyrian army and mostly included local militias and mercenaries. There were barely any cavalrymen and chariots in the Jewish army which mostly included infantry, either for close combat (spearmen) or long range combat (archers), they were also significantly less organized. 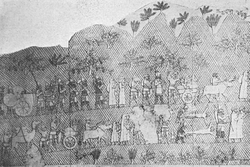 Judean captives being led away into slavery by the Assyrians after the siege of Lachish in 701 B.C. This relief is important for the knowledge of Judean dress. 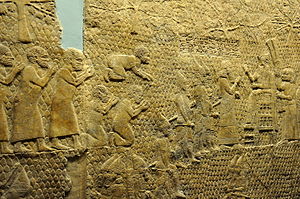 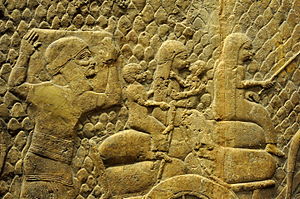 Judaean people being deported into exile after the capture of Lachish

The city was captured by the Assyrians, its inhabitants led into captivity and the leaders of Lachish tortured to death. The town was abandoned, but resettled after the return from Babylonia.

The British Museum has a superb set of relief carvings which depicted the siege in some detail. It shows the Assyrian soldiers firing arrows, and slingstones, and approaching the walls of Lachish using mudbrick ramps. The attackers shelter behind wicker shields, and deploy battering rams. The walls and towers of Lachish are shown crowded with defenders shooting arrows, throwing rocks and torches on the heads of the attackers.

The reliefs continues showing the looting of the city, and defenders are shown being thrown over the ramparts, impaled, having their throats cut and asking for mercy. A bird's eye plan of the city is shown with house interiors shown in section.

After he captured the second most important city in Judah, Sennacherib encamped there and then sent his Rabshakeh (Chief of the Princes) to capture Jerusalem.

Further sources for the conflict in general: