From Infogalactic: the planetary knowledge core
Jump to: navigation, search
This article is about the siege by the Ottomans in 1480. For other uses, see Siege of Rhodes.

In 1480 the small Knights Hospitaller garrison of Rhodes withstood an attack of the Ottoman Empire.

On 23 May 1480 an Ottoman fleet of 160 ships appeared before Rhodes, at the gulf of Trianda, along with an army of 70,000 men under the command of Gedik Ahmed Pasha or Mesih Pasha.[6] The Knights Hospitaller garrison was led by Grand Master Pierre d'Aubusson. The Knights were reinforced from France by 500 knights and 2,000 soldiers under d'Aubusson's brother Antoine.

The Ottomans' first strategic goal was to capture the Tower of St Nicholas, which was the knights' key point in the defence of the two harbours: the commercial, Mandraki, and the one to the east bay of Akandia. The Turkish artillery kept up an unbroken bombardment and on 9 June the infantry made a series of attacks. Grand Master d'Aubusson himself sped to the aid of the garrison and after a fierce struggle the enemy was repelled.

Shortly after came a second attack on the tower, this time on the eastern sector of the wall towards the bay of Akandia, which was the battle station of the "tongue" of Italy and was quite weak. During the bombardment from the Turkish artillery, the Knights and the people meanwhile dug a new moat on the inside of the wall at this point and constructed a new internal fortification. Once again the Knights reacted valiantly and decisively and after a bitter battle with many casualties on both sides, the danger was once more averted.

The last act of the drama was played out in the Jewish quarter of the city. At dawn on 27 July the Turks launched a vigorous offensive and their vanguard of around 2,500 Janissaries managed to take the tower of Italy and enter the city. A frenzied struggle ensued. The grand master, wounded in five places, directed the battle and fought with lance in hand. After three hours of fighting the enemy were decimated and the exhausted survivors began to withdraw. The Knights´ counter-attack caused the Turks to beat a disorderly retreat, dragging along with them the Vizier and commander-in-chief. The Hospitallers reached as far as his tent and took, along with other booty, the holy standard of Islam. On that day between three and four thousand Turks were slain.[7]

On August 17, 1480, the Ottoman fleet gave up their attempt to capture Rhodes. Sultan Mehmed II was furious and would have attacked the island again, but his death in 1481 put a stop to the attempt. The French knight Guillaume Caoursin, vice-chancellor of the Knights Hospitaller, fought in the siege of Rhodes and wrote its description in his Obsidionis Rhodiae Urbis Descriptio (an English translation exists as a part of Edward Gibbon's Crusades[8]). An earlier English translation was the work of John Caius the Elder (printed 1481-84). D'Aubusson's own report on the siege can be found in John Taaffe's history of the Holy, military, sovereign order of st. John of Jerusalem.[9]

In 1521-22 the Ottomans besieged Rhodes once again and captured the city and island. 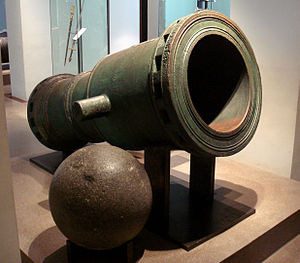 Bombard-Mortar of the Knights of Saint John of Jerusalem, Rhodes, 1480-1500. Founded at the request of Pierre d'Aubusson, the bombard was used for close defense of the walls (100-200 meters). It fired 260 kg granite balls. The bombard weighs 3,325 kg. Exhibited at the Musée de l'Armée, Paris.
File:Rhodos1493.png
A view of Rhodes 10 years later.