From Infogalactic: the planetary knowledge core
(Redirected from Siege of Sevastopol (1854–1855))
Jump to: navigation, search

Sevastopol is one of the classic sieges of all time.[9] The city of Sevastopol was the home of the Tsar's Black Sea Fleet, which threatened the Mediterranean. The Russian field army withdrew before the allies could encircle it. The siege was the culminating struggle for the strategic Russian port in 1854–1855 and was the final episode in the Crimean War.

During the Victorian Era, these battles were repeatedly memorialized. The Siege of Sevastopol was the subject of Crimean soldier Leo Tolstoy's Sebastopol Sketches and the subject of the first Russian feature film, Defence of Sevastopol. The Battle of Balaklava was made famous by Alfred, Lord Tennyson's poem "The Charge of the Light Brigade" and Robert Gibb's painting The Thin Red Line, as well as by a panorama of the siege painted by Franz Roubaud. Treating the wounded from these battles were celebrated English nurses Mary Seacole and Florence Nightingale.

The allies (French, Ottoman, and British) landed at Eupatoria on 14 September 1854.[10] The Battle of the Alma (20 September 1854), which is usually considered the first battle of the Crimean War (1853–1856), took place just south of the River Alma in the Crimea.[11] An Anglo-French force under Jacques Leroy de Saint Arnaud and FitzRoy Somerset, 1st Baron Raglan defeated General Alexander Sergeyevich Menshikov's Russian army, which lost around 6,000 troops.[12]

Moving from their base at Balaklava at the start of October, French and British engineers began to direct the building of siege lines along the Chersonese uplands to the south of Sevastopol.[13] The troops prepared redoubts, gun batteries, and trenches.[14]

By mid-October 1854, the Allies had some 120 guns ready to fire on Sevastopol; the Russians had about three times as many.[17]

On 17 October 1854 (old style date, 29 October new style)[lower-alpha 1] the artillery battle began.[18] The Russian artillery first destroyed a French magazine, silencing their guns. British fire then set off the magazine in the Malakoff redoubt, killing Admiral Kornilov, silencing most of the Russian guns there, and leaving a gap in the city's defences. However, the British and French withheld their planned infantry attack, and a possible opportunity for an early end to the siege was missed.

At the same time, to support the Allied land forces, the Allied fleet pounded the Russian defences and shore batteries. Six screw-driven ships of the line and 21 wooden sail were involved in the sea bombardment (11 British, 14 French, and two Ottoman Turkish). After a bombardment that lasted over six hours, the Allied fleet inflicted little damage on the Russian defences and coastal artillery batteries while suffering 340 casualties among the fleet. Two of the British warships were so badly damaged that they were towed to the arsenal in Constantinople for repairs and remained out of action for the remainder of the siege, while most of the other warships also suffered serious damage due to many direct hits from the Russian coastal artillery. The bombardment resumed the following day, but the Russians had worked through the night and repaired the damage. This pattern would be repeated throughout the siege.

During October and November 1854, the battles of Balaclava[19] and Inkerman[20] took place beyond the siege lines. Balaclava gave the Russians a morale boost and convinced them that the allied lines were thinly spread out and undermanned.[21] But after their defeat at Inkerman,[22] the Russians saw that the siege of Sevastopol would not be lifted by a battle in the field, so instead they moved troops into the city to aid the defenders. Toward the end of November, a winter storm ruined the Allies' camps and supply lines. Men and horses sickened and starved in the poor conditions.

While Totleben extended the fortifications around the Redan bastion and the Malakoff redoubt, British chief engineer John Fox Burgoyne sought to take the Malakoff, which he saw as the key to Sevastopol. Siege works were begun to bring the Allied troops nearer to the Malakoff; in response, Totleben dug rifle pits from which Russian troops could snipe at the besiegers. In a foretaste of the trench warfare that became the hallmark of the First World War, the trenches became the focus of Allied assaults. 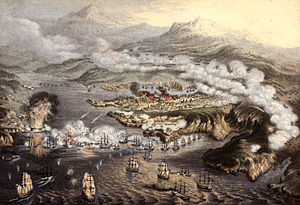 The Allies were able to restore many supply routes when winter ended. The new Grand Crimean Central Railway, built by the contractors Thomas Brassey and Samuel Morton Peto, which had been completed at the end of March 1855[23] was now in use bringing supplies from Balaclava to the siege lines. The railroad delivered more than five hundred guns and plentiful ammunition.[23] The Allies resumed their bombardment on 8 April 1855 (Easter Sunday). On 28 June (10 July), Admiral Nakhimov died from a head wound inflicted by an Allied sniper.[24]

On 24 August (5 September) the Allies started their sixth and the most severe bombardment of the fortress. Three hundred and seven cannon fired 150,000 rounds, with the Russians suffering 2,000 to 3,000 casualties daily. On 27 August (8 September), thirteen Allied divisions and one Allied brigade (total strength 60,000) began the last assault. The British assault on the Great Redan failed, but the French, under General Mac-Mahon, managed to seize the Malakoff redoubt and the Little Redan, making the Russian defensive position untenable. By the morning of 28 August (9 September), the Russian forces had abandoned the southern side of Sevastopol.[8][25]

Although defended heroically and at the cost of heavy Allied casualties, the fall of Sevastopol would lead to the Russian defeat in the Crimean War.[1] Most of the Russian casualties were buried in Brotherhood cemetery in over 400 collective graves. The three main commanders (Nakhimov, Kornilov, and Istomin) were interred in the purpose-built Admirals' Burial Vault.

Battles during the siege 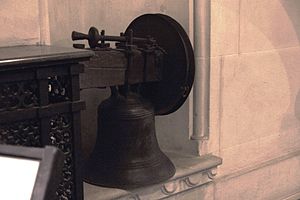 Three 17th Century Church Bells in Arundel Castle United Kingdom. These were taken from Sevastopol as trophies at the end of the Siege of Sevastopol

The cascabel (the large ball at the rear of old muzzle-loaded guns) of several cannon captured during the siege have been used to make the British Victoria Cross, the highest award for gallantry in the British Armed Forces. The metal from these cascabels will soon be exhausted, and there is some uncertainty as to what metal will be used once this occurs. There is some doubt as to the origin of the metal used in some of the medals awarded during the First World War.