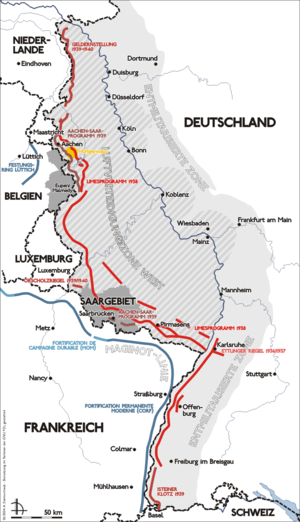 Map of the Siegfried line

The original Siegfried Line (German: Siegfriedstellung) was a World War I line of defensive forts and tank defences built by Germany in northern France during 1916–1917 as a section of the Hindenburg Line. In English the term "Siegfried Line" commonly refers to the "Westwall", the German term for a similar World War II-era defensive line built further east during the 1930s opposite the French Maginot Line.

This line stretched more than 630 km (390 mi) and featured more than 18,000 bunkers, tunnels and tank traps. The network of defensive structures stretched from Kleve on the border with the Netherlands, along the western border of the old German Empire, to the town of Weil am Rhein on the border to Switzerland. It was planned beginning in 1936 and built between 1938 and 1940.

Origin of the name Westwall

The official name for the Second World War-era defensive line construction program that collectively came to be known as the "Westwall" in German and "Siegfried Line" in English changed several times during the late 1930s reflecting areas in progress:

These programmes were all pushed forward with the highest priority, using every available resource. The origin of the name "Westwall" is unknown, but it appeared in popular use from the middle of 1939; there is a record of Hitler sending an Order of the Day to the soldiers and the workers at the "Westwall" on 20 May 1939.[citation needed]

Standard construction elements such as large Regelbau bunkers, smaller concrete "pillboxes", and "dragon's teeth" anti-tank obstacles were built as part of each construction phase, sometimes by the thousands. This standardisation was the most effective use of scarce raw materials, transport and workers.

"Dragon's teeth" tank traps were also known as Höcker in German ("humps" or "pimples" in English) because of their shape. These blocks of reinforced concrete stand in several rows on a single foundation. There are two typical sorts of barrier: Type 1938 with four teeth getting higher toward the back, and Type 1939 with five such teeth. Many other irregular lines of teeth were also built. Another design of tank obstacle, known as the Czech hedgehog, was made by welding together several bars of steel in such a way that any tank rolling over it would get stuck. If the contour of the land allowed it, water-filled ditches were dug instead of tank traps. Examples of this kind of defence are those north of Aachen near Geilenkirchen.

Small bunkers with 50 cm (20 in) thick walls were set up with three embrasures towards the front. Sleeping accommodations were hammocks. In exposed positions, similar small bunkers were erected with small round armoured "lookout" sections on the roofs. The programme was carried out by the Border Watch (Grenzwacht), a small military troop activated in the Rhineland immediately after the region was re-militarized by Germany after having been de-militarized following World War I. 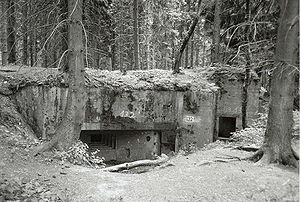 Type 10 Limes programme bunker seen from the back.

The Limes Programme began in 1938 following an order by Hitler to strengthen fortifications on the western German border. Limes refers to the former borders of the Roman Empire; the cover story for the programme was that it was an archaeological study.

Its Type 10 bunkers were more strongly constructed than the earlier border fortifications. These had 1.5 m (4 ft 11 in) thick ceilings and walls. A total of 3,471 were built along the entire length of the Siegfried Line. They featured a central room or shelter for 10-12 men with a stepped embrasure facing backwards and a combat section 50 cm (20 in) higher. This elevated section had embrasures at the front and sides for machine guns. More embrasures were provided for riflemen, and the entire structure was constructed so as to be safe against poison gas.

Heating was from a safety oven, the chimney of which was covered with a thick grating. Space was tight, with about 1 m2 (11 sq ft) per soldier, who was given a sleeping-place and a stool; the commanding officer had a chair. Surviving examples still retain signs warning "Walls have ears" and "Lights out when embrasures are open!"

The Aachen-Saar programme bunkers were similar to those of the Limes programme: Type 107 double MG casemates with concrete walls up to 3.5 m (11 ft) thick. One difference was that there were no embrasures at the front, only at the sides of the bunkers. Embrasures were only built at the front in special cases and were then protected with heavy metal doors. This construction phase included the towns of Aachen and Saarbrücken, which were initially west of the Limes Programme defence line.

The Western Air Defence Zone (Luftverteidigungszone West or LVZ West) continued parallel to the two other lines toward the east, and consisted mainly of concrete FlaK foundations. Scattered MG42 and MG34 emplacements added additional defence against both air and land targets. Flak turrets were designed to force enemy planes to fly higher, thus decreasing the accuracy of their bombing. These towers[clarification needed] were protected at close range by bunkers from the Limes and Aachen-Saar programmes.

The Geldern Emplacement lengthened the Siegfried Line northwards as far as Kleve on the Rhine, and was built after the start of World War II. The Siegfried Line originally ended in the north near Brüggen in the Viersen district. The primary constructions were unarmed dugouts which were extremely strongly built out of concrete. For camouflage they were often built near farms.

The early fortifications were mostly built by private firms, but the private sector was not able to provide the number of workers needed for the programmes that followed. This gap was filled by the Todt Organisation. With this organisation's help, huge numbers of forced labourers — up to 500,000 at a time — were found to work on the Siegfried Line. Transport of materials and workers from all across Germany was managed by the Deutsche Reichsbahn railway company, which took advantage of the well-developed strategic railway lines built on Germany's western border in World War I.

Working conditions were highly dangerous; for example, the most primitive means had to be used to handle and assemble extremely heavy armour plating weighing up to 60 tonnes (66 short tons). Life on the building site and after work was monotonous and many people gave up and left. Most workers received a medal depicting a bunker for their service.[1]

German industry could not deliver as many steel armour plates as were needed for the mounting of weapons in the bunkers. The armour-plated sections were designed to include the embrasures and their shutters as well as armoured cupolas for 360° defence. Germany depended on other countries to provide the alloys required in producing armoured plates (mostly nickel and molybdenum), so either the armour plates were left out or they were produced with low-quality replacement materials.

The bunkers were still fitted with guns, which proved inadequate in the first war years and were therefore dismantled, but the large-calibre weapons necessary for efficient defence could not be built into the bunkers.

The Siegfried Line at the start of the war had serious weaknesses. German General Alfred Jodl said after the war that it was "little better than a building site in 1939", and when Field Marshal Gerd von Rundstedt inspected the line its weak construction and insufficient weapons caused him to laugh. Fortunately for Germany,[2] despite France's declaration of war on Germany at the beginning of the Second World War, there was no major combat at the Siegfried Line at the start of the campaign in the west. Instead, both sides remained stuck in the so-called Phoney War, where neither side attacked the other and both stayed in their safe positions. The Reich Ministry of Information and Propaganda drew foreign attention to the unfinished Westwall, in several instances showcasing incomplete or test positions to portray the project finished and ready for action.[3] During the Battle of France, French forces made minor attacks against some parts of the line but the majority was left untested. When the campaign finished, transportable weapons were removed from the Siegfried Line and used in other places.[citation needed] The concrete sections were left in place in the countryside and soon became completely unfit for defence.[citation needed] The bunkers were instead used for storage.

With the D-Day landings in Normandy on 6 June 1944, war in the west broke out once more.[4] On 24 August 1944, Hitler gave a directive for renewed construction on the Siegfried Line. 20,000 forced labourers and members of the Reichsarbeitsdienst (Reich Labour Service), most of whom were 14–16-year-old boys, attempted to re-equip the line for defence purposes. Local people were also called in to carry out this kind of work, mostly building anti-tank ditches.

During construction, it was already clear that the bunkers could not withstand the newly developed armour-piercing weapons. At the same time as the Siegfried Line was reactivated, small concrete "Tobruk" bunkers were built along the border to the occupied area. These bunkers were mostly dugouts for single soldiers.

Main article: Allied advance from Paris to the Rhine 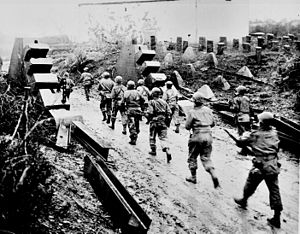 American soldiers cross the Siegfried Line and march into Germany.

In August 1944, the first clashes took place on the Siegfried Line; the section of the line where most fighting took place was the Hürtgenwald (Hürtgen Forest) area in the Eifel, 20 km (12 mi) southeast of Aachen. The Americans committed an estimated 120,000 troops plus reinforcements to the Battle of Hurtgen Forest. The battle in this heavily forested area claimed the lives of 24,000 American soldiers plus 9,000 non-battle casualties.[5] The German death toll is not documented.

After the Battle of Hurtgen Forest, the Battle of the Bulge began, starting in the area south of the Hürtgenwald, between Monschau and the Luxembourgish town of Echternach. This offensive was a last-ditch attempt by the Germans to reverse the course of the war in the West. German loss of life and material was severe in the failed effort.

There were serious clashes along other parts of the Siegfried Line and soldiers in many bunkers refused to surrender, often fighting to the death. By early 1945 the last Siegfried Line bunkers had fallen at the Saar and Hunsrück.

German propaganda, both at home and abroad, repeatedly portrayed the Westwall during its construction as an unbreachable bulwark. At the start of the war, the opposing troops remained behind their own defence lines. 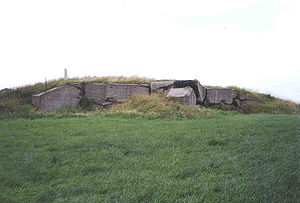 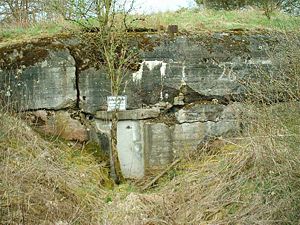 Bunker on the Siegfried line. 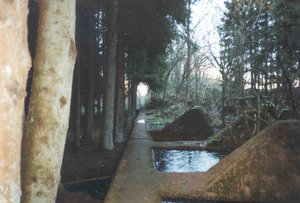 The Siegfried Line as a chain of biotopes.

During the post-war period, many sections of the Siegfried Line were removed using explosives.

In North Rhine Westphalia, about 30 bunkers still remain; most of the rest were either destroyed with explosives or covered with earth. Tank traps still exist in many areas; in the Eifel, for example, they run over several kilometres.

Since 1997, with the motto "The value of the unpleasant as a memorial" (Der Denkmalswert des Unerfreulichen), an effort has been made to preserve the remains of the Siegfried Line as a historical monument. This was intended to stop radical fascist groups making propaganda out of the Siegfried Line.

At the same time, state funding was still being provided to destroy the remains of the Siegfried Line. For this reason, emergency archaeological digs took place whenever any part of the line was removed, for example for road building. Archaeological activity was not able to stop the destruction of these sections but furthered scientific knowledge and revealed details of the line's construction.

Nature conservationists consider the remains of the Siegfried Line valuable as a chain of biotopes where, thanks to its size, rare animals and plants can take refuge and reproduce. This effect is magnified because the concrete ruins cannot be used for farming or forestry purposes.