From Infogalactic: the planetary knowledge core
Jump to: navigation, search
"Sights" redirects here. For the rock band, see The Sights. 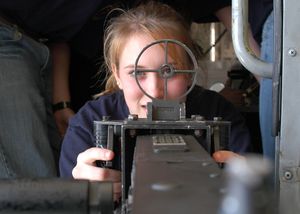 A Cadet looks through a machine gun sight

A sight is a device used to assist aligning or aim weapons, surveying instruments, or other items by eye. Sights can be a simple set or system of markers that have to be aligned together as well as aligned with the target (referred to as an iron sights on firearms).[1] They can also be optical devices that allow the user to see the image of an aligned aiming point in the same focus as the target. These include telescopic sights and reflector (or "reflex") sights. There are also sights that project an aiming point onto the target itself, such as laser sights.[citation needed] 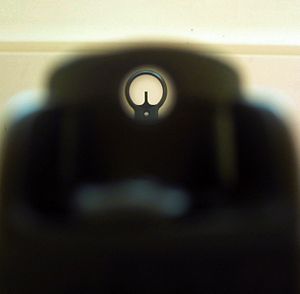 At its simplest, a sight is typically composed of two components, front and rear aiming pieces that have to be lined up. Sights such as this can be found on many types of devices including weapons, surveying and measuring instruments, and navigational tools.

On weapons, these sights are usually formed by rugged metal parts, giving these sights the name "iron sights",[2] a term relative to other weapon sights in that they are not optical or computing sights.[3] On many types of weapons they are built-in and may be fixed, adjustable, or marked for elevation, windage, target speed, etc.[1] They also are classified in forms of notch (open sight) or aperture (closed sight). These types of sights can take considerable experience and skill in the user who has to hold a proper eye position and simultaneously focus on the rear sight, the front sight, a target at different distances, and align all three planes of focus.[4] 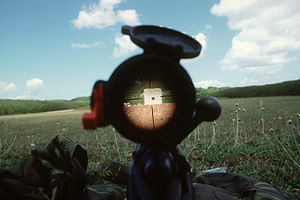 A view through the 20× power telescopic sight

Optical sights use optics that give the user an image of an aligned aiming point or pattern (also called a reticle) superimposed at the same focus as the target.[citation needed]

A telescopic sight is an optical telescope equipped with some form of graphic image pattern reticle mounted in an optically appropriate position in the optical system to give an accurate aiming point. Telescopic sights are used on a wide range of devices including guns, surveying equipment, and even as sights on larger telescopes (called a finderscope).

Another type of optical sight is the reflector (or "reflex") sight, a generally non-magnifying optical device that allows the user to look through a glass element and see a reflection of an illuminated aiming point or some other image superimposed on the field of view.[5] These sights have been around for over 100 years and been used on all types of weapons and devices.

Reflector sights were first used as a weapon sight in German aircraft towards the end of World War I. Over the years they became more sophisticated, adding lead computing gyroscopes and electronics (the World War II Gyro gunsight)[6] radar range finding and other flight information in the 1950s and 60s, eventually becoming the modern head-up display.

Other types of optical sights 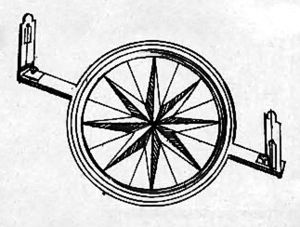 There are many types of sighting devices. They can be fixed, mechanical, optical, computational, or a mixture of all of these attributes.