From Infogalactic: the planetary knowledge core
Jump to: navigation, search
For other uses, see Sigma (disambiguation).

Sigma (upper-case Σ, lower-case σ, lower-case in word-final position ς; Greek: σίγμα) is the eighteenth letter of the Greek alphabet. In the system of Greek numerals, it has a value of 200. When used at the end of a word (and when the word is not all caps), the final form (ς) is used, e.g. Ὀδυσσεύς (Odysseus); note the two sigmas in the center of the name, and the word-final sigma at the end.

The name of sigma, according to one hypothesis,[1] may continue that of Phoenician Samekh. According to a different theory,[2] its original name may have been san (the name today associated with another, obsolete letter), while sigma was a Greek innovation that simply meant "hissing", based on a nominalization of a verb σίζω (sízō, from earlier *sig-jō, meaning 'I hiss'). 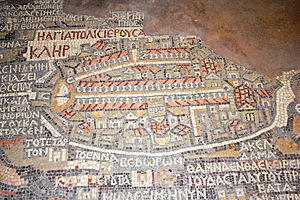 A plaque reading "Metochion of Gethsemane" (Μετόχιον Γεθσημανῆς) in Jerusalem, with a lunate sigma both at the end and in the middle of the word

In handwritten Greek during the Hellenistic period (4th and 3rd centuries BC), the epigraphic form of Σ was simplified into a C-like shape.[3] It is also found on coins from the fourth century BC onward.[4] This became the universal standard form of sigma during late antiquity and the Middle Ages. It is today known as lunate sigma (upper-case Ϲ, lower-case ϲ), because of its crescent-like shape.

It is still widely used in decorative typefaces in Greece, especially in religious and church contexts, as well as in some modern print editions of classical Greek texts. The forms of the Cyrillic letter С (representing /s/) and Coptic letter Ⲥ sima are derived from lunate sigma.

A dotted lunate sigma (sigma periestigmenon, encoded at U+03FE Ͼ) was used by Aristarchus of Samothrace as an editorial sign indicating that the line so marked is at an incorrect position. Similarly, an antisigma, or reversed sigma (Ͻ), may mark a line that is out of place. A dotted antisigma or dotted reversed sigma (antisigma periestigmenon: Ͽ) may indicate a line after which rearrangements should be made, or to variant readings of uncertain priority.

Upper-case Σ may be used in the Berber Latin alphabet for [ʕ], though the INALCO standard uses Ɛ instead.

The uppercase form of sigma was re-borrowed into the Latin alphabet – more precisely, the International African Alphabet – to serve as the uppercase of modern esh (lowercase: ʃ).

Upper-case Σ is used as a symbol for:

Lower-case σ is used for:

During the 1930s, an upper-case Σ was in use as the symbol of the Ação Integralista Brasileira, a fascist political party in Brazil.

Sigma Corporation uses the name of the letter but not the letter itself, but in many Internet forums, photographers refer to the company or its lenses using the letter. Sigma Aldrich incorporate both the name and the character in their logo.