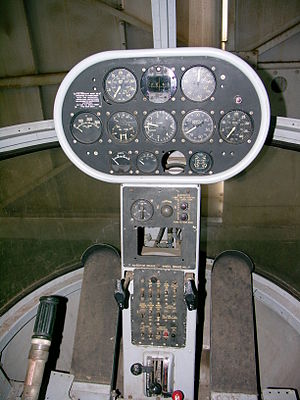 The H-5, originally designated the R-5 by the military, was designed to provide a helicopter having greater useful load, endurance, speed, and service ceiling than the Sikorsky R-4. The R-5 differed from the R-4 by having an increased rotor diameter and a new, longer fuselage for two persons in tandem.[1] Larger than the R-4 or the later R-6, the R-5 was fitted with a more powerful Wasp Junior 450-hp radial engine, and quickly proved itself the most successful of the three types.[3] The first XR-5 of four ordered made its initial flight on 18 August 1943. In March 1944, the United States Army Air Force ordered 26 YR-5As for service testing, and in February 1945, the first YR-5A was delivered. This order was followed by a production contract for 100, outfitted with racks for two litters (stretchers); only 34 were actually delivered.[1]

Sikorsky soon developed a modified version of the YR-5A, the S-51, featuring a greater rotor diameter, greater carrying capacity and gross weight, which first flew on 16 February 1946.[1] With room for three passengers plus pilot, the S-51 was initially intended to appeal to civilian as well as military operators, and was the first helicopter to be sold to a commercial user.[4] Eleven S-51s were ordered by the USAF and designated the R-5F, while ninety went to the Navy as the HO3S-1, commonly referred to as the 'Horse'.[1]

In Britain, Westland Aircraft began production in 1946 of the Westland-Sikorsky S-51 Dragonfly for the Royal Navy and the Royal Air Force, all of which were powered by a 500 hp Alvis Leonides engine. This gave an improved top speed of 103 mph and a service ceiling of 14,000 ft. In total, 133 Westland-Sikorsky Dragonfly helicopters were built. A considerably modified version was also developed by Westland as the Westland Widgeon, but the type was never adopted for service.[citation needed]

The U.S. Navy ordered four S-51s "off-the-shelf" from Sikorsky in late 1946 for use in the Antarctic and Operation Highjump, placing them into naval inventory as the HO3S-1.[5] Carried aboard the seaplane tender USS Pine Island, on Christmas Day 1946 an HO3S-1 of VX-3 piloted by Lieutenant Commander Walter M. Sessums became the first helicopter to fly in the Antarctic. Having proved its capabilities, the initial naval HO3S-1 order was followed by subsequent purchases of an additional 42 aircraft in 1948.[6] The Navy equipped several warship classes with HO3S-1 utility helos, including aircraft carriers, seaplane tenders, icebreakers, Des Moines-class cruisers, and Iowa-class battleships. By February 1948, the Marine Corps had equipped HMX-1, its first regular Marine Helicopter Transport Squadron, with six HO3S-1 aircraft. With a passenger load of only three lightly dressed persons, the HO3S-1s were primarily operated in the utility role by the marines; for the transport role, an additional nine tandem-rotor Piasecki-built HRP-1 helicopters were later added to the squadron.[7] Eventually, the U.S. Navy would acquire a total of 88 HO3S-1 (S-51) helicopters.[citation needed]

Thirty-nine additional specialized rescue helicopters were built, as the H-5G, in 1948, while 16 were fitted with pontoons as the H-5H amphibian in 1949.[1]

The R-5 had been designated under the United States Army Air Force system, a series starting with R-1 and proceeding up to about R-16. In 1947 with the start of the United States Air Force, there was a new system, and many aircraft, but not all, were redesignated. The R-6 became the H-6. The United States Army broke off with its own designation system in the 1950s, resulting in new designations for its helicopter projects (such as the HO-6).[9] In 1962 under the new tri-service system (see 1962 United States Tri-Service aircraft designation system), many navy and army aircraft were given the low numbers. Under the 1962 system, the low H numbers were given to new aircraft. For example, H-6 was given to the HO-6, which entered service as the Cayuse.[citation needed]

During its service life, the H-5/SO3S-1 was used for utility, rescue, and mercy missions throughout the world, including flights during Operation Highjump in the Antarctic. While the extra power of the H-5 made it significantly more useful than its R-4 and R-6 cousins, the H-5/HO3S-1 suffered, like most early small tandem-seat single-rotor machines, from center of gravity problems. As a matter of routine, the helicopter was equipped with two iron-bar weights – each in a canvas case – one of 25 lb (11 kg) & one of 50 lb (23 kg). Flying with no passengers, both weights were placed forward alongside the pilot. With three passengers, both weights were normally placed in the baggage compartment. However, in conditions of high ambient temperatures, which reduced lift due to the lowered air density, all weights were jettisoned. If the weights could not be recovered later, pilots on future missions were forced to utilize rocks or other improvised weights next to the pilot after offloading three passengers, or else travel at a very slow 25 knots (46 km/h; 29 mph).[10]

The H-5/SO3S-1 gained its greatest fame during the Korean War when it was called upon repeatedly to rescue United Nations pilots shot down behind enemy lines and to evacuate wounded personnel from frontline areas. It was eventually replaced in most roles by the H-19 Chickasaw.[citation needed] In 1957, the last H-5 and HO3S-1 helicopters were retired from active U.S. military service.[citation needed] 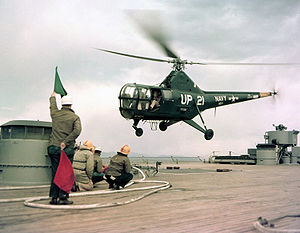 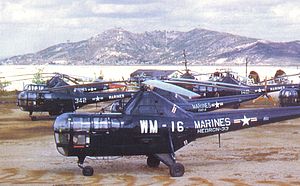 A group of U.S. Marine Corp HO3S-1 helicopters parked on a field in Incheon, South Korea 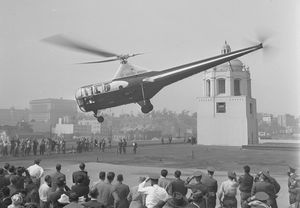 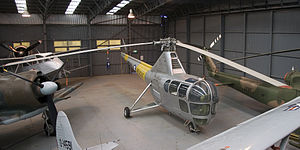 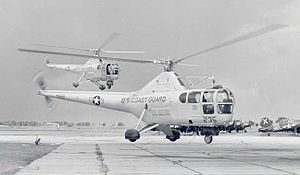 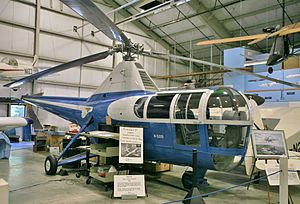 A S-51 on display at the New England Air Museum