The Sikorsky MH-53 Pave Low series is a long-range combat search and rescue (CSAR) helicopter for the United States Air Force. The series was upgraded from the HH-53B/C, variants of the Sikorsky CH-53 Sea Stallion. The HH-53 "Super Jolly Green Giant" was initially developed to replace the HH-3 "Jolly Green Giant". The helicopters later transitioned to Special Operations missions. The U.S. Air Force's MH-53J/M fleet was retired in September 2008 and was replaced by the CV-22B Osprey.[1]

The US Air Force ordered HH-53B and HH-53C variants for Search and Rescue units, and developed the MH-53J Pave Low version for Special Operations missions.

The large green airframe of the HH-53B earned it the nickname "Super Jolly Green Giant". This name is a reference to the smaller HH-3E "Jolly Green Giant", a stretched variant of the H-3 Sea King, used in the Vietnam War for combat search-and-rescue (CSAR) operations.

The US Air Force regarded their Sikorsky S-61R/HH-3E "Jolly Green Giant" long-range combat search and rescue (CSAR) helicopters favorably and was interested in the more capable S-65/CH-53A. In 1966, the USAF awarded a contract to Sikorsky for development of a CSAR variant of the CH-53A.[7] 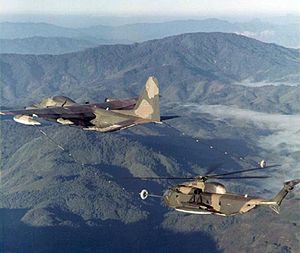 A HH-53B of the 40th Aerospace Rescue and Recovery Squadron refueling from a HC-130P Hercules over North Vietnam, 1969-70

The HH-53B, as it was designated, featured:

The HH-53B was essentially an interim type, with production quickly moving on to the modestly improved Air Force HH-53C CSAR variant. The most visible difference between the HH-53B and HH-53C was that the HH-53C dispensed with the fuel-tank bracing struts. Experience with the HH-53B showed that the original tank was too big, adversely affecting performance when they were fully fueled, and so a smaller 450 US gal (1,703 L) tank was adopted in its place. Other changes included more armor and a more comprehensive suite of radios to improve communications with C-130 tankers, attack aircraft supporting CSAR actions, and aircrews awaiting rescue on the ground. The HH-53C was otherwise much like the HH-53B, with the more powerful T64-GE-7 engines.[7]

A total of 44 HH-53Cs were built, with introduction to service in August 1968. Late in the war they were fitted with countermeasures pods to deal with heat-seeking missiles. As with the HH-53B, the HH-53C was also used for covert operations and snagging reentry capsules, as well as snagging reconnaissance drones. A few were assigned to support the Apollo space program, standing by to recover an Apollo capsule in case of a launchpad abort, though such an accident never happened.[7]

In addition to the HH-53Cs, the Air Force obtained 20 CH-53C helicopters for more general transport work. The CH-53C was apparently very similar to the HH-53C, even retaining the rescue hoist, the most visible difference being that the CH-53C did not have an in-flight refueling probe. Since CH-53Cs were used for covert operations, they were armed and armored like HH-53Cs.[7] A good number of Super Jollies were converted into Pave Low special-operations helicopters.[7] PAVE or Pave is an Air Force code name for a number of weapons systems using advanced electronics.

The USAF's Super Jollies were useful helicopters, but they were essentially daylight / fair weather machines, and downed aircrew were often in trouble at night or in bad weather. A limited night / foul weather sensor system designated "Pave Low I" based on a low-light-level TV (LLLTV) imager was deployed to Southeast Asia in 1969 and combat-evaluated on a Super Jolly, but reliability was not adequate.[7]

In 1975, an HH-53B was fitted with the much improved "Pave Low II" system and re-designated YHH-53H. This exercise proved much more satisfactory, and so eight HH-53Cs were given a further improved systems fit and redesignated HH-53H Pave Low III, with the YHH-53H also upgraded to this specification. All were delivered in 1979 and 1980.[7]

The HH-53H retained the in-flight refueling probe, external fuel tanks, rescue hoist, and three-gun armament of the HH-53C; armament was typically a minigun on each side, and a Browning .50cal (12.7mm) gun in the tail to provide more reach and a light anti-armor capability. The improvements featured by the HH-53H included:

The FLIR and TFR were mounted on a distinctive "chin" mount. The HH-53H could be fitted with 27 seats for troops or 14 litters. The upgrades were performed by the Navy in Pensacola, reflecting the fact that the Navy handled high-level maintenance on Air Force S-65s. In 1986, the surviving HH-53Hs were given an upgrade under the CONSTANT GREEN program, featuring incremental improvements such as a cockpit with blue-green lighting compatible with night vision goggles (NVGs). They were then reclassified as "special operations" machines and accordingly given a new designation of MH-53H.[7]

The HH-53H proved itself and the Air Force decided to order more, coming up with an MH-53J Pave Low III Enhanced configuration. The general configuration of the MH-53J is similar to that of the HH-53J, the major change being fit of twin T64-GE-415 turboshafts with 4,380 shp (3,265 kW) each, as well as more armor, giving a total armor weight of 1,000 lb (450 kg). There were some avionics upgrades as well, including fit of a modern Global Positioning System (GPS) satellite navigation receiver. A total of 31 HH-53Bs, HH-53Cs, and CH-53Cs were upgraded to the MH-53J configuration from 1986 through 1990, with all MH-53Hs upgraded as well, providing a total of 41 MH-53Js.[7] 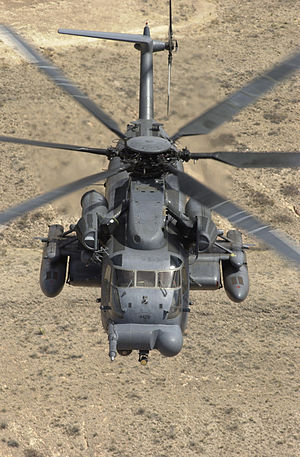 The MH-53J's main mission was to drop off, supply, and pick up special forces behind enemy lines. It also can engage in combat search and rescue missions. Low-level penetration was made possible by a state-of-the-art terrain following radar, as well as infrared sensors that allow the helicopter to operate in bad weather. It was equipped with armor plating. It could transport 38 troops at a time and sling up to 20,000 pounds (9,000 kg) of cargo with its external hook. It was capable of a top speed of 165 mph (266 km/h) and had a ceiling of 16,000 feet (4,900 m).

The MH-53M Pave Low IV was modified from the MH-53J configuration with the addition of Interactive Defensive Avionics System/Multi-Mission Advanced Tactical Terminal or IDAS/MATT. The system enhanced the defensive capabilities of the Pave Low. It provided instant access to the total battlefield situation, through near real-time Electronic Order of Battle updates. It also provided a new level of detection avoidance with near real-time threat broadcasts over-the-horizon, so crews can avoid and defeat threats, and replan en route if necessary.

While waiting for delivery of the HH-53Bs, the Air Force obtained two Marine CH-53As for evaluation and training. The first of eight HH-53Bs performed its initial flight on 15 March 1967, and the type was performing CSAR missions with the USAF Aerospace Rescue & Recovery Service in Southeast Asia by the end of the year. The Air Force called the HH-53B the "Super Jolly". It was used for CSAR, covert combat operations, and "snagging" reentry capsules from photo-reconnaissance satellites.[7]

The Super Jollies made headlines in November 1970 in the unsuccessful raid into North Vietnam to rescue prisoners-of-war from the Son Tay prison camp, as well as in the operation to rescue the crew of the freighter SS Mayagüez from Cambodian Khmer Rouge fighters in May 1975. The Air Force lost 17 Super Jollies in the conflict, with 14 lost in combat – including one that was shot down by a North Vietnamese MiG-21 on 28 January 1970 while on a CSAR mission over Laos – and three lost in accidents.[7]

The first nine HH-53H Pave Lows became operational on 1 July 1980, and were transferred from the Military Airlift Command, where they were to have been CSAR assets, to the 1st Special Operations Wing in the aftermath of the Operation Eagle Claw disaster. Two of the HH-53Hs were lost in training accidents in 1984, and so two CH-53Cs were brought up to HH-53H standard as replacements.[7]

The MH-53 Pave Low's last mission was on 27 September 2008, when the remaining six helicopters flew in support of special operations forces in Southwest Asia. These MH-53Ms were retired shortly thereafter.[1][8]

File:MH53 night.jpg
MH-53 Pave Lows fly over Iraq on their last combat missions in September 2008, before their retirement.

The initial version of this article was based on a public domain article from Greg Goebel's Vectorsite. This article contains information that originally came from a US Government website, in the public domain. USAF MH-53 page