The Sikorsky S-92 is a four-bladed twin-engine medium-lift helicopter built by Sikorsky Aircraft for the civil and military helicopter market. The S-92 was developed from the Sikorsky S-70 helicopter and has similar parts such as flight control and rotor systems.

The H-92 Superhawk is a military version of the S-92 in the utility transport role, capable of carrying 22 troops. The H-92 can also be configured for specific missions, including search and rescue and executive transportation. The CH-148 Cyclone is a shipboard maritime helicopter variant currently under development for the Canadian Forces.

After the 1973 oil crisis, major oil and gas companies began exploration further offshore, thus creating a need for aircraft such as the S-92 with sufficient capability.[3]

Sikorsky Aircraft first displayed a S-92 mockup of the planned helicopter in 1992. The S-92 was to be offered for sale beginning in 1993, but due to a decline in the international market for helicopters, this was delayed. In 1995 Sikorsky formed Team S-92 with international partners and launched the helicopter program at the Paris Airshow that year.[4] Sikorsky developed the S-92 to compete with civil aircraft such as the Aerospatiale/Eurocopter Super Puma.[5] The helicopter uses a new airframe with dynamic components based on the S-70/H-60 components. The S-92 took its maiden flight on December 23, 1998 at the Sikorsky Development Flight Center, West Palm Beach, Florida.[5][6]

In July 2000, Sikorsky announced design changes to the S-92. The fuselage of prototype #3 was lengthened by 16 in (40 cm) aft of the cockpit, the tail pylon was shortened by 41 in (1.04 m), and the horizontal stabilizer was repositioned from the left side opposite the tail rotor to the right side at the base of the tail pylon. The modifications to the tail solved a pitch stability issue discovered during flight testing, and were reported to allow the aircraft to meet a key requirement of the Nordic Standard Helicopter Program (NSHP) for shipboard stowage. The lengthening of the fuselage and shortening of the tail pylon shifted the aircraft center of gravity (CG) forward, permitting a more level attitude in flight. The longer fuselage allowed for an additional row of three seats, as well as a larger passenger door option for Search and Rescue (SAR) customers. Sikorsky incorporated the changes into the following two prototypes as the production standard configuration.[7] Some reports suggested that the modifications were actually to resolve damage from structural design flaws.[8]

The S-92 is built and customized in Sikorsky's Coatesville, Pennsylvania facility. The S-92 received Federal Aviation Administration (FAA) part 29 type certification on December 19, 2002,[9] and received International European Aviation Safety Agency/Joint Aviation Authorities (EASA/JAA) certification on June 8, 2004.[10] In June 2009, Sikorsky Aircraft entered into a joint-venture with Tata Advanced Systems Limited (TASL) for S-92 manufacturing in India for export and domestic markets. A US$200 million manufacturing plant will be operational in Hyderabad by 2010. Initially, TASL will supply the complete cabins for the S-92 to Sikorsky.[11][12] The first cabin was delivered in November 2010.[13] 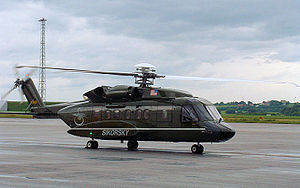 The S-92 is multi-purpose helicopter powered by twin GE CT7-8A turboshaft engines and has an aluminum airframe and some composite components. The four-bladed fully articulated composite main rotor blade is wider and has a longer radius than the Sikorsky S-70. The tapered blade tip sweeps back and angles downward to reduce noise and increase lift. Most of the rotor system components aside from the blades are titanium.[citation needed]

The S-92 features an active vibration control system, using vibration sensors and structurally mounted force generators to increase flight comfort and lower acoustic levels to below certification requirements.[14] A 2008 study by Norway's Flymedisinsk Institute found that the S-92's vibration levels were 42 percent above that of the Eurocopter EC225 Super Puma; Sikorsky disputed this finding, saying that the study hadn't used their latest anti-vibration technology.[15] In February 2011, the noise and vibration levels were reportedly subject to health concerns, allegedly causing tinnitus and heart problems.[16][17]

A number of safety features such as flaw tolerance, bird strike capability, and engine burst containment have been incorporated into the design. Adherence to FAA FAR part 29 has led the FAA certification board to call the S-92 the "safest helicopter in the world".[18] The S-92 reportedly met the FAR part 29 "run dry" requirement by asserting the loss of oil pressure in the main gear box is "extremely remote".[19]

Sikorsky entered the VH-92 variant of the S-92 into the VXX competition for U.S. Presidential helicopter Marine One, but lost to the Lockheed Martin VH-71 Kestrel.[citation needed] However, the competition was restarted in 2010 due to ballooning VH-71 development costs, allowing Sikorsky to resubmit the VH-92 in April 2010.[22] By mid-2013, all other aircraft makers are understood to have dropped out of the contest, leaving only Sikorsky.[23] On 7 May 2014, it was announced that the S-92 had won the VXX competition to replace the aging Sikorsky SH-3 Sea King helicopters that transport the President of the United States.[24]

Sikorsky entered a Search and rescue variant of the H-92 in U.S. Air Force's CSAR-X combat search and rescue competition beginning in 2006. Its competitors were the AgustaWestland EH101 and HH-47, but by December 2012 all other manufacturers had withdrawn. Richard Aboulafia of the Teal Group expected the company to offer an S-92 version.[25] Flight International magazine expects Sikorsky to bid a version of its MH-60 special operations helicopter.[26]

After Sikorsky successfully challenged in court the preferred supplier status of NHIndustries NH90 for the Nordic Standard Helicopter Programme an open competition was held.[27] Sikorsky entered the S-92 as a candidate for the Norwegian All Weather Search and Rescue Helicopter (NAWSARH) that is planned to replace the Royal Norwegian Air Force Westland Sea King Mk.43B in 2015.[28] The other candidates for the NAWSARH contract of 10 to 12 helicopters were AgustaWestland AW101, Bell Boeing V-22 Osprey, Eurocopter EC225, and NHIndustries NH90.[29] The V-22 was eliminated from the competition in 2012.[30] The S-92 was removed from the competition in July 2013 and was subsequently won by AgustaWestland with an order for 16 AW101s.[27]

The Irish Coast Guard is replacing its Sikorsky S-61N fleet with the S-92. First aircraft was delivered on 29 January 2012. The aircraft are operated by CHC Helicopter.[35][36] 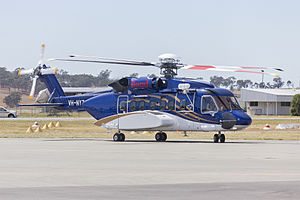 The S-92A is the civilian variant and is available in a number of versions. The civil transport version has an airliner-type interior which seats 19 passengers. The utility transport version has 22 side-facing seats with a full cabin width rear ramp. The 733 sq ft (68.1 m2) interior cabin area can also be configured to accommodate up to three airline-style LD3 cargo containers. Additional stowage space is available in the 140 sq ft (13 m2) area located in the aft ramp compartment. During development it was referred to as the S-92C Helibus.

The H-92 Superhawk is the military variant of the S-92. It has been demonstrated to the U.S. Air Force, Marine Corps and Coast Guard. The H-92 has more powerful GE CT7-8C engines, rated at 3,070shp (2,300 kW) and, unlike the S-92, has fly-by-wire flight controls. The search and rescue variant provides space for seats, litters, auxiliary fuel cell and SAR emergency equipment.

In July 2004, the H-92 Superhawk was selected by Canada for its Maritime Helicopter Programme (MHP) as the CH-148 Cyclone. Canada ordered 28 helicopters in November 2004.[37] The program has been delayed multiple times.[38]

In May 2014, Sikorsky was awarded a US$1.24 billion contract to build a variant of the S-92 for transport of the U.S. President. Sikorsky will outfit this variant with an executive interior and military mission support systems, including triple electrical power and redundant flight controls. Six of the variant, designated VH-92A,[39] have been ordered by the U.S. Navy for delivery in 2017.[40] Production of a further 17 aircraft is planned to begin in 2020.[41][42] The total FY2015 program cost is $4.718 billion for 23 helicopters, at an average cost of $205M per aircraft.[2] 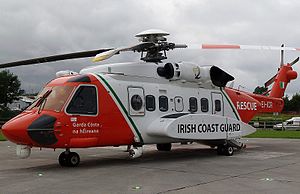 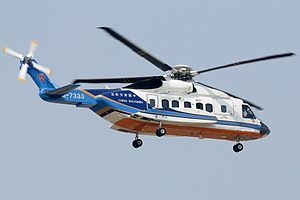 A S-92 from China Southern Airlines 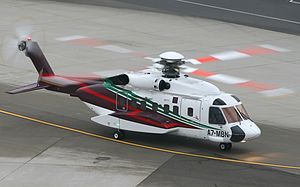 On July 2, 2008, a S-92A (registration VH-LOH, serial number 920036) operated by CHC Helicopters (Australia) was returning from an offshore oil facility en route to Broome, Australia with 2 pilots and 14 passengers on board when it suffered a "massive loss of main gearbox oil". The crew made a skillful emergency descent and landing on a Broome beach following the activation of onboard warning systems.[74]

On July 19, 2008, an S-92 carrying Rev. Sun Myung Moon crashed in South Korea.[75] The helicopter was flying in inclement weather which forced it down on a hillside. The 16 people aboard were slightly injured in the crash.[76][77]

On March 12, 2009, Cougar Helicopters Flight 91, an S-92A operated by Cougar Helicopters carrying 18 passengers and crew en route to oil platforms off the coast of Newfoundland, crashed and sank in 170 meters (560 ft) of water[78] during an attempted ditching. One person was rescued from the North Atlantic with serious injuries[79] and the others did not survive.[80] The crash was determined[81] to be caused by 16 separate factors that lead to the fatal crash but no single one was to blame.[82] 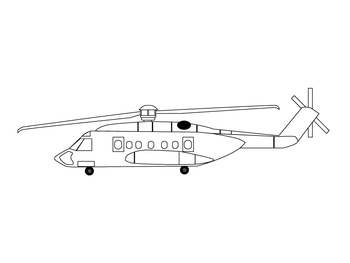