From Infogalactic: the planetary knowledge core
Jump to: navigation, search
For other uses, see Silver Arrow. 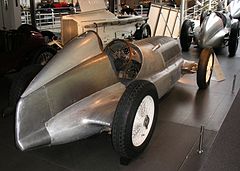 Silver Arrows (German: Silberpfeil) was the name given by the press to Germany's dominant Mercedes-Benz and Auto Union Grand Prix motor racing cars between 1934 and 1939, and also later applied to the Mercedes-Benz Formula One and sports cars in 1954 and 1955.

For decades until the introduction of sponsorship liveries, each country had its traditional colour in automobile racing. Italian race cars are still famous for their Rosso Corsa red, British ones are British racing green, French Bleu de France blue, etc.

German cars like the Blitzen Benz were white, as were the three Mercedes that won the 1914 French Grand Prix 1-2-3. On the other hand, Mercedes won the Italian Targa Florio with cars painted red in 1922 (Giulio Masetti) and 1924 (Christian Werner), blending in with the local competitors. The big supercharged 200 hp Mercedes-Benz SSKL with which Rudolf Caracciola won the 1931 Mille Miglia was called White Elephant.

In 1958 Alfred Neubauer's biography was published, and he described the origin of the Silver Arrows as being accidental. In 1934 the international governing body of motor sport prescribed a maximum weight limit of 750 kg for Grand Prix racing cars, excluding tyres and fuel. Neubauer said that when in spring 1934, the Mercedes-Benz team placed its new Mercedes-Benz W25 on the scrutineering scales prior to the Eifelrennen at the Nürburgring, it allegedly recorded 751 kg (1,656 lb). Racing manager Alfred Neubauer and his driver Manfred von Brauchitsch, who both later published their memoirs, claimed that they had the idea of removing all the white paint from the bodywork. The story continues that the next day the shining silver aluminium beneath was exposed and scrutineering was passed. After the 350 hp (260 kW) car of Von Brauchitsch won the race, the nickname Silver Arrow was born, according to this version.

This story did not appear until 1958, and no reference to it has been found in contemporary sources. It has since been established that von Brauchitsch had raced a streamlined silver SSKL on the AVUS in 1932, which was called a Silver Arrow in live radio coverage. Also, in 1934, both Mercedes and Auto Union had entered the Avusrennen with silver cars. The next big event was the 1934 Eifelrennen, but as few cars complying to the new rules were ready, it was held for Formule Libre, so weight was still not a race-critical issue at that time.[1]

By the 1930s, modern stressed-skin aircraft fuselage construction was already using polished and unpainted aluminium panels for streamlining and to save weight. Also the wealthy motor-racing fraternity would have been aware that in heraldry, white and silver are the same colour, or 'tincture', described as 'Argent'; (similarly yellow and gold are both called 'Or').

The superiority of these vehicles in international motor racing established the term "Silver Arrow" as a legend, for example by usually winning the first race in which they were entered[citation needed]. The names Rudolf Caracciola, Bernd Rosemeyer, Hermann Lang, and later Stirling Moss and Juan Manuel Fangio, will always be associated with the eras of these racing cars.

Mercedes-Benz recalled its great past in the 1970s with rallye cars, and in the 1980s with the Sauber sportscars as well as the DTM touring cars, and also the multiple race winning Mercedes AMG F1 cars from 2010 onward. 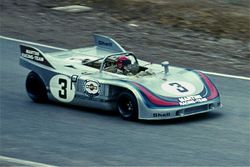 Now a traditional colour for road-cars in reference to the Silver Arrows, most German car companies have a shade of silver in their catalogues conforming to Silberpfeil-Grau, or Silver Arrow Grey.

However, the Audi and Mercedes-Benz are not the only ones who paint their cars in a silver colour. Porsche has also inherited the tradition of silver arrows. But the BMW company still paints its cars in the traditional white colour.

At the 1999 Le Mans 24 Hours, a total of seven Silver Arrows were entered in the Le Mans Prototype class:

In 2010, Ross Brawn (of Formula One's Mercedes GP) introduced the new cars for that season as the new Silver Arrows, with Germans Nico Rosberg and 7 time world champion Michael Schumacher driving. In 2012, Nico Rosberg drove the W03 to victory at the Chinese Grand Prix to claim Mercedes' first victory in Formula One since 1955. Mercedes Benz's 2014 Formula One challenger, the W05 Hybrid (with drivers Lewis Hamilton & Nico Rosberg) is as of the British Grand Prix one of the most dominant cars in the sports history - winning (and leading every lap of) the first 7 races and only falling due to an ERS failure on both cars in the Canadian Grand Prix. Overall, the car achieved 16 wins out of 19 races and 18 pole positions out of 19 races. This car's successor, the W06 hybrid, has also been seen as even more of a success, attaining 18 pole positions (11 for Hamilton, 7 for Rosberg)and 16 wins ( 10 for Hamilton, 6 for Rosberg) in the 2015 season, with both cars finishing on the podium in each event barring the 2015 Hungarian grand prix, where, due to various incidents during the race, as well as the unexpected raw pace of the Ferrari SF15-T, both cars were forced to finish in 6th position (Hamilton) and 8th position (Rosberg). Additionally, only 1 car finished the 2015 Italian Grand Prix as Nico Rosberg had an engine failure, whereas Lewis Hamilton won the race. The 2015 Hungarian Grand Prix also marked the first time since the 2013 Brazilian Grand Prix where neither of the Mercedes cars, as well as the teams using a Mercedes powerplant, finished on the podium further highlighting the level of dominance Mercedes has shown since the introduction of the 1.6 Litre turbocharged hybrid engine formula. The from the 2014 British grand prix till the 2015 Italian grand prix, Mercedes had achieved 23 consecutive pole positions. The 2015 Singapore grand prix was the first time since the 2013 Brazilian grand prix that a Mercedes powered car did not qualify on the front row of the grid. On the 11th October 2015 at the Russian grand prix, Mercedes amg Petronas won their second consecutive constructors championship