From Infogalactic: the planetary knowledge core
Jump to: navigation, search
This article is about the original bridge which collapsed in 1967. For the current bridge, see Silver Memorial Bridge.
For other uses, see Silver Bridge (disambiguation). 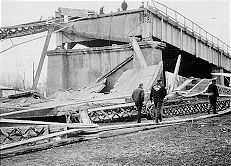 The collapsed Silver Bridge, as seen from the Ohio side

The Silver Bridge was an eyebar-chain suspension bridge built in 1928 and named for the color of its aluminum paint. The bridge connected Point Pleasant, West Virginia, and Gallipolis, Ohio, over the Ohio River.

On December 15, 1967, the Silver Bridge collapsed while it was full of rush-hour traffic, resulting in the deaths of 46 people. Two of the victims were never found. Investigation of the wreckage pointed to the cause of the collapse being the failure of a single eyebar in a suspension chain, due to a small defect 0.1 inch (2.5 mm) deep. Analysis showed that the bridge was carrying much heavier loads than it had originally been designed for and had been poorly maintained.

The collapsed bridge was replaced by the Silver Memorial Bridge, which was completed in 1969.

At the time of the Silver Bridge construction, eyebar bridges had been built for about 100 years. Such bridges had usually been constructed from redundant bar links, using rows of four to six bars, sometimes using several such chains in parallel. An example can be seen in the Clifton Suspension Bridge, designed by Isambard Kingdom Brunel. The chain eyebars are redundant in two dimensions. This is an early suspension bridge still in service. Other bridges of similar design include the earlier road bridge over the Menai Strait built by Thomas Telford in 1826; the Széchenyi Chain Bridge in Budapest, built in 1839–1849, destroyed in the closing days of World War II by retreating Germans in 1945, and rebuilt identically by 1949, with redundant chains and hangers; and the Three Sisters, suspension bridges of similar design in Pittsburgh.

The eyebars in the Silver Bridge were not redundant, as links were composed of only two bars each, of high-strength steel (more than twice the tensile strength of common mild steel), rather than a thick stack of thinner bars of modest material strength "combed" together, as is usual for redundancy. With only two bars, the failure of one could impose excessive loading on the second, causing total failure — which would be unlikely if more bars were used. While a low-redundancy chain can be engineered to the design requirements, the safety is completely dependent upon correct, high-quality manufacturing, assembly, and maintenance.

In comparison, the Brooklyn Bridge, with wire-cable suspension, was designed with an excess strength factor of six. Wire cables have extremely high levels of redundancy, with the failure of a single wire strand almost unnoticeable. During its construction it was discovered that some rejected steel wire had been used. To compensate for the rejected steel wire already in the cables, 150 more good steel wires per cable were added to bring the total up to 5,434 redundant strands. The designer's son decided the safety factor may have been reduced, but was far more than sufficient.[2]

The towers were "rocker" towers, which allow the bridge to respond to various live loads by a slight tipping of the supporting towers, which were parted at the deck level, rather than passing the suspension chain over a lubricated or tipping saddle, or by stressing the towers in bending. The towers required the chain on both sides for their support; failure of any one link on either side, in any of the three chain spans, would result in the complete failure of the entire bridge.

At the time of the bridge construction, a typical family automobile was the Ford Model T, with a weight of about 1,500 lb (680 kg). The maximum permitted truck gross weight was about 20,000 lb (9,072 kg). By contrast, at the time of the collapse, a typical family automobile weighed about 4,000 lb (1,814 kg) and the large truck limit was 60,000 lb (27,216 kg) or more. Bumper-to-bumper traffic jams on the bridge were also much more common, occurring several times a day, five days each week, thus causing more stress to the bridge elements.

The bridge failure was due to a defect in a single link, eye-bar 330, on the north of the Ohio subsidiary chain, the first link below the top of the Ohio tower. A small crack was formed through fretting wear at the bearing, and grew through internal corrosion, a problem known as stress corrosion cracking. The crack was only about 0.1 inches (2.5 mm) deep when it went critical, and it broke in a brittle fashion. Growth of the crack was probably exacerbated by residual stress in the eyebar created during manufacture.[citation needed] The bridge was a victim of insufficient redundancy.

When the lower side of the eyebar failed, all the load was transferred to the other side of the eyebar, which then failed by ductile overload. The joint was then held together only by three eyebars, and another slipped off the pin at the center of the bearing, so the chain was completely severed. Collapse of the entire structure was inevitable since all parts of a suspension bridge are in equilibrium with one another. Witnesses afterward estimated that it took only about a minute for the whole bridge to fall.

The damage to the link would have been difficult to see during inspection of the bridge:

Inspection prior to construction would not have been able to notice the tiny crack. ... the only way to detect the fracture would have been to disassemble the eye-bar. The technology used for inspection at the time was not capable of detecting such cracks.[3]

The collapse focused much needed attention on the condition of older bridges, leading to intensified inspection protocols and numerous eventual replacements. There were only two bridges built to a similar design, one upstream at St. Marys, West Virginia, and the notably longer Hercilio Luz Bridge at Florianópolis, Brazil. The St. Marys bridge was immediately closed to traffic and the bridge was demolished by the state in 1971. A small truss bridge was kept to allow access to an island in the river. The Hi Carpenter Memorial Bridge was later built to replace the demolished bridge. The Hercilio Luz Bridge remained in active service until 1991 and still stands at Florianópolis due to being built to a higher safety factor than the West Virginia bridge. Modern non-destructive testing methods allow some of the older bridges to remain in service where they are located on lightly traveled roads. Most heavily used bridges of this type have been replaced with modern bridges of various types.

The collapse inspired legislation to ensure that older bridges were regularly inspected and maintained, however aging infrastructure is still a problem in the United States. In 1983 the Mianus River Bridge in Greenwich, Connecticut, collapsed, causing the deaths of three drivers. The I-35W Mississippi River bridge disaster in 2007 resulted in 13 deaths. In early September 2009, the failure of an eyebar in the San Francisco–Oakland Bay Bridge was discovered during a scheduled closure, resulting in an emergency repair to reinforce the failed member.

A scale model of the original Silver Bridge can be seen at the Point Pleasant River Museum. An archive of literature about the bridge is kept there for public inspection. On the lower ground floor, the museum displays an eyebar assembly from the original bridge.

A memorial was installed in Point Pleasant to commemorate the 46 bridge collapse victims.

Reviewing the collapse and subsequent investigation in his 2012 book To Forgive Design, engineering historian Henry Petroski finds it "a cautionary tale for engineers of every kind". As a result of the thoroughness of the investigation, the cause of the disaster was precisely and indisputably found to be "a design that inadvertently made inspection all but impossible and failure all but inevitable. If ever a design was to blame for a failure, this was it".[4]

He does not fault the bridge's designers, who were ignorant of many of these hazards. Instead he points to the future. "If there is anything positive about the Silver Bridge failure", he concludes, "it is that its legacy should be to remind engineers to proceed always with the utmost caution, ever mindful of the possible existence of unknown unknowns and the potential consequences of even the smallest design decisions".[4]