Silver goblet presented to the Tsar of Russia by John III Sobieski King of Poland, 17th century, over 1m height.

A silversmith is a craftsman who crafts objects from silver. The terms "silversmith" and "goldsmith" are not exactly synonyms as the techniques, training, history, and guilds are or were largely the same but the end product may vary greatly as may the scale of objects created. However most goldsmiths have also worked in silver although the reverse may not be the case.

Silversmith is the art of turning silver sheet metal into hollow ware (dishes, bowls, porringers, cups, candlesticks, vases, ewers, urns, etc.), flatware (silverware), and other articles of household silver, church plate or sculpture. It may also include the making of jewelry.

In the ancient Near East the value of silver to gold being less, allowed a silversmith to produce objects and store these as stock. Ogden states that according to an edict written by Diocletian in 301 A.D., a silversmith was able to charge, 75, 100, 150, 200, 250, or 300 denarii for material produce (per Roman pound). At that time, guilds of silversmiths formed to arbitrate disputes, protect its members welfare and educate the public of the trade.[1]

Silversmiths in medieval Europe and England formed guilds and transmitted their tools and techniques to new generations via the apprentice tradition. Silver working guilds often maintained consistency and upheld standards at the expense of innovation. Beginning in the 17th century, artisans emigrated to America and experienced fewer restrictions. As a result, silver working was one of the trades that helped to inaugurate the shift to industrialization in America.

In Ethiopia the trade of silversmith was practiced by the Jews of Ethiopia, otherwise known as the Falasha Clan. The activity was considered (by whom?) to be inferior to others, as reliant on manual skills.[2] 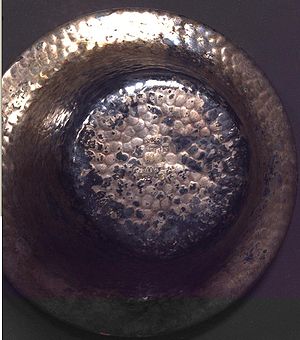 Silversmiths saw or cut specific shapes from sterling and fine silver sheet metal and bar stock, and then use hammers to form the metal over anvils and stakes. Silver is hammered cold (at room temperature). As the metal is hammered, bent, and worked, it 'work-hardens'. Annealing is the heat-treatment used to make the metal soft again. If metal is work-hardened, and not annealed occasionally, the metal will crack and weaken the work.

Silversmiths can use casting techniques to create knobs, handles and feet for the hollowware they are making.

After forming and casting, the various pieces may be assembled by soldering and riveting.

During most of their history, silversmiths used charcoal or coke fired forges, and lung-powered blow-pipes for soldering and annealing. Modern silversmiths commonly use gas burning torches as heat sources. A newer method is laser beam welding.

Silversmiths may also work in copper and brass, although this is usually confined to practice pieces due to the cost of the metals. 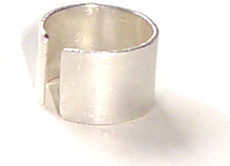 Band made of silver

Although jewellers also work in silver and gold, and many of the techniques for working precious metals overlap, the trades of jeweller and Silversmith have distinct histories. Chain-making and gem-setting are common practices of jewellers that are not usually considered aspects of silversmiths.

The tradition of making (iron / plate) armor was interrupted sometime after the 17th century.[citation needed] Silversmithing and goldsmithing, by contrast, have an unbroken tradition going back many millennia. The techniques used to make armor today (whether for movies or for historical recreation groups) are an amalgam of silversmith forming techniques and blacksmith iron-handling techniques.

In the western Canadian silversmith tradition, guilds do not exist; however, mentoring through colleagues becomes a method of professional learning within a community of craftspersons.[4] 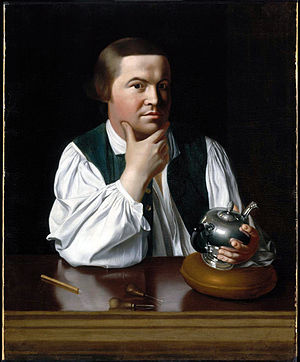