Queen Silvia of Sweden (Swedish pronunciation: ['sɪlvɪa]; born Silvia Renate Sommerlath on 23 December 1943) is the spouse of King Carl XVI Gustaf and mother of the heir apparent to the throne, Crown Princess Victoria. In 2011, Silvia became the longest serving queen of Sweden, a record previously held by Sophia of Nassau.

She is the daughter of the late Walther Sommerlath and Alice Sommerlath (born Alice Soares de Toledo in Brazil).

The Queen has two older brothers: Ralf and Walther Sommerlath. They and their families were guests at the 2010 wedding of Victoria, Crown Princess of Sweden, and Daniel Westling [2] and the wedding of Princess of Madeleine in 2013. Her third brother, Jörg Sommerlath, died in 2006. The Mother-Child House Jörg Sommerlath in Berlin, operated by Queen Silvia's World Childhood Foundation,[3] is named after him.

The Sommerlath family lived in São Paulo, Brazil, between 1947 and 1957, where the Queen attended the traditional German school Colégio Visconde de Porto Seguro and Walther Sommerlath held various positions, including President of the Brazilian subsidiary of Swedish company Uddeholms AB. The family returned to West Germany in 1957.

Before her marriage to the King of Sweden, Silvia Sommerlath worked at the Argentine Consulate in Munich, was an educational host during the 1972 Summer Olympics in Munich, and served as the Deputy Head of Protocol for the Winter Games in Innsbruck in Austria. She also was briefly a flight attendant.

A trained interpreter, Swedish is actually her sixth language. She speaks her native German, her mother's language of Portuguese, as well as French, Spanish, and English. She has some fluency in Swedish Sign Language, a national sign language used by the deaf community in Sweden.[4]

During the 1972 Summer Olympics, Silvia Sommerlath met Crown Prince Carl Gustaf. In a later interview, the King explained how it just "clicked" when they met.

After the death of King Gustaf VI Adolf on 15 September 1973, Carl XVI Gustaf succeeded to the throne.

He and Silvia announced their engagement on 12 March 1976 and were married three months later, on 19 June in Stockholm Cathedral ("Storkyrkan Cathedral") in Stockholm. It was the first marriage of a reigning Swedish monarch since 1797. If he had married Silvia during the reign of his grandfather, King Gustaf VI Adolf, he would have lost his position as heir-apparent to the Swedish throne. This was due to the inflexibility of his grandfather, who believed that royalty must marry royalty. This was also the reason why Carl Gustaf's uncle, Prince Bertil, did not marry until after Gustaf VI Adolf's death. (Bertil was second-in-line to the throne until his nephew produced an heir, and was therefore unable to marry the Welsh commoner, Princess Lilian, with whom he had been in love for decades, until 1976.) In celebration of the forthcoming wedding of the King and the soon-to-be-Queen, Silvia, the internationally famous pop group ABBA performed the song Dancing Queen on Swedish television the night before the ceremony, although the song was not actually written for Queen Silvia.

The King and Queen of Sweden have three children and three grandchildren.

Relationship with the press 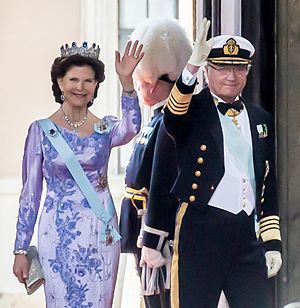 Though initially cool to the idea of a commoner queen, the Swedish press quickly warmed to Queen Silvia and soon began publishing admiring articles about how easily she fit into the country's expectations of queenly deportment. As the Swedish newspaper Svenska Dagbladet noted in 1994, on the occasion of the Queen's 50th birthday, she had revived the popularity of the monarchy. "With Silvia, the republic died. You could put it that way. Even if Silvia's arrival was like kicking someone lying down. Or hitting a guy with glasses. The guy with glasses was mostly to be found with the Social Democrats. A few lines in the party manifesto, ever more vague over the years. It has always been there, but nobody has ever done anything to implement it."[citation needed]

In 2003, Queen Silvia told a Swedish reporter that she and the royal family would like to be more open to contact with magazines and newspapers but that false articles about the family's lives – including photograph montages purported to show the Crown Princess and Princess Madeleine with their "secret" babies, published in the German magazine "Frau mit Herz" – had made them wary. As she told the Swedish news agency TT, "If a person is hurt too much, the natural reaction is to withdraw. That is a pity, because I really think our children are very natural and open toward other people and toward journalists."

In 2002, the Queen became the unwelcome subject of international curiosity when an article published in the syndicalist newspaper Arbetaren reported that German state archives record that the queen's father, Walther Sommerlath, joined the Nazi party's foreign wing, the NSDAP/AO, in 1934, when he was living in Brazil and working for a German steel company. Rumors had long circulated about Sommerlath's life and career during World War II, especially so when his daughter's relationship with the future King of Sweden became known, but until his death in 1990, the businessman denied any connection to the Nazi Party. However, a study of state records further revealed that Sommerlath, in 1938, through the aryanization policies in effect in Germany at the time, became the owner of a steel factory that "produced components for the German war effort, including parts for Panzers, as well as gas masks," according to the Scotsman (20 July 2002). When the revelations about Walther Sommerlath broke in the Swedish press, a palace spokesperson said, "The Queen’s father has never been a part of the Royal Family and therefore I have no comment."

In December 2010, she wrote a letter of complaint to Jan Scherman, the CEO of TV4, the network that had aired a documentary about her father's alleged Nazi past.[5] Queen Silvia commissioned a report from World War II expert Erik Norberg, a choice which was criticized due to Norberg having ties to the Royal Family. In his report, Norberg argued that the Queen's father had in fact helped the owner of the steel-fabrication plant, a Jewish businessperson, escape from Germany by taking over the factory.[6] In a December 2011 interview for Channel 1 with Sweden's public service broadcaster Sveriges Television, Silvia called media's handling of the information about her father "character assassination".[7] 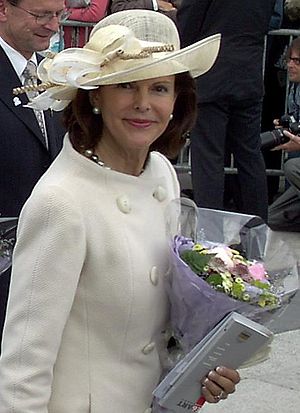 Queen Silvia in Oslo during the celebration of the 100th anniversary of the dissolution of the union between Norway and Sweden.

Queen Silvia is involved in numerous charity organizations, especially in the area of disadvantaged children, and has made several public statements about human rights and children sexual exploitation. On her own initiative, she alone watched videos confiscated by the police, of sexually abused children in an early pedophile tangle. The statement she made to the press became an eye opener for many people that the problem exists.

She was a co-founder of the World Childhood Foundation in 1999, having been inspired by her work as Patron of the first World Congress against Commercial Sexual Exploitation of Children held in Stockholm.[8]

She also works actively for the handicapped, including as Chairman of the Royal Wedding Fund and Queen Silvia's Jubilee Fund. In 1990, she was awarded the prestigious German prize "Deutscher Kulturpreis" for her work for the handicapped. The Queen is also an honorary board member of The Mentor Foundation International, that works against drug use in adolescents and young adults. She is also the Patroness of the "Queen Silvia Fund" operated by the World Scout Foundation which raises funds for Scouts with disabilities.

Her commitment to the work with dementia and the care of the elderly at the end of life is also well known and respected. On her initiative, Silviahemmet was established in Stockholm. It works to educate hospital personnel in how to work with people suffering from dementia, and also initiates research in the area. [9]

The Queen also has brought the subject of dyslexia into the public arena in Sweden. For many years, it was widely rumored that the King has dyslexia. Journalists noted that he misspelled his name when signing his accession document, and in 1973, when visiting a copper mine, he misspelled his name when signing it on a rock wall. In an interview on Swedish television in 1997, the condition was admitted publicly when the Queen addressed the issue. "When he was little, people did not pay attention to the problem," she said. "He didn't get the help he needed."

See also : List of honours of the Swedish Royal Family by country