From Infogalactic: the planetary knowledge core
Jump to: navigation, search
For other uses, see Similarity transformation and Similarity (disambiguation). 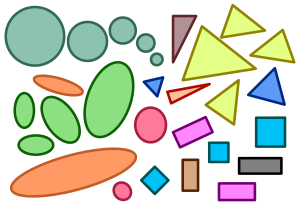 Figures shown in the same color are similar

Two geometrical objects are called similar if they both have the same shape, or one has the same shape as the mirror image of the other. More precisely, one can be obtained from the other by uniformly scaling (enlarging or shrinking), possibly with additional translation, rotation and reflection. This means that either object can be rescaled, repositioned, and reflected, so as to coincide precisely with the other object. If two objects are similar, each is congruent to the result of a particular uniform scaling of the other. A modern and novel perspective of similarity is to consider geometrical objects similar if one appears congruent to the other when zoomed in or out at some level.

This article assumes that a scaling can have a scale factor of 1, so that all congruent shapes are also similar, but some school text books specifically exclude congruent triangles from their definition of similar triangles by insisting that the sizes must be different if the triangles are to qualify as similar.

There are several statements each of which is necessary and sufficient for two triangles to be similar:

1. The triangles have two congruent angles,[4] which in Euclidean geometry implies that all their angles are congruent.[5] That is:

, then this implies that

and the triangles are similar.

2. All the corresponding sides have lengths in the same ratio:[6]

. This is equivalent to saying that one triangle (or its mirror image) is an enlargement of the other.

3. Two sides have lengths in the same ratio, and the angles included between these sides have the same measure.[7] For instance:

This is known as the SAS Similarity Criterion.[8]

and a line segment

one can, with straightedge and compass, find a point F such that

. The statement that the point F satisfying this condition exists is Wallis's Postulate[12] and is logically equivalent to Euclid's Parallel Postulate.[13] In hyperbolic geometry (where Wallis's Postulate is false) similar triangles are congruent.

In the axiomatic treatment of Euclidean geometry given by G.D. Birkhoff (see Birkhoff's axioms) the SAS Similarity Criterion given above was used to replace both Euclid's Parallel Postulate and the SAS axiom which enabled the dramatic shortening of Hilbert's axioms.[8]

Several types of curves have the property that all examples of that type are similar to each other. These include:

A similarity (also called a similarity transformation or similitude) of a Euclidean space is a bijection f from the space onto itself that multiplies all distances by the same positive real number r, so that for any two points x and y we have

where "d(x,y)" is the Euclidean distance from x to y.[16] The scalar r has many names in the literature including; the ratio of similarity, the stretching factor and the similarity coefficient. When r = 1 a similarity is called an isometry (rigid motion). Two sets are called similar if one is the image of the other under a similarity.

, a similarity of ratio r takes the form

is a translation vector.

One can view the Euclidean plane as the complex plane,[21] that is, as a 2-dimensional space over the reals. The 2D similarity transformations can then be expressed in terms of complex arithmetic and are given by

(opposite similitudes) where a and b are complex numbers, a ≠ 0. When |a| = 1, these similarities are isometries.

Ratios of sides, of areas, and of volumes

The ratio between the volumes of similar figures is equal to the cube of the ratio of corresponding lengths of those figures (for example, when the edge of a cube or the radius of a sphere is multiplied by three, its volume is multiplied by 27 — i.e. by three cubed). 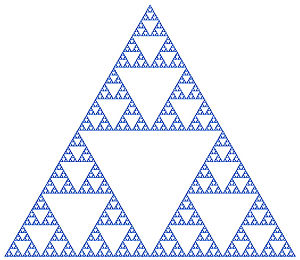 Sierpinski triangle. A space having self-similarity dimension ln 3 / ln 2 = log23, which is approximately 1.58. (from Hausdorff dimension.)

In a general metric space (X, d), an exact similitude is a function f from the metric space X into itself that multiplies all distances by the same positive scalar r, called f's contraction factor, so that for any two points x and y we have

This weaker version applies when the metric is an effective resistance on a topologically self-similar set.

A self-similar subset of a metric space (X, d) is a set K for which there exists a finite set of similitudes

with dimension D given by the formula

which is often (but not always) equal to the set's Hausdorff dimension and packing dimension. If the overlaps between the

are "small", we have the following simple formula for the measure:

In topology, a metric space can be constructed by defining a similarity instead of a distance. The similarity is a function such that its value is greater when two points are closer (contrary to the distance, which is a measure of dissimilarity: the closer the points, the lesser the distance).

The definition of the similarity can vary among authors, depending on which properties are desired. The basic common properties are

More properties can be invoked, such as reflectivity (

). The upper value is often set at 1 (creating a possibility for a probabilistic interpretation of the similitude).