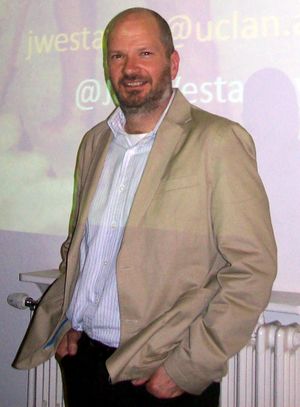 Simon Bainbridge (born 30 August 1952) is a British composer, and a professor and former head of composition at the Royal Academy of Music,[1] London, and visiting professor at the University of Louisville, Kentucky in the United States.

Simon Bainbridge was born in London. He had his first major break with Spirogyra, written in 1970 while he was still a student. This work displays a passion for intricate and sensuous textures that remain the hallmark of Bainbridge’s style today. He was educated at Highgate School and the Royal College of Music. After graduating from the Royal College of Music, he studied with Schuller at Tanglewood; his fondness for American culture is occasionally portrayed in works such as Concerto in Moto Perpetuo (1983), which contains echoes of American minimalism, and the be-bop inspired For Miles (1994). In the 1990s his work took on a new expressive dimension such as in Ad Ora Incerta (1994) which earned him the prestigious Grawemeyer Award in 1997.

Bainbridge was Head of Composition at the Royal Academy of Music from 1999 to 2007, and was one of the first four Professors to be appointed in 2000 with the Academy's status as a constituent college of the University of London.

He is married to English soprano and vocal coach Lynda Richardson, and father to the actress Rebecca Bainbridge.[2] In 1985, Bainbridge played the saxophone solo on Simon May's theme tune to popular TV programme "Howards' Way".