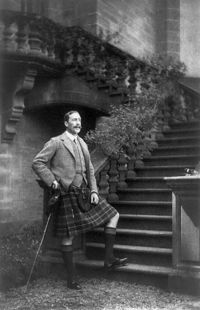 Educated at Ampleforth and Oxford, he was an active member of the Oxford University polo team and left with an MA. Lord Lovat was commissioned into the Queen's Own Cameron Highlanders and promoted Lieutenant in 1890, but transferred as a Lieutenant into the 1st Life Guards in 1894.[1] In 1897 he resigned from the Regular Army and joined a volunteer battalion of the Queen's Own Cameron Highlanders. In 1899 he raised the Lovat Scouts, and served as their second-in-command in the South African War, where he was awarded the Distinguished Service Order in 1900. After the war he was appointed CVO in 1903 by Edward VII.[2]

For the Lovat Scouts, he chose the best marksmen he could find and the perfect commander in the American, Frederick Russell Burnham, who served as Chief of Scouts to Lord Roberts, the British Army Commander-in-Chief.[3] In World War I, he commanded the Highland Mounted Brigade of the 2nd Mounted Division, being promoted Brigadier-General in September 1914. He was appointed a Knight of the Thistle in 1915 for demonstrable leadership and courage.

In March 1916 he took command of the 4th Mounted Division and became a Major General two months later.[4] He became a Rhodes Trustee in 1917, the same year as Rudyard Kipling.

Awarded KCMG in 1919, he was appointed Army Director of Forestry: apart from a military career Lovat was also Chairman of the Forestry Commission from 1919 to 1927 and served in the Conservative administration of Stanley Baldwin as Under-Secretary of State for Dominion Affairs from 1927 to 1929.[5]

Lovat died in February 1933, aged 61, and was succeeded by his eldest son Simon as the 15th Lord Lovat (known as the 17th Lord), who distinguished himself during the D-Day landings at Normandy in June 1944. His younger son Sir Hugh Fraser was a successful politician and first husband of author Antonia Fraser.