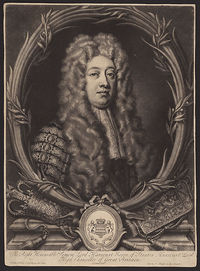 Simon Harcourt, 1st Viscount Harcourt, of Stanton Harcourt, Oxfordshire, PC (December 1661 – 23 July or 28 December 1727) was Queen Anne's Lord Chancellor of Great Britain. He was her solicitor-general and her commissioner for arranging the union with Scotland. He took part in the negotiations preceding the Peace of Utrecht.

He was the only son of Sir Philip Harcourt, of Stanton Harcourt, Oxfordshire (died 20 March 1688), by his first wife, whom he married in 1660, Anne, daughter of Sir William Waller, was born in December 1661 at Stanton Harcourt, and was educated at a school at Shilton, Oxfordshire and at Pembroke College, Oxford. He had four brothers and four sisters from his father's second marriage in 1674 to Elizabeth Lee.

He was called to the bar in 1683, and soon afterwards was appointed recorder of Abingdon, which borough he represented as a Tory in Parliament from 1690 to 1705. In 1701 he was nominated by the Commons to conduct the impeachment of Lord Somers; and in 1702 he became solicitor-general and was knighted by Queen Anne. He was elected member for Bossiney in 1705, and as commissioner for arranging the union with Scotland was largely instrumental in promoting that measure. Harcourt was appointed attorney-general in 1707, but resigned office in the following year when his friend Robert Harley, afterwards earl of Oxford, was dismissed.

He defended Sacheverell at the bar of the House of Lords in 1710, being then without a seat in Parliament; but in the same year was returned for Cardigan, and in September again became attorney-general. In October he was appointed lord keeper of the great seal, and in virtue of this office he presided in the House of Lords for some months without a peerage, until, on 3 September 1711, he was created Baron Harcourt of Stanton Harcourt; but it was not till April 1713 that he received the appointment of lord chancellor. In 1710 he had purchased the Nuneham Courtenay estate in Oxfordshire, but his usual place of residence continued to be at Cokethorpe near Stanton Harcourt, where he once received a state visit from Queen Anne.

In the negotiations preceding the Peace of Utrecht, Harcourt took an important part. There is no sufficient evidence for the allegations of the Whigs that Harcourt entered into treasonable relations with the Pretender. On the accession of George I however, he was deprived of office and retired to Cokethorpe, where he enjoyed the society of men of letters, Swift, Pope, Prior and other famous writers being among his frequent guests. With Swift, however, he had occasional quarrels, during one of which the great satirist bestowed on him the sobriquet of "Trimming Harcourt."

He exerted himself to defeat the impeachment of Lord Oxford in 1717, and in 1723 he was active in obtaining a pardon for another old political friend, Lord Bolingbroke. In 1721 Harcourt was created a viscount and returned to the privy councils; and on several occasions during the king's absences from England he was on the Council of Regency.

Harcourt enjoyed the reputation of being a brilliant orator; Speaker Onslow going so far as to say that "Harcourt had the greatest skill and power of speech of any man I ever knew in a public assembly." He was a member of the famous Saturday Club, frequented by the chief literati and wits of the period, with several of whom he corresponded. Some letters to him from Pope are preserved in the Harcourt Papers. His portrait was painted by Kneller; it was once at Nuneham House.

Many particulars concerning the 1st Viscount Harcourt, and also of his grandson, the 1st earl, are found in the Harcourt Papers.