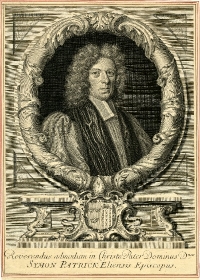 He was born at Gainsborough, Lincolnshire, on 8 September 1626, and attended Boston Grammar School. He entered Queens College, Cambridge, in 1644,[1] and after taking orders in 1651 became successively chaplain to Sir Walter St. John and vicar of Battersea, Surrey. He was afterwards (1662) preferred to the rectory of St. Paul's, Covent Garden, London, where he continued to labor during the plague.

He was appointed dean of Peterborough in 1679, and Bishop of Chichester in 1689, in which year he was employed, along with others of the new bishops, to settle the affairs of the Church in Ireland. In 1691 he was translated to the see of Ely, which he held until his death on the 31st of May 1707. He was buried in Ely Cathedral.[2]

His sermons and devotional writings are numerous, and his Commentary on the Historical and Poetical Books of the Old Testament, in 10 vols., going as far as the Song of Solomon, was reprinted in the 1810 Critical Commentary on the Old and New Testaments and Apocrypha, with works Richard Arnald Moses Lowman William Lowth, and Daniel Whitby.[2]

Patrick's Friendly Debate between a Conformist and a Nonconformist was a controversial tract, defending the Five Mile Act.[2] It excited considerable feeling at the time of its publication in 1668. Among replies was one from Samuel Rolle as Philagathus.[3] He also contributed to a volume of Poems upon Divine and Moral Subjects (1719).

The first collected edition of his works appeared at Oxford in 1858 (9 vols.), edited by Alexander Taylor; a small Autobiography was published also at Oxford in 1839.[2]