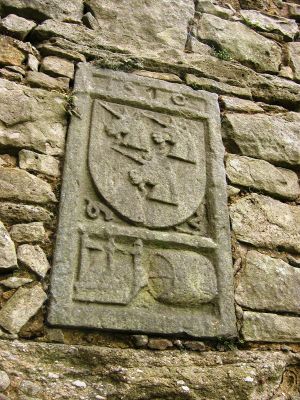 Simon Preston of Craigmillar (c.1510–c.1570), was Lord Provost of Edinburgh during 1565-69 and a member of the Privy Council of Scotland during the reign of Mary, Queen of Scots

In January 1561 Queen Mary sent Simon Preston to Scotland as her envoy. He and his three colleagues were instructed to announce the death of her husband Francis II of France, and her decision to return to Scotland. They came first to Preston's own Craigmillar Castle, and met William Maitland of Lethington. The English diplomat in Edinburgh Thomas Randolph was not very pleased with this news (which did not suit his view of England's foreign policy), but wrote that Preston was the best of the "packe" of four in which "the moste hope is of Cragmellour."[1]

Mary made Simon captain of Dunbar Castle, and in August 1565, at the time of the rebellion called the Chaseabout Raid, she made him her preferred candidate for the Provost of Edinburgh, to replace Archibald Douglas of Kilspindie, (namesake son of Greysteil). Simon was understood to be a Catholic.[2] Preston's loyalty to Mary wavered before her final battle in Scotland at Langside, and on 8 May 1568 he signed a bond with William Kirkcaldy of Grange to defend James VI of Scotland and Regent Moray against her.[3]

Simon Preston had two properties in Edinburgh: one in the city; one in the country, as was the norm of the day. His country residence was Craigmillar Castle, where the garden pond shaped as his initial "P" can still be seen.[4] His city residence (demolished to build South Bridge) was known as the Black Turnpike, and stood on the corner of Hunter Square near the Tron Kirk. Mary Queen of Scots lodged here during her final days in Scotland.[5]